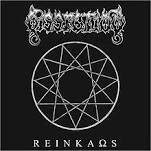 Dissection where a band from Sweden that played a very melodic form of black/death metal and this is a review of their 2006 album "Reinkaos" which was release as a joint effort between Black Horizon Music and The End Records.

Drums alternate between slow, mid paced to fast with a lot of blast beats, while the bass playing has a very dark tone with riffs that follows the riffing that is coming out of the guitars.

Rhythm guitars are a mixture of slow, mid paced to fast melodic black/death riffs that are very melodic sounding that also take influences from thrash and traditional metal, while the lead guitars are very melodic sounding guitar solos, as for the acoustic guitars they bring a lot of darkness and melody to the music as well as some classical influences.

Vocals are mostly high pitched black metal screams with the last song having clean singing female vocals, while the lyrics cover Anti Cosmic Satanism, Left Hand Path, Qlipoth, Sumerian, Egyptian, Norde and Eastern Occultism as well as alchemy, as for the production it has a very heavy and professional sound to it.

In my opinion this was a very good album from Dissection and while some of their more hardcore fans did not enjoy this album, I still liked it a lot because it went deeper into the occult than their previous albums. RECOMMENDED TRACKS INCLUDE "Black Dragon" "Dark Mother Divine "God Of Forbidden Light" and "Maha Kali". RECOMMENDED BUY.

Posted by OccultBlackMetal at 11:19 PM No comments: