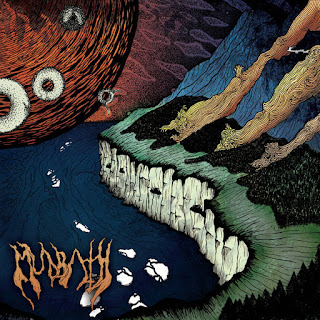 Clean  guitars  and  drum  beats  start  off  the  album  along  with  some  powerful  sounding  bass  guitars  a  few  seconds  later  and  after  awhile  heavy  yet  melodic  riffs  make  their  presence  known  along  with  some  high  pitched  screams  that  are  very  heavily  influenced  by  black  metal  and  most  of  the  tracks  are  long  and  epic  in  length.

Mudbath  creates  another  recording  that remains  true  to  the blackened  mixture  of  stoner,  sludge,  and  doom  metal  from  previous  releases,  the  production  sounds  very  professional  while  the  lyrics  cover  dark  themes.

Posted by OccultBlackMetal at 1:29 PM No comments:

Luke (drums, vocals): We've been concentrating on getting the album released for most of the year but we've also been setting a lot of plans in motion for 2015, which'll hopefully be a pretty busy year for us. We also played a small handful of local gigs with some bands we like that were coming through the area this year.

2. You have a new album coming out in 2015, how would you describe the musical sound that is presented on the recording and also how does it differ from the EP you had released in 2012?
Marco: It's not really the same band any more! After our singer Félix left the band in 2013, Flo, Mika (guitars) and Luke decided to handle vocal duties, and the result is even more harsh and aggressive than before. Musically speaking, the stoner blues influences have almost completed subsided to make room for a darker, deeper, more violent and deranged atmosphere. We basically just followed our collective instinct and made the music we felt like making at the time. The ritualistic doom/drone parts, the fist-to-the-mouth hardcore forays, the synths and effects... all of that wasn't to be found on the EP because there was a concern for staying within certain boundaries at the time. For Corrado Zeller, we didn't set ourselves any guidelines and just let it come together naturally. A healthy amount of substance abuse came in handy as well.

3. What are some of the lyrical topics and subjects the band explores with the newer music?
Luke: We wrote a bunch of lyrics and recorded them but decided not to include them with the album because we don't want to 'pollute' the music with any kind of message. There are a lot of bands out there all saying the same shit and we're just not interested in being a part of that. It's all about the music.

4. What is the meaning and inspiration behind the name 'Mudbath'?
Marco: We wanted something evocative and straight-to-the-point, and Cleveland Steamer was already taken.

5. What are some of the best shows that the band has played over the years?
Marco: In 2012 we played at a place called La Ferme de Mauriac, a community farm deep in the hills in France. It was pretty incredible. They had a grindcore goat there, running around the room and stage during the gigs and attacking fucking German Shepherd dogs. There was also this guy on acid that thought we were terrorists or something – the guy was scared shitless, I though he was going to attack us while screaming the US national anthem. Last but not least, the riot grrrl-like band that we were playing with that night kindly offered, right in front of their kids, for us all to fuck them in the ass. Other than that the gig was OK, even if one of the girls from the other band grabbed a mic and started rapping over Smells Like Teen Cunt.

Luke: The last gig we played on our tour last year near Frankfurt, Germany was a weird experience too. We arrived at the venue, set up the gear and did the soundcheck, and literally no one turned up. The local act played their set in the hopes that a few people might walk in but no one did. The promoter offered for us not to play and still get the gas money, and we were tired and annoyed and had a lot of driving to get home so we nearly took the offer, but in the end we just figured “our gear's set up, there's four guys here who just played a whole gig in front of no one but us – fuck it, let's just play”. The other band grabbed a couch and sat on it in the middle of the room and we gave it everything we had left. My mic broke within the first 5 minutes so I was just screaming into thin air for the rest of the show. What was looking to be a really shitty night suddenly ended up being one of the most exhilarating and intense live experiences we've ever had.

Flo: For me it has to the last time we played at KTS, a really cool squat in Freiburg, Germany, with our buddies Haut&Court from Strasbourg. After the show people went home and we got completely wasted and jammed for an hour or two on the stage with Haut&Court, with everyone switching instruments. Then they left too and we just played drunk black metal by ourselves non-stop for two hours. I remember doing a really long blast-beat and thinking to myself “dude you're so good at this” haha. Then we went down to the basement, where they had practice rooms. There were two random guys playing there and we just started playing psychedelic blues stoner rock-ish stuff with them, and Marco, who usually never goes near the mic, was yelling into it for over an hour. Basically we started playing around 11 pm and didn't stop until 5 am. Definitely my favorite show. And the next day Luke puked for hours on end and then drove us to Strasbourg.

Mika: Same as Flo, that was insane. I think the balloons they had everywhere made us feel like kids again all of a sudden.

6. Do you have any touring or show plans once the new album is released?
Marco: We're going to be touring through France, Switzerland, Austria, Croatia and Slovenia from Jan 23rd to 31st, with the final gig being the release party for Corrado Zeller in Montpellier, where Lost Pilgrims Records is based. We'll also certainly play as much as possible everywhere we can in France in 2015 before another Euro tour at the end of the year.

7. The new album is coming out on Lost Pilgrims Records, are you happy with the support they have given you so far?
Marco: Yes, we are. Geraud from List Pilgrims has always given us a hand one way or another since we started out, and it's a real pleasure for us to work together with him on the release of our first LP.
Grains of Sand Records (Russia) and Désordre Ordonné (Canada) are also working with us to bring Corrado Zeller to their respective geographical areas. We're stoked that people are interested in our music thousands of miles away from where we live, especially people that work with many bands we all love.

9. Where do you see the band heading into musically during the future?
Marco: Something honest and brutal, whether it's sludge, doom, black metal, hardcore or full on r&b.

Flo: We don't want to set ourselves any boundaries for the future, although I hope our music will always be recognizable as our own. We're inevitably influenced by all kinds of bands but I think there's a certain color to our riffs. That's how it feels when we compose anyway. All I can say at this point is it looks like the next album will contain more notes than Corrado Zeller.

10. What are some of the bands or musical styles that have had an influence on your music and also what are you listening to nowadays?
Marco: There aren't many bands that we all agree on in Mudbath. There are a few bands we all really enjoy such as And So I Watch You From Afar, but we can't really count them as influences on our music. Mika, for example, is more influenced by Rob Crow's work than any doom album.

Mika: On a day-to-day basis I tend to listen to music that's nothing like what we play, partly so it doesn't influence me when I'm writing music for Mudbath. I really like Rob Crow and the plethora of bands and projects he's involved with - Other Men, Thingy, Goblin Cock, Physics, Heavy Vegetables, and more. His melodies, harmonies and mathematical construction really give off a unique atmosphere. I always go for atmosphere over riffs. Boards of Canada's The Campfire Headphase, Bongripper's Miserable or Code Orange's I Am King are a few albums I find absolutely breathtaking, without forgetting my earlier influences such as Orange Goblin and Electric Wizard, or even Nobuo Uematsu's piano work on the Final Fantasy series. That's what inspires me and that's what I want to explore with Mudbath – atmospheres.

Luke: I guess we all bring our own influences to the music. One band that definitely influenced me is Monarch!, an awesome French drone doom band you should definitely check out if you haven't already. The distilled hatred and filth of Kickback has always been a great influence for me too, as has the sheer intensity and honesty of The Chariot.
At the moment some of the records I'm playing constantly are the new Blut Aus Nord, Mayhem, Swans and Run The Jewels albums, Baptists' Bushcraft, Abbe May's Design Desire, Julie Christmas' solo album, an old album by Blonde Redhead, Ghostface Killah's Supreme Clientele, the new EP from Igorrr and Ruby My Dear, as well as Poisse, the first EP from Fange, a stupidly heavy new band from Rennes, France.
Flo: Of course we're influenced by a lot of slow, dirty, and/or psychedelic doom bands, mainly Bongripper, Cough, Thou, YOB, Earth... But unlike Red Desert Orgy, that sounded very stoner/sludge, Corrado Zeller sounds a lot more oppressive and violent. Rorcal's Vilagvege and Oathbreaker's Eros|Anteros undoubtedly influenced me towards this new direction. Before we started the recording sessions we went on a retreat to an isolated house in the mountains, where Luke introduced us to Mare, a unique and brilliant Canadian band that just recorded one EP 10 years ago. We were pretty high all the time there and I'm sure that listening to that band helped shape our approach to some final arrangements on the album. Rob Crow, Grails and Mono don't really have much to do with Mudbath but they've definitely been big influences for me.
Recently I've been listening to the most recent albums by YOB, Earth, Impure Wilhelmina and Code Orange quite a bit, but also a lot of psych rock like Myrrors, The Wytches, Witch, etc. Just in the last few days I've been listening to the latest EP from Selenites like crazy.

11. What are some of your non musical interests?
Marco: Answering interviews.
Luke: In the words of a great American poet: “Money, cash, hoes”.
Flo: Hanging around with my bitch, driving her to the kebab joint - the easy life.
Mika: Fishing. But nobody knows that. And I don't like fish.


Marco: Thanks for your interest and thanks to the people who are reading this. Corrado Zeller is already streaming in full on our Bandcamp and will be available on vinyl on Jan 31st. It's going to be heavy as a really heavy thing.

Posted by OccultBlackMetal at 10:28 PM No comments: 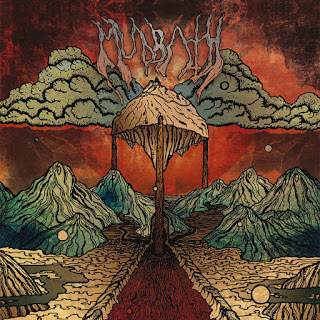 Posted by OccultBlackMetal at 2:09 PM No comments: