We are in the final steps for the release of our new album “Incendium” and can’t await the first reactions. “Ekpyrosis (Periodic Destruction)” was received really well and it will be interesting to hear what people think about our new stuff in relation to that.


Right before the release we are going to play some selected shows and we’ll present some of the new tunes for the first time. Everything is really exciting.

2. How would you describe the musical sound of the new album and how it differs from previous recording?


The music on “Incendium” is much more diverse than what we did before. There is a lot going on. We have acoustic guitars as well as interludes with a more symphonic appeal. We extended the range of ingredients a lot. It’s still (Melodic) Death Metal with a progressive attitude and influences of Black and Thrash Metal but the “mixing ratio” is different.


But aside from just being more diverse the new album is also arranged in a way that it sounds more like one big entity. Sometimes we transfer melodies from one song into another by putting them into a different musical context. This may not be obvious in the first place, but even if you don't realize it, it (hopefully) makes the whole record more accessible for the listener.


Production wise, it was also a big step for us. Even if it was the same studio (Soundlodge) and producer (Joerg Uken), we had a lot more time and you can hear that on the new record. It sounds a lot more powerful.

3. Can you tell us more about the lyrical concept of the new recording?


The lyrical concept is influenced by parts of the book “Fahrenheit 451” by Ray Bradbury. The setting is a near future in which people aren’t allowed to read. The job of the firemen is to burn books and the protagonist is one of them. But something is different with him. Some special incidents change his view and he goes through a metamorphosis, from a blind follower to a resolute opponent of the system.


Back in the day, we just wanted a name that fits our preferred musical genre. Yet as time went by, the meaning changed. “Burial Vault” is not just a ‘crypt’ but a fictitious icon of a society that is not very careful for its environment. Humanity starts wars, sticks at nothing and maybe one day we all will end in the “Burial Vault”.


That’s a tough one. The show at Legacyfest 2009 was a very remarkable one for us. It was the first time we played a festival of that size and it was a blast.


But we also played some very great smaller club shows. Last year we played two shows in a row in Eastfrisia (Northern Germany) and they were awesome, too. Eastfrisia is not that far from our hometown Papenburg and sometimes we think that we know all the “metalheads” over there. But these two shows really surprised us. It felt like it was the first time we played there.


Our stage performance is very minimalist on the one hand but very energetic on the other hand. The focus is always on the music. So we go on stage, dressed in black and give the best of us.

6. Do you have any touring plans for the new release?


We don’t have particular touring plans so far. But we want to plan something in the near future so keep on checking our page.

7. On a worldwide level how has the feedback been to your music by fans of extreme metal?


To be honest, we’re blessed if we know ;) But we realized that something’s going on there. On Facebook the number of followers increased immensely since the release of “Ekpyrosis (Periodic Destruction)” and sometimes we achieve mails from somewhere outside of Germany by people who like our stuff.

8. What is going on with the other musical projects these days?


We’re not sure about this question.


If you want to hint at other musical projects in general, we’ll say that it is quite hard for musicians these days. You can’t blame people for downloading music that they are interested in. Music shall be for everyone. The problem is that people don’t worship what they hear. It is hard work to write, rehearse and record music. And it costs a lot of money to do this. Don’t misunderstand that, it’s not about the money. We don’t want to be the next big thing and get rich, but it is indeed an immense cost factor to be an artist (or whatever you want to call us ^^).


Our main goal is to not record the same album twice. We try to evolve and to extend our musical range. We have no idea where this rollercoaster ride will take us but it will be different from “Incendium”.

10. What are some bands or musical styles that have influenced your newer music and also what are you listening to nowadays?


We all have very different personal interests. Some of us like movies, others are more into sport. We also have our jobs or go to university. Life is a full-time job.


Thanks for the interview. We really appreciate your support. It truly means a lot to us!

Posted by OccultBlackMetal at 7:33 PM No comments: 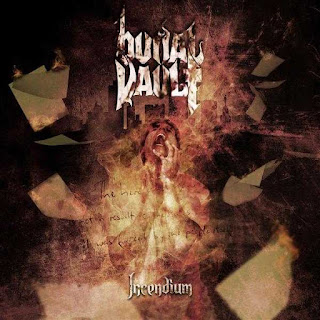 Rhythm  guitars  range  from  slow,  mid  paced  to  fast  riffs  that  combine  technical  and  brutal  death  metal  with  melodic  black  metal  together  to  create  a  sound  of  their  own,  while  the  lead  guitars  are very  technical  and  melodic  sounding  death/black  metal  guitar  solos  and  leads,  as  for  the  acoustic  guitars  when  they  are  utilized  they  use  finger  picking  and  full  chords  to  add  some  progressive  moments  to  the  recording.

Posted by OccultBlackMetal at 9:35 PM No comments: