1.For those that have never heard of you before, can you tell us a little bit about the band?
The band get started in late 2010 as four friends with the passion for music planned to write few songs for themselves. With some time the project got bigger, with two members more and the first shows. After the EP and the signing with our previous label, we found a new and final member for the completeness of our sound, introducing bagpipes and whistles in the line up.

2.You got a new album coming out this month, how would you describe the musical sound that is presented on the recording and also how does it differ from the demo you had released in 2013?
We started with an idea around the viking/folk metal sound, but, dealing with our different influences, we tried to manage a sound which could contain and harmonize our styles, creating a mark which could define us out of any specific label.
This, however, wasn’t planned on the start, but was a spontaneus evolution, as each member of the group played a part in the writing of both the music and the lyrics.
Basically, the main difference between the two releases is the integration of the new member, and his contribution with typical folkish instruments.

3.The band has been around since 2010 but so far have only released one demo and a full length, can you tell us a little bit more about the gaps in between releases?
At about half 2014 the new member was found, and it took time to integrate him and to rewrite the songs, allowing him to find his place.
The album was almost finished, and we wanted it to be in the higher quality possible; so the recordings were quite expansive and we decided to wait rather than lower the final quality. However, the recordings took place in autumn 2015, and Memory of a Man was just waiting for a label for the whole 2016.

4.What are some of the lyrical topics and subjects the band explores with the music?
Despite the topics that could be found across the lyrics, our most interest was in the tale itself, in its plot, in its development. Our own stories run through the songs, camouflaged in metaphors and assembled in the life moments of the Man of whom we speak.
His memories are but our feelings and sensations: his anger is our anger; the stories differ.

5.What is the meaning and inspiration behind the name 'Dusius'?
The name "Dusius" was chosen with inspiration. The term was accidentally found by Manuel Greco in one of his lectures about post-Roman civilizations. He read that the word was in use in some late-medieval gaelic dialect, with a clear latin influence (dusius, dusiī). The exact origin is controversial, but the meaning is confirmed to be "Spirit" or "Monster", or, as that book itself declared, "Spirit of the Wood". The name enchanted us swiftly, as it reflected our folkish purpose.

6.What are some of the best shows that the band has played over the years and also how would you describe your stage performance?
We recall every show gladly, but some of them occupy a special place in our memory.
Our first show was amazing for us; we have had the pleasure to play at the party for the 50th anniversary of Amnesty International. We were headliners right in the downtown of Parma! The public response was totally unexpected: they were thrilled, and so were we. A superb start, indeed.
The show we had at the Aemilia Folk Fest was another memorable one. This was a folk-metal festival, so the public was focused. The fact is that the stage was declared unsafe during the soundcheck, so that in response we placed our amps on the grass, wired them, and played between trees in a wonderful summer night, with lots of fine folks.
Leaving all together the italian borders was the best experience. Every day of our european tour have been unique and awesome! The shows in Opava and in Prague were the most amazing, the music and the people were very high, and we did our work good and well.
We are as natural as possible onstage, we bring self irony and cheer, 'cause there is always room for laugh! We bring passion nonetheless, and we do our best and we're as professional as the situation needs.

7.Do you have any touring or show plans for the new album?
We are currently considering some opportunities. We'll certainly have more shows in Italy, but we heartly hope to come back abroad, having shows throughout Europe.

8.The album is coming out on 'Extreme Metal Music', can you tell us a little bit more about this label?
We are new in the label, so that it's pretty hard to have impressions about. Up to now we are feeling cool: they're looking after us with experience and helping us with great attention.

9.On a worldwide level how has the feedback been to your music by fans of viking and folk metal?
So far, we had a discrete feedback in the Eastern Europe and in Spain; we are very glad to have had a great appreciation by non-folk/viking fans.

10.Where do you see the band heading into musically during the future?
We already have some big project for the future, in which we are giving more space to our folkish side, trying to stay in the never-heard. We are also focusing on different concepts and topics, hoping to bring up something as various as we can for our new works.
We are currently working a lot on the technical side, trying to improve our abilities a

11.What are some of the bands or musical styles that have had an influence on your music and also what are you listening to nowadays?
We all have different musical tastes, so the answer may sound weird and non-linear. Our influences clearly are what can be heard in the album. To name some, we listen to: Metallica, Tom Waits, Ensiferum, Guccini, Ayreon, Eluveite, Jethro Tull and Pain of Salvation.
Yes, that's just a few, but all of these listening had a weight in the writing of our songs.

12.How would you describe your views on Paganism?
Made an except of a certain common fascination, we have no peculiar vision or interest on Paganism. It is precisely why we decided not to include any specific referring to cultures or religions inside our tale.

13.What are some of your non musical interests?
We have interests around literature, theatre, art, cinema, photography, woodcraft, tipography.

14.Before we wrap up this interview, do you have any final words or thoughts?
For all those who have always supported us, we want to say that we intend to keep on working hard, and we hope to continue to have so much fun together. Our friendship is very important to us, and we hope that never dies, regardless of the fate of the band itself.
Thank you so much for giving us this opportunity, it was a pleasure to answer your questions.

Posted by OccultBlackMetal at 7:37 PM No comments: 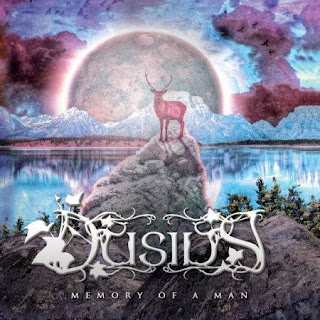 Dusius  plays  a  musical  style  that  takes  folk,  viking,  melodic  black  and  death  metal  and  mixes  them together  to  create  a  sound  of  their  own,  the  production  sounds  very  professional  while  the  lyrics  cover  Paganism  and  Fantasy  themes.

https://youtu.be/67c_K6QOoPY
Posted by OccultBlackMetal at 2:47 PM No comments: