1. Can you give us an update on what is going on with the band these days?

We just released the new album “The Engineered Flesh” via ALIVE Distribution and are very glad about the reactions so far. The promotion is still going on and at the same time we are planning concerts for 2014.


2. How would you describe the musical sound of the new album and also how does it differ from previous releases?

Our sound in general is a mixture of melodic black and death metal. Most songs are high-speed and there are classical influences by using piano or strings as well as influences of electro music by using synthesizer sounds. Compared to the albums before “The Engineered Flesh”, the songs are catchier and there is more variety among them. Probably the biggest difference and the most interesting aspect of “The Engineered Flesh” is the stronger influence of electro music. Nevertheless, this is still extreme metal and not music for the dance floor.


3. What are some of the lyrical topics and subjects the band explores with the new release?

The album title “The Engineered Flesh” stands for the overall concept behind the album. It is about the artificial enhancement and preservation of humans by nanotechnology, genetic engineering, and robotics – a philosophical direction called transhumanism. Music, lyrics, and artwork have been tailored precisely to this concept. Besides life extension or healing mortal diseases, which query the necessity of believing in a higher power, I also discuss topics such as cryonics, soul transfer, or character improvement. I purposely skipped Hollywood topics like misusage of such technologies by terrorists and government to concentrate on more realistic issues like potential consequences or side effects for individual humans.


4. What is the meaning and inspiration behind the name Lyfthrasyr?

“Lifthrasir” was one of two survivors of the apocalypse “Ragnarök” in Nordic mythology. The idea behind the name Lyfthrasyr is to point out the roots of our music (Nordic black metal) on the one hand and to emphasize the beginning of something new on the other hand. The two “i” have been replaces by “y” to make the name unique. Lyfthrasyr shall be linked to the band only and not to Nordic mythology.


5. What are some of the best shows that the band has played over the years and also how would you describe your stage performance?
My personal highlights were the concerts at WGT 2006 with about 2000 people and at the Global East Rock Festival 2011 with more than 1000 people in front of the stage. I also really enjoyed the whole European tour 2007 with Behemoth and Kataklysm as well as the Russian tour in 2011. In general, our show is meant to be an extraordinary performance. We don’t wear band shirts on stage but focus on a morbid, cold, and modern appearance. There is a lot of fog and we use own light effects which are synchronized to the music. Furthermore, the interaction with people during the show is very important for us, so I try to stimulate and motivate the crowd all along. With Nefastus we found the perfect drummer for Lyfthrasyr. On stage he plays like a precision machine.


6. Do you have any touring or show plans for the future?

In 2014, we will definitely focus on playing concerts again as the last concert took place long ago in late 2012. If there might be an offer for a tour with a well-fitting band package, we will accept it. But there is nothing clear, yet, so I don’t want to announce concerts at the moment.


7. Recently the band signed to ALIVE Vertrieb, can you tell us a little bit more about this label?

ALIVE Vertrieb is a professional distributor and guarantees that our new album is available all along Europe in online shops and real stores. Actually, I would have preferred to sign a contract with a record label but the offers we got were not convincing, unfortunately. However, being signed to a label is not really necessary anymore nowadays since promotion and distribution can be easily outsourced to professional companies just as we did.


8. On a worldwide level how has the feedback been to your music by fans of black and death metal?

It is fantastic to get good feedback and orders from countries far away from Germany such as USA, Canada, Russia, or Japan. I was also very impressed when people came to me after the concert in Kiev/Ukraine, where we never played before, and said they have been waiting for us to play here since many years. The internet made it easy to reach people worldwide and this is great. However, since our promoter and distributor operate primarily in Germany, most of our feedback is coming from Germany and the nearby countries, of course.


9. What direction do you see your music heading into on future releases?

That’s a good question. At the moment I guess, future songs might be of a more mature style compared to the songs on the new album “The Engineered Flesh” combined with some new influences which even I can’t predict so far. I really like the strong influence of electro music, so I definitely want to keep that and refine it.


10. What are some bands or musical styles that have influenced your newer music and also what are you listening to nowadays?

During songwriting I listened a lot to Rammstein, The Prodigy, Machine Head, or Turmion Kätilöt. Currently I enjoy listening to classic rock such as W.A.S.P., Mötley Crüe, or Iron Maiden.


11. Outside of music what are some of your interests?


12. Any final words or thoughts before we wrap up this interview?

Check out the new songs and videos and visit our concerts! We highly appreciate your support! Thanks a lot for this interview! 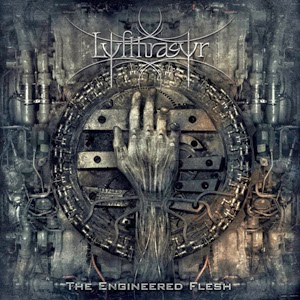 "Soul  Transition  Interface"  begins  with  atmospheric  and  symphonic  sounding  synths  before  adding in  heavy  guitar  riffs  and  blast  beats  from  the  drums  before  going  for  a  more  mid  paced  symphonic  black  metal  direction  and  adding  in  death  metal  growls  along  with  some  whispers  and  then  the  song  starts  alternating  between  fast  and  mid  paced  parts  and  you  can  also  hear  bass  guitars  in  certain  sections  of  the  song  as  well  as  bringing  in  industrial  and  electronic  music  elements  and  as  time  goes  on  by  high  pitched  black  metal  screams  start  becoming  a  part  of  the  song.

"Technological  Singularity"  kicks  in  with  industrial  style  synths  before  adding  in  heavy  guitar  riffs  and  drums  and  a  few  seconds  later  whispers  start  coming  in  before  going  more  into  death  metal  growls  and  black  metal  screams  and  halfway  through  the  song  the  guitars  start  utilizing  some  melody.

"Mind  Simulator"  starts  up  with  industrial  and  electronic  music  sounds  along  with  some  symphonic  synths  before  adding  in  heavy  guitar  riffs  and  drums  and  then  industrial  style  vocals  start  to  kick  in  and  evolve  into  black  metal  screams  shortly  after  that   as  well  as  the  guitar  riffing  getting  a  lot  more  melodic  and  then  the  song  starts  alternating  between  soft  and  heavy  parts  and  also  adding  in  death  metal  growls  and  powerful  sounding  bass  guitars.

Song  lyrics  cover  scientific  themes,  while  the  production  has  a  very  strong,  powerful,  heavy  and  professional  sound  for  being  a s elf  released  recording  where  you  can  hear  all  of  the  musical  instruments  that  are  present  on  this  recording.

http://youtu.be/OX63kYiWrMQ
Posted by OccultBlackMetal at 8:00 PM No comments: