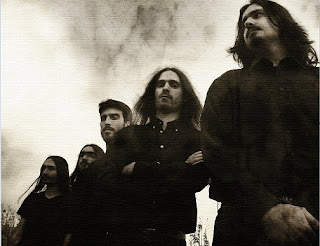 1.For those that have never heard of you before, can you tell us a little bit about the band?
Hi, and thank you very much for this interview!
We are a progressive death metal band strongly influenced by bands as Opeth, Ihsahn, Enslaved. Founded in Toulouse at the beginning of 2012 by the Composer-Singer-Guitar player Fred Blanchard. A few months later, our first EP “Architecture of plague” came out, we played some gigs in the southwest of France while working on our first album.

2.Recently you have released your first full length, how would you describe the musical sound that is presented on the recording and also how does it differ from the ep you had released in 2012?
To us, this album is following the same line as our first EP recorded in 2012, even if songs are different, they are less experimental more intelligible for the audience. About the sound now, we have maintained a natural and human touch, but in a professional studio this time. We are all very satisfied of this!

3.What are some of the lyrical topics and subjects the band explores with the music?
The lyrics tell to the listener some mysterious and unnatural stories… even for us! ^^
Stories to be more specific could be considered like “Thrillers”, in wich victims and guilty are present. For example, the first four tracks in the album tell about two young boys who kill their mother because they are driven by a kind of supernatural ghost entity … but I’m not going to spoil anything, I prefer to let the curious read the booklet!


4.What is the meaning and inspiration behind the name 'Havenless'?
As I said previously, in our stories, victims are present and their aggressors always achieve their goal . So these victims are helpless against this fantastic strength, without refuge… Havenless.
This is also a music title from a band I particularly appreciate: Enslaved

5.What are some of the best shows that the band has played over the years and also how would you describe your stage performance?
Our best souvenir: I would like first to mention a live in Albi to celebrate 10 years of “Une nuit en enfer” with Necrocult, Trashnasty and Oldskull , the ambiance was perfect! The show in Montpellier with “Negura Bunget” and finally our live in Montblanc, at the “Garrigue fest” with our friends “Orob”!
I think we have been improving and we can’t wait to play our full album on stage next year!

6.Do you have any touring or show plans for the new album?
We are now in the progress of organizing a tour in the north of France with “Orob” for February 2015. We will also participate in a maximum of concerts and competitions to promote best as possible our first new album!

7.On a worldwide level how has the feedback been to your music by fans of progressive and extreme metal?
People liked our first EP, but we haven't really been able to export our music a lot ... that’s why we signed with the international label “Wormehole death”. Famous French webzines and magazines have supported us (such as Rock Hard, Metallian) but each reviews always ended with sentences like: “so excited to hear a complete album”!

8.What is going on with some of the other musical projects or bands these days that some of the band members are a part of?
Other projects of members in the band are not very active at the moment, exception for projects of our new bass player “Christine Lanusse” (Qantice, Hretghir, Brain Collapse)
Ben, our guitar player, plays with his cover band 70’s “Devik” on a regular basis & Fred (singer guitarist) project, Osuaire (old school death metal) is currently preparing an album.

9.Where do you see the band heading into musically during the future?
We’ll just let the music evolve in our future songs certainly with more clean vocals. As it starts with our new songs of the future second album, the atmosphere is in the way to be more 70’s while remaining melodic death metal! And we are working to have our sound evolving also.

10.What are some of the bands or musical styles that have had an influence on your music and also what are you listening to nowadays?
The main musical genres, which our composer is inspired by are Swedish metal, progressive rock, Doom/death metal, heavy metal of course and nice bands of non-traditional black metal.
To cite some band names : Opeth, Ihsahn, Katatonia, Hypocrisy, Emperor, Enslaved, Bathory, Ereb Altor, Isole (best doom/death band ever!), Porcupine tree, Steven Wilson project, etc… they are to many.

11.What are some of your non musical interests?
We don’t have a lot of non-musical interest…Just our drummer “Romain” wich is a Geek! Chris also likes photography.

12.Before we wrap up this interview, do you have any final words or thoughts?
We wish to thank you once again for your interest in our band and interest for our first album! I have no doubt that progressive melodic metal lovers will like it !

Rock’on !
Posted by OccultBlackMetal at 3:59 PM No comments: 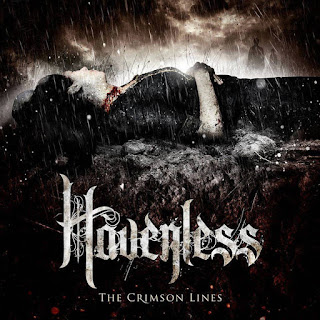 Havenless  plays  a  style  of  death  metal  that  is  very  progressive  bringing  back  to  the  early  Opeth  sound  while  also  mixing  it  with  some  of  the  more  progressive  element s of  the  Norwegian  scene  to  create  a  very  dark  and  heavy  sounding  recording,  the  production  sound s very  professional  while  the  lyrics  cover  dark  and  mysterious  themes.

http://httpv://youtu.be/0r0y4kIWXFw
Posted by OccultBlackMetal at 2:02 PM No comments: