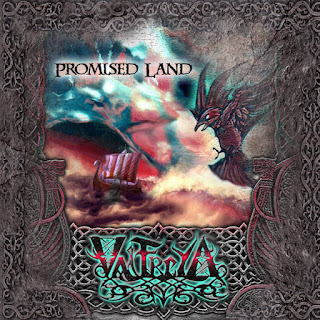 Stringed  instruments  start  off  the  album  along  with  some  symphonic  elements  and  keyboards  a  few  seconds  later  and  after  the  intro   they  go  into  a  heavier  direction  while  also  keeping  the  symphonic  elements  and  the  vocals  also  bring  in  a  mixture  of  death  metal  growls  and  black  metal  screams  while  the  solos  and  leads  are  very  melodic.

Valfreya  remain true  to  the  folk  and  melodic  black/death  metal  mixture  of  previous  releases,  the  production  sounds  very  professional  for  being  a  self released  recording  while  the  lyrics  cover  Nordic  Paganism  themes.

https://www.youtube.com/watch?v=QX2M2deDyb8
Posted by OccultBlackMetal at 5:49 PM No comments:

1. Can you tell us a little bit about the band for those that have never heard of you before?
Valfreya is a viking metal band with folk/black metal influences that was created in 2009. The music is inspired from Nordic mythology and it brings the listeners into a fantastic tale.

2. How would you describe your musical sound?
Valfreya plays aggressive music with glorious riffs that is completed into a symphonic ensemble with the use of keyboards.
3. What are some of the lyrical topics and subjects the band explores with the music?
The lyrics tell the story from beginning to end on  the album path to eternity.

4. What is the meaning and inspiration behind the bands name?
Nordic mythology is the number one inspiration for the band. We have created a story inspired of their multiple worlds, creatures and gods.

As for our stage performance, we like to bring a lot of energy as well as a theatrical act into our show. We're always costumed and we wish to bring the public into the ambiance of the tale that is presented throughout our music.

6. Do you have any touring plans for the new release?
We have quite a few shows all over the province of Québec and we are planning a tour in the western provinces of Canada. We also wish to travel Europe but there are no dates confirmed for this possible project.
7. On a worldwide level how has the feedback been to your music by fans of pagan and folk metal?
Very positive! The fans of Pagan - Folk - Viking metal seem to find our sound refreshing. We have successfully created a musical sound that is new within a genre that is already very exploited. We also bring out a special touch with our theatrical act throughout shows.
8. What direction do you see your music heading into on future releases?
We already started the work on our next album. We are keeping the same Viking Metal inspiration but we will also bring out a new feel. I won't say more!
9. What are some bands or musical styles that have influenced your music and also what are you listening to nowadays?
All of the members of the band have their own influences, but when it comes to me I would say:
Wintersun: For the vocals and intensity of the songs.
Equilibrium: For the festive side.
Arkona: When it comes to the folk feel.
Dimmu Borgir: For the darker and more black metal influenced parts of the album.
Rhapsody: With Keyboards and symphonies.

10. How would you describe your views on Norse Paganism?
We're not really implicated with Norse paganism.
Our music is simply inspired by Nordic mythology.
11. Outside of music what are some of your interests?
It's hard to mention our interests outside of music.
We like to see shows when we're not playing them. I'd say it is most likely going around anything involving arts and creativity.

12. Any final words or thoughts before we wrap up this interview?
I would suggest everyone to keep themselves updated through our facebook / reverbnation or even twitter.
All of our shows are announced and we have some upcoming surprises!!

Posted by OccultBlackMetal at 10:09 AM No comments: 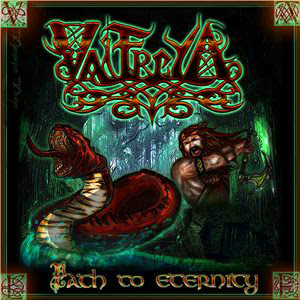 Vocals  range  from  clean  female  singing  to high  pitched  blackened  death  screams  and  growls,  spoken  word  parts  as  well  as  some  clean  singing  male  viking  metal  chanting,  while  the  lyrics  cover  Norse  Mythology,  as  for  the production  it has  a  very  strong,  powerful  and  heavy  sound  where  you  can  hear  all  of  the  musical  instruments  that  are  present  on  this  recording.

Posted by OccultBlackMetal at 10:49 AM No comments: