DOMINANZ – is a modern and hellishly powerful band playing atmospheric and somewhat industrialized metal.
The orchestra DOMINANZ is a successor of the project called Cult of Deception that I started to wrote songs for in 2006. After a couple of years with composing I joined forces with Frode Gaustad former drummer in the black metal band Thy Grief, and Jørn Tunsberg guitar player in the epic black metal band Hades Almighty, and formerly in the bands Immortal and Old Funeral.
Basically the band members come from the Black Metal scene, and this is obvious in the way of singing, but also in the style of music. But we have also added some atmospheric and Gothic stuff, along with various industrial elements here and there. The music is aggressive and groovy, and we try to create a very sick atmosphere!

2. How would you describe the musical sound of the new album?
What we have tried to achieve with As I Shine is to create a dark and dismal record, but at the same time be catchy. We hope it will get on the nerves and emotions to the listeners, but also those in the mood for a good party! In my opinion,Dominanz has a unified expression. It is a common thread between the music and lyrics. Everything reflects my dirty thoughts and we’ve tried to express that visually, something you can see in our music video "The End of All There Is"

My own lyrics are mostly inspired by true events about the oppression of people throughout history. I am partly inspired by my visits to Auschvitz, the KGB's headquarters where they tortured and killed innocent people. One of the texts are inspired by the Austrian case, where Joseph Fritzl had the lead role. I am also inspired by working as a social therapist in the psyciatrics. The lyric deals with everything from erotic depiction of oppression, slavery and ways to dominate fellow man. The main theme is on the bleak and destructive ... and living on the edge between life and death. While others are simply depictions of a Sado Masochistic Fuck!

4. What is the meaning and inspiration behind the bands name?
I think the question above covers it pretty well, don’t you think? Hehe

5. What are some of the best shows that the band has played so far and how would you describe your stage performance?
We have not done too many live performances yet, but the best is probably last summer at a festival in Lithuania. And that despite the fact that all of our music equipment and stage clothes never made it to Lithuania, they got stuck at Oslo airport! So after stressfull days trying to get our equipment sent to Lithuania without luck, the organizers of the festival managed to scrape together some equipment a couple of hours before the gig. And we did a very succesfull gig in front of about 2000 people, and got very good reviews afterwards
In my opinion,Dominanz has a unified expression. It is a common thread between the music and lyrics. As I said earlier, everything reflects my dirty thoughts and we’ve tried to express that visually.

6. Do you have any touring plans for the new release?
Our Promotor Rock’N’Growl is working on a little tour in Denmark. We are also working on getting together a little tour in Holland and Belgium. And hopefully some shows in Norway in connection with the release of the album. We’re hoping to do some festivals in 2012 as well.

7. I know that some of the band members have backgrounds in bands that are more black metal in style, what made you decide to go for more of an industrial approach with the new band?
The songs of As I shine, I began writing as far back as 2006. So I spent almost three years in this process. It's very various how the different songs came to life. Most of the songs were finished before Frode and Jørn joined the band. There were no intention of going towards a specific genre, Dominanz is going for a dark and gloomy expression, but still catchy regardless any genre
What we have tried to achieve with As I Shine is to create a dark and dismal record, but at the same time be catchy. We hope it will get on the nerves and emotions to the listeners, but also those in the mood for a good party

8. Are there any side projects besides this band or is this a full time line-up?
For Frode and myself this is a full time project, there is neither time or any desire to do anything else. But Jørn still has his band Hades Almighty, and he’s writing and working towards a new album with them.

9. I know that the band is heavily promoted by both Industrial Silence and Rock'N' Growl, how di you get in contact with these labels and promotion teams and how would you describe the support that they have given you so far?
We sent around some e-mails to different promotors, and there were some that responded positively. Amongst them we found Rock’N’Growl to be the ones we wanted to work together with. So far we’re very satisfied with the result.

10. On a worldwide level how has your music been recieved by atmospheric black metal and industrial fans?
That’s a question for them to answer. But the reviews so far from different Industrial magazines as well as more black metal magazines has been good, so I guess good is the answer.


11. What direction do you see the music heading into on future releases?
We try of course to always improve. We have already started working on the next album. It will be more metal, more extreme, but we will still take care of the dark and gloomy, and the catchy phrase of Dominanz!

12. What are some bands or musical styles that have influenced your music and also what are you listening to nowadays?
Unfortunately I am not good at discovering and listening to new music so there is much of the same bands I've listened to for years that, Katatonia, Dimmu Borgir, Samael, Deathstars, Sixteen Horsepower, Emperor, Bathory,Hades Almighty, Woven Hand, JohnnyCash, Rammstein, Depeche Mode among Others.

13. What role does Occultism, Satanism or Paganism play in the music?
There is no inspiration from neither, all of the bandmembers are atheists.

14. Outside of music, what are some of your interests?
I’m so lucky that I live at the base of a mountain, so I try to run up there a couple of times a week. Otherwise I allways appreciate a good party with friends!

15. Any final words or thoughts before we wrap up this interview?
There is an excessive amount of work behind this release, so I hope of course the audience will appreciate it and buy the album!

Posted by OccultBlackMetal at 12:24 AM No comments: 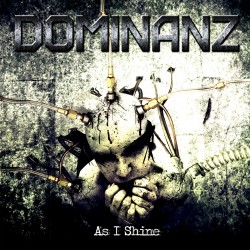 Dominanz are a band from Norway that mixes black metal with industrial and gothic music and this is a review of their 2011 album "As I Shine" which was released by Industrial Silence Records.

Drums range from slow, mid paced to fast drumming with some blast beats being thrown in at times, while the synths bring a very dark and industrial/gothic/atmospheric feel to the music,

Vocals range between high pitched black metal screams, industrial metal style shouts and growls mixed in with some clean singing male and female gothic vocals, while the lyrics cover dark and aggressive themes, as for the production it has a very powerful, heavy and professional sound and you can hear all of the musical instruments that are present on this recording.

In my opinion Dominanz are a very good black/gothic/industrial metal hybrid and if you are a fan of bands that mixes these styles together, you should check out this band. RECOMMENDED TRACKS INCLUDE "Agony And Domination" "Eternal Sin" "Last Day Of Your Life" and "The End Of All There Is". RECOMMENDED BUY.