LUÍS: Anifernyen is a melodic Black/Death metal band from northern Portugal. We are a group of five elements with some musical experience and history in the portuguese underground. In 2008 we released our first work. A 5 track EP, produced by Daniel Cardoso (Anathema) at Ultrasound Studios. After a hiatus of 7 years, we returned in 2017 with a new formation and recorded our debut album in 2018. One year later we are anxious for the release and to get back on the road.

2.In September you have your first full length coming out, musically how does it differ from the ep you had released in 2008?

LUÍS: A long time has passed between these two records. Augur is a more mature work in every way. We gave it a lot of thought structurally and in terms of concept. The renewed band structure allowed us to improve lyrically and rhythmically. As the guitars continued to work harmoniously together, Daniel brought a more careful approach to the lyrics and his vocals are brutally solid and very dynamic. Hugo is bad ass drummer and, together with Ricardo brought a new life to the rhythm section.

3.The band was broken up for 7 years, what was the cause of the split and also the decision to reform?

DANIEL: The band had not broken up. It really was a hiatus. There were quite a few line-up changes throughout the years and it was around 2013 that I replaced the former singer, Ricky. After that time we had some other line-up changes and we also had to change our rehearsal routines. Fortunately, it all ended up alright, since the core of the band has always remained strong with both Luís and Diogo. And after that much restructuring the band finally found a bit of stability and we were able to focus on our main goal which was to get our debut album out.

4.The lyrics cover apocalyptic and end times themes, can you tell us a little bit more about your interest in this topic?

DANIEL: I’m not a believer in any folklore, faith or creed, be it considered holy or profane. However, I believe that everything ends. And certain images about the end times that have been transmitted to all of us by the writs of certain religions have this curious appeal. When I was listening to our demos those were the images that our music brought to my mind, those were the places to where my imagination travelled, and somehow it felt fitting to write about these themes of destruction, desolation and death. They marry well with the sound of Anifernyen.

5.I know that the band's name means 'A Cold Hell' in contemporary English, how does this name fit on with the musical style you play?

DANIEL: I think the name Anifernyen is quite fitting for our musical style. Our music can be categorized in the black/death metal genres with some melodic elements to it. I can get all metaphorical and poetic about this and say that it is fast and harsh at times like the blazing flames of Hell, and sometimes it becomes slow and bleak like a wintery frost.But seriously, I guess that when Luís came up with the name for the band was because it was unusual and all quite different from the rest, or the band could have ended up has yet another band with a name that ends in “...ation” or yet another one that associates the adjective “Dark” to any other word. I don’t mean that is wrong. I’m just glad that we are different.

DANIEL: The cover art, as all the art in the booklet was created by the extraordinary Credo Quia Absurdum which deserve a big shout out for their excellent work that exceeded our expectations. We knew that when we contacted them for the job that we would get a superb end result, but what we got was beyond that. And it shows. We gave them the guidelines about the themes and the aesthetics of the album and they followed through. The cover art is but the tip of the iceberg. The figure in the center represents the herald of the end times, here to take us all, and if you flip through the CD booklet you'll find so much more amazing artwork.

LUÍS: The impressive thing about the artwork is that everything is connected with the lyrical content. We were very thorough with our briefing and passed on all the lyrics as well as a summary of the meanings for each song. Luckily I think we found in CQA a lot of common interests that made our communication somewhat facilitated. A lot of the concepts referred in the lyrics were well known to them. This way we managed to construct an imaginary that illustrates almost each song. The level of detail is very high and is interesting to find the similarities between the writings and the illustrations.

DANIEL: The band had a lot of amazing gigs when the EP “Pledge of Chaos” was released. But by that time I wasn’t in the band yet. For me, in particular, one of the best shows so far was when we played Vimaranes Metallum Festival in 2017. It happened just at the right time, when we felt that we were ready for a live performance. The venue was great, the bands that played with us were amazing, and we felt very comfortable, which led to a great performance. In every performance we try to stay true to what our music. Kind of a stoic presence in between songs, but aggressive and fierce when we perform. Our shows can grow into something more visually spectacular given the chance, but right now that’s not one of our main concerns. We want to sound good and we want the audience to understand our music. Everything else that may be an accessory for the stage performance will come later.

LUÍS: We're getting in contact with venues, promoters and festivals to establish a schedule for the end of the year and next year. We're also working with ESW Booking agency. We expect some results very soon. Next gig will be with Lucifer's Child(GR), Humanart(PT) and Akouphenom(ES) at Hard Club in the 14th of September.

9.The new album is going to be released on 'Ethereal Sound Works', can you tell us a little bit about this label?

DANIEL: Even though ESW is an independent label, they are very interested in the projects they sign. I worked with the label before, with my other band, and one thing is for sure, they are motivated in representing the bands in their roster in the best way possible, and we are sure it’s going to work in the same way with Anifernyen.

10.On a worldwide level how has the reaction been to your music by fans of melodic black and death metal?

LUÍS: In 2008, when we released "The Pledge of Chaos" we've got very good reviews from national press as well as international, but most of our contacts were made by standard mail and social networking was not as developed as is today. We hope to increase a lot the spectrum this time. The research was much wider and we have a label behind us. We are starting to get very nice reviews from across the world by now and we hope to get much more after the official release in September.

LUÍS: It's going to evolve for certain. Not really sure where yet. I feel that during the production of Augur a lot of growth was achieved in terms of sound production knowledge which will certainly help us in composition as well. There's also a will to try new techniques and perhaps try something new in terms of sound.. Who knows.

LUÍS: As individuals we have musical preferences that resemble and others that not. I think the common ground between us is mainly black, death and doom metal. Bands like Immortal, Funeral Mist, Behemoth, Mgla, Svartidaudi, Ascension, Deicide, Carcass, Paradise Lost, Shape of Despair, Paradise Lost, to name a few..

DANIEL: Nothing out of the ordinary, i guess. And once again, I speak for myself, of course. Reading, watching movies and TV shows, listening to music, playing videogames. We all have normal lives outside the band. We all have jobs and families and the band, even though we take it very seriously, is escapism from all the other stuff.

LUÍS: We would like to thank everyone who spend some time reading this interview. Is very difficult to cultivate any kind of interest in people nowadays. If you are reading this please pass by our Facebook account and give us a shout. We are simple guys and gladly exchange some words with anyone. Tell us what you liked and what you did not for that matter.
The end is nigh!


https://anifernyen.bandcamp.com/
Posted by OccultBlackMetal at 12:10 PM No comments: 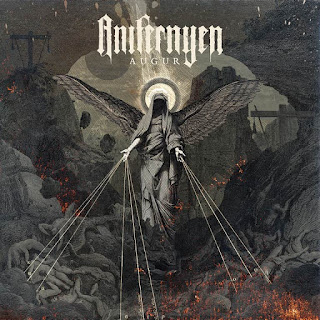 Anifernyen  plays  a  musical  style  that  takes  the  melodic  styles  of  black  and  death  metal  and  mixes  them  together  to  create  a  sound  of  their  own.  The  production  sounds  very  professional  while  the  lyrics  cover  apocalyptic  and  end  times  themes.