Tohmar- We're a Norse-Gael symphonic metal two piece from Pennsylvania. As proud Irish Americans we promote our heritage and culture through our music.

2.You have an album coming out in September, how would you describe the musical sound that is presented on the recording?

Tohmar- I would prefer that the listener interpret the lyrical/thematic narrative as they choose.

4.What is the meaning and inspiration behind the name 'Hate Moon'?

Tohmar- I also prefer this be an abstraction that the listener can interpret as they wish.

5.Currently there are only 2 members in the band, are you open to expanding your line up or do you chose to remain a duo?

Tuathail- Hate Moon will remain a duo. Tohmar and I have a certain vision for this band where we don’t want outside influence to disturb it.

6.The album is coming out on 'Folkvangr Records' are you happy with the support that they have given you so far?

Tuathail- Yes, it has been quite a privilege and honor to be with Folkvangr.

Tohmar- Until this album we have not released anything publicly/officially.
Tuathail- We did pass along demos to friends and they were always well received.  This is why we felt an album was due.

8.Where do you see the band heading into musically during the future?

Tohmar- Black/death metal, classical, goth, and music from video games.  Both in the the present and past.
Tuathail- For me black metal, experimental electronic and industrial music.


10.Does paganism play any role in your music?

Posted by OccultBlackMetal at 10:32 PM No comments: 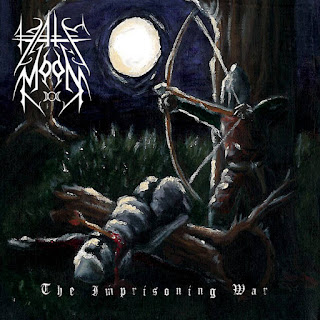 Dungeon  style  synths  start  off  the  album  and  after  the  intro  classical  guitars  are  added  onto  the  recording  along  with  some  symphonic  elements  that  also  mix  in  with  the  heavier  sections  of  the  songs  which  also  use  a  great  amount  of  melody  while  you  can  also  hear  all  of  the  musical  instruments  that  are  present  on  the  recording.

Hate Moon  plays  a  style  of  black  metal  that  is  very  symphonic  and  epic  sounding,  the  production  sounds  very  professional  while  the  lyrics  cover  the  ancient  Celtic  World  and  historical  fantasy  themes.

Posted by OccultBlackMetal at 6:50 PM No comments: