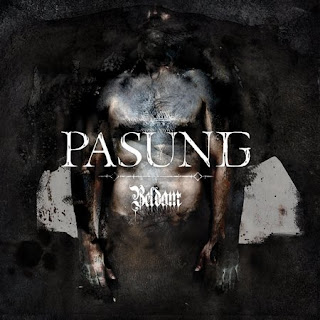 Beldam  creates  another  recording  that  remains  true  their  blackened  mixture  of  sludge  and  doom  metal  from  their  previous release,  the  production  sounds  very  professional  while  the  lyrics  cover  death,  despair  and  decadence  themes.

https://www.facebook.com/BeldamOfficial
Posted by OccultBlackMetal at 3:36 PM No comments:

We're a group of committed musicians who take our craft very seriously. Even though we all have busy lives outside of the band, we don't see this as a fly-by-night thing or a hobby to screw around with. We believe 100% in this project, in making crushing music and playing brutal shows, and as far as we're concerned, the sky is the limit.

2.You have your first full length coming out in June, how would you describe the musical sound that is presented on the recording and also how does it differ from the demo you had released in 2015?

Most of the songs from the demo are all on the full-length, but the album's production is a lot cleaner and the song structures have been tightened up a bit. The earliest material we created together was much more full-on doom: painfully slow, lots of minor scales and tritones and pummeling primitive drumming. Later we started incorporating more sludge, with a greater number of mid-tempo and fast bits, pentatonic stuff, and more hardcore influence overall. If you listen to the demo and then to the album you can sort of hear that progression.

Each song on the album tells a story dealing with death in some fashion. The stories are told in the first person, from the point of view of the killers, the killed, or somebody who has lost a loved one. Using an economy of words, the lyrics delve into the psychology of grief, madness and despair. It's pretty dark stuff.

4.What is the meaning and inspiration behind the name 'Beldam'?

The inspiration of the band name came after much research.  We ran through a number of options but they all sounded derivative.  We really like the idea of having witch in the band name but every permutation imaginable has been used so I started doing research on the origins of the actual word witch.  In my reading I found the word Beldame and thought it had a great unique sound to it.  So, I pitched it to the band and we all dug it so it stuck.  We ended up dropping the “e” at the end and hence we are Beldam

We played a metal showcase in Charlottesville, VA at Champion Brewing recently with Ramming Speed and Ruby the Hatchet.  It was magical and crowd response was extremely positive.  We also were able to open for Witch Mountain at Strange Matter in Richmond, VA a while back, which was a great experience because we have been big fans of theirs for a long time.

Our stage performance is extremely intense.  We leave nothing on the table by the end of our set.  We do everything to make it a complete performance particularly sonically.  Doom requires a lot of volume to fill up the spaces and we do everything possible to fill the room with sound.  We want our live shows to be as cathartic for the audience as it is for us.

6. Do you have any touring or show plans once the album is released?

We are putting together a string of shows this summer from June to August to support the album. Not everything is solidified yet and new dates are getting added all the time, so keep checking our social media channels for updates!

7. Your album is going to be released by Horror Pain Gore Death Productions, are you happy with the support that they have given you so far?

Mike Juliano and HPGD Productions are a dream come true for Beldam.  He only wants success for the band and has been completely supportive of us.  Everything has been completely transparent and above-board.  It feels like a true team with someone who fully invests himself in the bands on his roster.  Beldam is extremely excited about our future with HPGD.

8. On a worldwide level how has the feedback been to your music by fans of black, sludge, and doom metal?

Beldam has been receiving some very positive feedback.  Our original demo, which was released digitally by Hota Rex in early 2016, had some of its songs featured on compilations and internet radio in the US, UK and Italy.  We also received some great reviews, particularly from The Stoner Sound.

I doubt the basic sludge/doom backbone of our music will change, but I wouldn't be surprised if we started throwing more ingredients into the cauldron. We have some upcoming material that's more in a stoner direction with super-heavy blues riffs, and we've also got some faster stuff. But fear not! Whatever happens we'll always keep it low, slow and dirty for you.

Some huge influences for us have been EYEHATEGOD, Graves at Sea, High on Fire, The Melvins, Black Sabbath, Weedeater, Primitive Man and there are so many more I could list.  Lately, I have been listening to a wide range of stuff.  In the last few weeks, I’ve had Dinosaur Jr., Brujeria, The Beatles, Jimi Hendrix, Husker Du and John Coltrane on heavy rotation in my truck.

Outside of music, I am a craft beer enthusiast. I try to find the local breweries in every city we hit for a beer. I hope one day we will be able to do a collaboration beer with a brewery. One of the guys in the band is a huge horror enthusiast, another is a gaming nut . . . we pretty much have all your geek bases covered.

Thanks so much for taking an interest in our music and reaching out to us. We appreciate the time.

https://www.facebook.com/BeldamOfficial
Posted by OccultBlackMetal at 3:04 PM No comments: 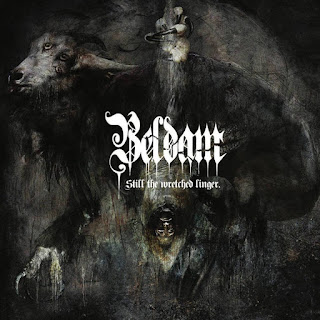 Beldam  plays  a  musical  style  that  is  mostly  rooted  in  sludge  and  doom metal  while  also  having  more  of  a  black  metal  vocal  approach  and  a  touch  of  death  metal,  the  production  sounds  very  professional  while  the  lyrics  cover  death,  despair,  and  decadence  themes.