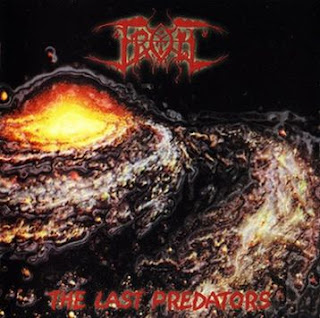 Troll are a band from Norway that consists of many well known members of the Norwegian black metal, which started out as an ambient/industrial style of symphonic black metal but went for a more straight forward black/thrash sound with this release while retaining some industrial elements and this is a review of their 2000 album "The Last Predators" which was released by Head Not Found Records.

Drums are mostly mid paced to fast with a lot of brutal blast beats, while the bass  playing has a very dark tone with riffs that follow the riffing that is coming out of the guitars and at times they sound really powerful, as for the loops and synths when they are utilized they bring an ambient/industrial as well as a symphonic feel to the music.

Rhythm guitars are mostly mid paced to fast Norwegian style black metal riffs that also take a lot of influences from thrash, while the lead guitars have a classic metal/rock feel to the guitar solos.

Vocals are a mixture of high pitched black metal screams and industrial style vocals and the occasional death metal growl, while the lyrics cover hateful style themes with a dose of anti Christianity with the songs being written in a mixture of Norwegian and English that also have somewhat of a sci-fi feel, as for the production it has a very powerful sound that gives all of the musical instruments a brutal sound.

In my opinion this was a very good album from Troll and if you are a fan of classic Norwegian black metal, you should check this band out if you have not yet already done that. RECOMMENDED TRACKS INCLUDE "Fall Of The Marbled Galaxy" "Mending The Instincts" "Eyes As In I" and "The Last Predators". RECOMMENDED BUY.

Posted by OccultBlackMetal at 11:54 AM No comments: