Marc: We all lead separate lives for the most part. This is mostly due to living so far from each other. While this hinders any hopes of live performances at the moment, we still have fun trading riffs and continuing to create music together. The internet and digital workstations have been great to us in that regard.

Rob: We are starting to track some demos for the follow up album. As a band that likely won’t be doing any touring, we want to keep the ball rolling somehow. We talked about it and I will be 50 in eight years, we’d like to have four albums out by then. So, one every 2 ½ to 3 years for the next decade.

2.In September you released your first full length, can you tell us a little bit more about the musical style that you went for on the recording?

Rob: Well, what we released in September was more a demo than anything, the fully mixed and mastered album officially released in May 2020. We weren’t shooting for any particular style; we just write what we think sounds good and build upon that.

Marc: I think we initially were trying to just redo most of the older songs as a fun project that helped keep us connected as friends. We had older demo recordings from around 1999 and wanted to update them to reflect what we have learned as musicians over the last couple decades. Once those were completed, we continued to write in the same vein musically because that just seems to be how things fall into place for the three of us. In a nutshell, I don't think we're ever going for a particular sound exactly. I think we just play what comes to us and it sounds how it does.

Marc: Towards to end of our initial run there was some turmoil brewing within the group. We had other guys playing with us at the time and things just didn't seem to work out overall. During the past couple decades, we were all involved in music somehow and I think it was just decided that we should try to get those original songs recorded for our own personal enjoyment. Once we started that process it just kind of took off for us again.

Curtis: Well the disbanding was brought on by many things. A big portion was due to not having support in the local scene (which was thriving at the time). There was national publicity in the Little Rock sludge scene which I was a part of, but somehow Ba'alzamon was not. On any given weekend, you would see some amazing extreme band come through with 2 or 3 stoner bands made up of the same handful of guys, and that was beyond frustrating. All that, along with previous members causing turmoil within the band, just killed it for all of us for a while.

4.What are some of the lyrical topics and subjects the band has explored so far with the music?

Marc: The original songs from the 1998-2001 era were kind of all over the place. There was no one solid topic that we used. We had a protest song (There Was No Blood), a song about cults (Heathens of the Blackest Fold), and even a song about celestial rebirth (A Vow of Celestial Fealty). We were younger then and were exploring many topics based on the state of the world then and also our influences at the time.

Curtis: Subjects tend to gravitate toward Cults and cult type activity, astral projection, breaking out of dark places in life and destroying what oppresses you. One song is a dedication for my love of nature and the beauty of the Ozarks.

5.I know that the band’s name comes from Robert Jordan's "Wheel of Time” series, can you tell us a little bit more about your interest in these writings and also are there any other fantasy authors that have had an influence on the music?

Marc: Unfortunately, I'm not much of a fantasy reader. That would be Rob who read those books and suggested the name. I'm personally more of a Sword and Sandals guy, while The Wheel of Time is Sword and Sorcery type stuff.

Curtis: Knights of Soth is about a character in the Dragonlance / Ravenloft series.

Marc: We wanted to capture some of the area where Ba'alzamon first got together as a band and started writing while also keeping things a little spooky.

Curtis: I took that while at sunset on a swampy part of Lake Conway.

Rob: Probably a show we did at a place called Vino's. It is a staple club in the scene (has been for decades), and it was kind of a rite of passage to play there. Plus, I can still remember the after-party pretty well, and that was, I think, where we were peaking with that particular line-up.

Marc: We were a wild bunch for sure. Lots of DIY theatrics. We would use fake blood, homemade stage lighting and whatever else we could think of to try to give the crowd the best show possible. My personal favorite show that we ever played was at Vino's in Little Rock. We had all seen many bands that we loved there so sharing that same stage finally was a great experience. Other shows that are memorable were at The Parlor Tattoos in Little Rock and The Electric Moo in Russellville.

Marc: I don't believe we've received any interest at this point. It may be a bit soon for that considering the album just got released. I think if the right offer were to come around, we may be interested.

9.On a worldwide level how has the reaction been to your music by fans of black and death metal?

Marc: People into metal seem to like it so far and we've received some good reviews. I'm not sure how many international listeners have heard us at this point, however.

Marc: I think we'll keep writing music and working on the next release. With modern technology and faster ways of trading ideas, we could probably do this for a long time to come.

Rob: When we last spoke on it, we talked about doing 3 more albums before evaluating if it was worth continuing. For now, we are starting to lay some tracks for the next album.

Rob: A lot of early second wave black metal and early symphonic black metal. Those first few Emperor, Cradle of Filth and Dimmu Borgir albums, anything produced by Peter Tägtgren, some early melodic death metal. That is what influences me. I listen to a wide variety of things but lately have enjoyed the newest mgła album, Deathspell Omega, Dark Funeral’s Angelus Exuro pro Eternus.

Marc: I think we had a lot of black metal influence early on. I've personally never been much of a true death metal fan and was always the guy trying to get Luca Turilli into the CD rotation at parties. Cradle of Filth was a favorite especially during the Dusk and Her Embrace/Cruelty and the Beast era. Dimmu Borgir's Spiritual Black Dimensions was another one I think we all listened to often. There was also Borknagar, Manowar, Acid Bath, Rwake, Emperor, etc. Nowadays I'm listening to mostly bands like Nargaroth, Rotting Christ, Lustre, None, and Insomnium.


12.What are some of your non-musical interests?

Marc: I'm actually an avid trading card collector. I mainly stick with baseball, football and Star Wars cards. I have a good time buying, selling and trading with others like me who just enjoy the hobby.

Curtis: Camping, kayaking, youth football really all the youth sports we are involved in.

Rob: I am currently working on a PhD in Communication and Information Studies. I am in the dissertation phase, with two kids aged seven and one, as well as teaching undergraduate courses, so all that eats up most of my time. Any free time I usually dedicate to music.

Marc: Just that we appreciate every single person who has given us a listen and hope to continue making music. Thank you to everyone who has listened and reviewed us as well.
involved in, 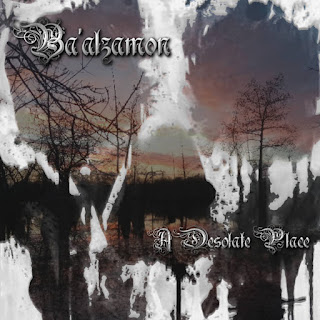 Posted by OccultBlackMetal at 2:02 AM No comments: