1.For those that have never heard of you before, can you tell us a little bit about the band?
Well,its all started by the end 2012 i started looking for musicians for my new band, been working on some material for a while, and was ready to get in in rehearsal room
It was not easy to get musicians for such stuff, i had two self made demos with a drummer, a close friend of mine helped me with that, anyway summer 2013 i met Alexandra and Mike, so we gathered to make it all happen, after a while we got 5 tracks to be recorded, and we started to look for a studio, this is how Azathoth Circle started

2.So far you have released 2 ep's, how would you describe the musical sound that is presented on both of the recordings and also how do they differ from each other?
The first EP was just a first our try to look on what we have done working together, mixing ideas, riffs, vocals, arrangements and perfect drumming by a friend of ours Erland
it was representing our mood at that time, passion and sadness in one work, second one is more powerfull work, we been on our way of mixing what we all love, from alternative metal, black metal, stoner, progressive, doom, and the mix of all of it, you can hear on both EPs we all listen to different music, but we gathered just to get it together in a mix of what you hear

3.What are some of the lyrical topics and subjects the band explores with the music?
its all matter of our lives, fights with ourselves, what we feel, what`s our fears, what it covers in us

4.What is the meaning and inspiration behind the name 'Azathoth Circle'?
Life Circles, your dark sides, your bright sides, you can be the god of your dark side, or bright, you choose, it`s your circle, its a matter of what your are going to join
Are you in a Circle?)


5.What are some of the best shows that the band has played so far and also how would you describe your stage performance?
We made our first two shows alredy, both in local clubs, biggest and most influential stages in our city, we all been playing before in different bands and have a great experience of being on stage, but for the firs time Azathoth Circle appears as one part, as a band itself, nice performances, nice audience, we know what to do, how to make stage performances even better

6.Do you have any touring or show plans for the future?
As any band we are willing to make awesome tours, big shows, getting more and more recognizable

7.Does Occultism play any role in the music?
not any, we are dark persons, but not as much )

8.On a worldwide level how has the feedback been to your music by fans of metal?

we started promoting ourselves on biggest musical social networks (reverbnation,bandcamp, lastfm....) the feedback on our first EP was fantastic, so its a great start for a local
band to get a wordwide respect, by working hard on songs and live performances

9.When can we expect a full length album and also where do you see the band heading into musically during the future?
We want to record our 3d EP and make it also digital, maybe limited edition CD, album? well there are no reasons to make an albums our days for no major label bands i guess
itunes, amazon, shows how ep`s , singles are sells, so, album, we will do it, after third EP i guess it will be the right time to make it

10.What are some of the bands or musical styles that have had an influence on your music and also what are you listening to nowadays?
we all listening to different stuff, wide range of musical styles and bands that`s why are not sure, what exactly we are playing ))))

11.What are some of your non musical interests?
we all open minded and looking for some cool stuff, for something new, something interesting )) watching discovery channel (lol)

12.Before we wrap up this interview, do you have any final words or thoughts?
Thank you for you time, for checking our stuff, give it a like on facebook, oh yes, we have a facebook page, you can find latest news there, also don`t forget to share
and support local scene, all bands needs your support, cheers !!

Posted by OccultBlackMetal at 3:43 PM No comments: 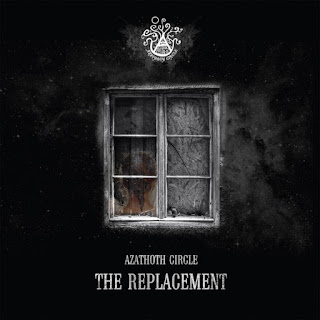 Azathoth  Circle  brings  in  a  variety  of  many  different  style  ranging  from  progressive  and  post  metal  and  adding  it  in  with  the  heaviness  of  stoner,  doom  and  black  metal  along  with  a  touch  of  mainstream  rock  to  create  their  own  style  of  dark  metal,  the  production  sounds  very  professional  while  the lyrics  cover  dark  and  occult  themes.

Posted by OccultBlackMetal at 2:58 PM No comments: