1.For those that have never heard of you before, can you tell us a little bit about the band?
1)   Sure ! first let me thank you for the opportunity to describe the band and this first album which, we hope, will appreciated by metalheads of all kinds.
Cor Serpentii is a black/death project that is just about to release its first album, 10 tracks of rather agressive and dark sound altogether. The project got created upon the ashes of Insain, together with the great contribution of Frederic Gervais, the founder, bassist and singer of the French avantgarde band Orakle. I think this mix of different profiles and styles was exactly what Cor Serpentii needed : to intend taking the best from each extreme style and propose our own blend, materialized in this fully blown album as a starter.

2.Recently you have released your first full length can you tell us a little bit more about the musical style that you went for on this recording?

2)   As you can surely guess, the album has a tendency to step onto Black metal and Death metal paths. It is quite interesting to hear about the feedbacks from listeners as most of them describe the album as rather original, with even some Heavy Metal sounds and atmospheres sometimes. I think this comes from the creation process in which i create the guitar tracks, which are then enriched by Bono and Sangli, and finally magnified by Fred. We all have different influences and all ideas are welcome, the only sacred way being turbulent, dark sound.

3.The band formed out of the ashes of 'Insain', what was the decision behind the split and forming a new band?
3)   Insain members decided to part ways due to internal issues that i will not develop here. 3 former members decided to work together on a brand new project that is Cor Serpentii. What came as a proposal from me as an experience trial soon became a solid project. This is how it started, with a strong willingness to create and explore new sounds and atmospheres, taking advantage of the fact that each members have great ideas to tackle. The project took a whole new level after we got in touch with Frederic and Studio Henosis.

4.What are some of the lyrical topics and subjects the band explores on the album?
4) A good part of the lyrics were inspired by Bergen Grey’s first book, « Frénésie picturale » with a painter slowing declining and getting invaded by loops of « tentacular » insanity. « Ubik » was obviously inspired by the Book from K Dick. Overall, i would say that science-fiction, human decadence and twisted atmospheres form a good basis for our lyrics. We will most probably continue getting inspiration from literature moving forward.

5.What is the meaning and inspiration behind the name 'Cor Serpentii'?
5) Cor Serpentii is the name of a star. The idea of an entity yet to be explored attracted us. The image of the serpent often viewed as sitting at the origins of mankind resonated pretty well with the title of the first album as well.

6.Can you tell us a little bit more about the artwork that is presented on the album cover?
6) This artwork was created by 3mmi Design (Pierre-Alain Durand). We got amazed by the first draft, that we slowly helped to shape up until the final result was here. The contrast between a static body and the stellar immensity was an interesting outcome for us. This turns out to be a great support for our music.

7.What are some of the best shows that the band has played so far and also how would you describe your stage performance?
7) Cor Serpentii will release its first album at the end of october 2018. It will remain a studio project with other albums to come as we for sure enjoyed the experience of Phenomankind, but there are no plans for gigs at the moment.

8.Do you have any touring or show plans for the new album?
8) Cor Serpentii has no plans for gigs at the moment.

9.Currently you are unsigned, are you looking for a label or have received any interest?
9) Phenomankind has been released as a self production. I am very happy with the process and the amazing work that Studio Henosis was able to do on this album. We have been looking for a label, but it seems that a 10 tracks album as a first release is not a risk that everybody wants to take. All we want now is focusing on launching this album properly. The rest does not really matter.

10.On a worldwide level how has the reaction been to your music by fans of black and death metal?
10) We will be able to tell when the album will have been released officially but i can tell you that the journalists feedbacks are all very positive !

11.Where do you see the band heading into musically during the future?
11) Cor Serpentii will most probably remain a dark and agressive metal project. We will include other influences in upcoming tracks, always trying to put atmospheres and harmonies forward. This recipe we have achieved with Phenomankind is a good call for further exploration in the future.

12.What are some of the bands or musical styles that have had an influence on the music of 'Cor Serpentii'?
12) There are so many bands that have fostered our sound. Talking about the guitar creation, i can say Emperor, Zyklon, Morbid Angel, Arkaik, Unholy Matrimony, Blut Aus Nord, Deathspell Omega and more. But i also like to cultivate atmospheres the way totally different bands do, with the likes of Skinny Puppy, Dead Can Dance, Ulver and so on. I think all members of the band have different influences. What really counts is a catchy and original outcome.

13.Before we wrap up this interview, do you have any final words or thoughts?
13) Thanks for reading this interview. Go and listen to « Phenomankind », our first album, and give us feedbacks !

Posted by OccultBlackMetal at 8:26 PM No comments: 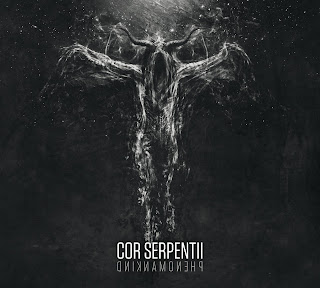 Cor  Serpenti  plays  a  musical  style  that  takes  the  technical  and  melodic  styles  of  black  and death  metal  and  mixes  them  together  with  a  touch  of  power  metal  to  create  a  sound  of  their  own,  the  production  sounds  very  professional  for  being  a  self  released  recording  while  the  lyrics  cover  dark,  scientific  and  philosophical  themes.


https://youtu.be/k1RYoW_U9sg
Posted by OccultBlackMetal at 9:02 PM No comments: