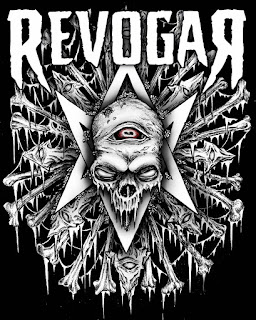 On  this  ep  Revogar  remains  remains  true  to  the  melodic  mixture  of  black  and  death  metal  from t heir  previous  releases.  The  production  sounds  very  professional  for  being  a  self  released  recording  while  the  lyrics  cover  Anti  Christianity  and  Death  themes.

https://www.youtube.com/watch?v=A-0B0vt6EBY
Posted by OccultBlackMetal at 11:06 PM No comments: 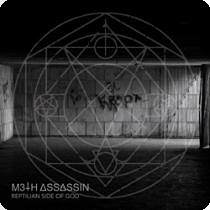 Electro-industrial  sound,  programmed  beats  and  synths  start  off  the  album  along  with  some  tortured  voices  also  being  utilized  briefly  which  also  gives  the  music  more  of  a  horror  movie  atmosphere. High  pitched  black  metal  screams  are  also  a  very  huge  part  of  the  recording  and  the  songs  also  add  in  elements  of  house  music.

The  songs  also  mix  in  a  great  amount  of  pulsating  basses  while the  music  captures  the  atmosphere  and  darkness  of  an  occult  black  metal  album  without  adding  in  heavy  guitar  riffs.  When  spoken  word  parts  are  utilized  they  also  give  the  music  more  of  a  ritualistic  feeling  and  as  the  album  progresses  elements  of  witchhouse    are  also  added  onto  the  recording,  one  of  the  later  tracks  is  also  an  instrumental.

Meth  Assassin  plays  a  musical  style  that  takes  black  metal,  industrial,  horrorcore  and  witchhouse  and  mixes  them  together  to  create  a  sound  of  their  own.  The  production  sounds  very  dark  while  the  lyrics  cover  Satanism,  Left  Hand  Path,  Occultism  and  Astral  Projection  themes. 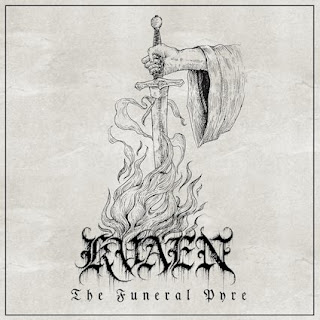 A  very  heavy  and  melodic  Swedish  influenced  sound  starts  off  the  album while  the  faster  sections  of  the  songs  also  add  in  a  decent  amount  of  tremolo  picking  and  blast  beats. Vocals  are  mostly  grim  sounding  black  metal  screams  as  well  as  the music  also  mixing  in  a  great  amount  of  speed  and  thrash  metal  elements. 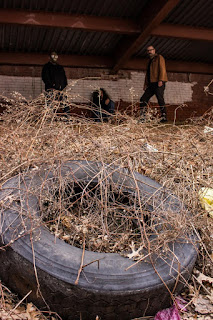 2.In July you also have a new album coming out, musically how does it differ from the stuff you have released in the past?

Our sound is always evolving. We sound much different from our first album "Da, Tovarish" and I think that's for the best. We've been providing remixes for other artists and that has lead to us having a bit more of an industrial influence. We've also been incorporating more melody and ambient sound to compliment the harsh drones.

3.This is also your first album since 2015, can you tell us a little bit more about what has been going on during that time span?

We usually go in a bit of hibernation between albums. We still play live locally, but we let the music rest so to speak. Everyday life tends to get in the way and we also work on other musical projects, so time occasionally slips away. When we do get together to write and record, it comes in large creative bursts and then we revisit later with clear minds to see if we should continue or start anew.

4.Your lyrics deal a lot with Soviet era Communism, can you tell us a little bit more about your interest in this topic and what led you to be interested in that era?

A lot of extreme bands (black metal, noise etc) either flirt with or outright embrace fascist imagery and ideology. We oppose all that and created Tovarish in direct response. Fascism is on the rise around the world and people must look for a way to combat and defeat it. There are lessons to be learned from Soviet-era Communism, both good and bad and we must look to the past in order to help save the future.

5.In modern day society a lot of people think communism is making a huge come back with all the whole war between socialism and the lat right, what are your thoughts on this?

I think it's encouraging that people are becoming more socially and politically aware and active to fight against those that destroy us simply for existing. People are not just rolling over to the tiki torch-carrying hatemongers that proclaim racial and gender superiority. There is a whole new generation of people moving further to the left because they see that we must work together to become better. A rising tide lifts all ships, many hands make light work, that sort of mentality.

6.What is the meaning and inspiration behind the name 'Tovarsh'?

Tovarish means "Comrade". We chose that name because it encapsulates who we are, what we stand for, and how we work together as a band. We truly do work together in all aspects of the band, whether it's writing, recording, booking shows, and even merch design.

The artwork was created by the amazing Stephen Wilson, who has also down artwork for Crowhurst, False, and Vile Creature.  We did not really put any restrictions or give any parameters. We sent him the album and just let him create something that is incredible to look at.

We've been lucky enough to play with some amazing bands. Kayo Dot, SubRosa, Psalm Zero, Endon, Batillus, Kowloon Walled City. All of those were great experiences. Our live performance typically includes video projected behind us. Past videos  have included riot footage, Soviet propaganda cartoons, time-lapsed nature video. It gives the audience something to focus on while we play.

9.Do you have any touring or show plans once the new album is released?

Not really. We don't tour and now only play shows if we're asked. In the beginning, we would play just about any show offered to us or would book our own. It led to many mixed bills in terms of genre and talent, which had less than desirable results.

10.On a worldwide level how has the reaction been to your recordings by fans of extreme metal and underground music?

Mixed I suppose. Your average metal fan probably wouldn't like us. No riffs, no mosh, no fun. The people that "get it" though really do understand and appreciate what we're doing. It's not easily listenable or digestible music, but there is something there and it's always encouraging when fans enjoy what we're doing.

Without putting us in a box, I would say more ambient and melodic sounds. We're really proud of what we have accomplished with If The War Comes Tomorrow and would probably continue on that track.

It depends on the day and the mood, but recently we've been drawn to sludge, doom, drone, and soundscapes.

Our music is available at tovarish.bandcamp.com and argonautarecords.com. Thanks so much for taking the time to ask us questions.
Posted by OccultBlackMetal at 12:22 AM No comments: 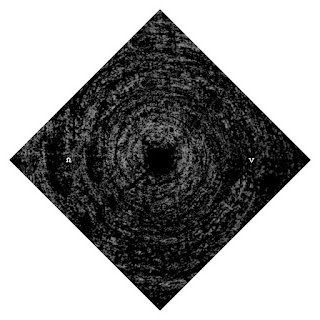 At  times  the  music  also  has  its  its  progressive  moments  as  well  as  mixing  in  elements  of  jazz.  One  track  is  an  instrumental  and  also  introduces  clean  playing  onto  the  recording  along  with  a  couple  of  the  songs  also  being  very  long  and  epic  in  length,  spoken  word  parts  are  also  added  onto  the  closing  track.  The  production  sounds  very  professional  while t he  lyrics  cover  Occultism,  Kaballah  and  Darkness  themes.

https://wolvesofhades.bandcamp.com/album/v
Posted by OccultBlackMetal at 11:58 PM No comments: 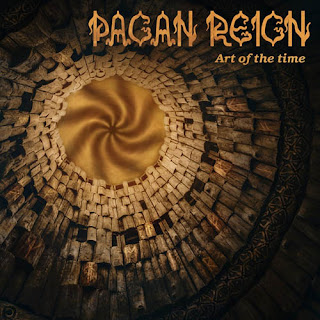 Classical  guitars  can  also  be  heard  in  some  parts  of  the  recording  along  with  the  music  also  having  its  symphonic  moments  as  well  as  a  great  portion  of  the  tracks  are  very  long  and  epic  in  length,  some  tracks  also  add  in  death  metal  growls  and  tremolo  picking  can  also  be  heard in  the  faster  riffing  The  production  sounds  very  professional  while  the  lyrics  cover  Slavic  and  Nordic  Paganism  themes. 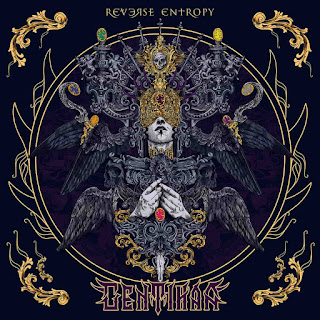 A  very  dark  sounding  intro  starts  off  the  album  which  also  introduces  melodic  guitar  leads  and  heavy  riffing  onto  the  recording.  The  riffs  also  add  in  a  great  amount  of  melody  while  the  clean  vocals  when  they  are  utilized  bring  elements  of  power  metal  onto  the  recording  as  well  as  the  vocals  also  utilizing  a  great  amount of  black  emtal  screams  and  death  metal  growls.

Posted by OccultBlackMetal at 9:17 PM No comments: 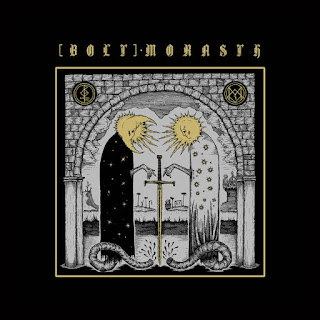 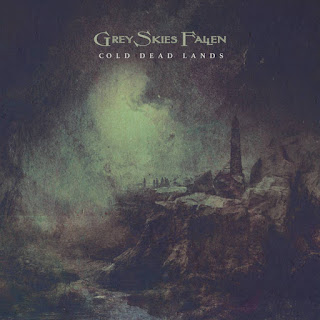 On  this  recording  Grey  Skies  Fallen  goes  for  more  of  an  epic  style  of  doom  metal  while  still  mixing  in  some  elements  of  progressive,  melodic  black  and  death  metal.  The  production  sounds  very  professional  for  being  a  self  released  recording  while  the  lyrics  cover  despair  and  bleakness  themes.


Posted by OccultBlackMetal at 3:20 PM No comments: