1.For those that have never heard of you before, can you tell us a little bit about the band?
Twilightfall as a group first appeared in 2010. However, the history of the musical project Twilightfall as one author-Wortherax -genus before. Nokturnal Mortum after I participated in the recording of albums many famous Ukrainian groups as a session guitarist, was engaged in an arrangement, studio work on mixing and mastering. For all these years I never left the idea to record your own album. In my home studio, I still did it. I showed his work familiar to musicians, and they are advised to embody the idea of ​​the project to a live band. And manifested Twilightfall.

2.You have a new album coming out in August, can you tell us a little bit more about the musical direction of the new recording and also how does it differ from the stuff you played with your past band?
The new album is the first album Twilightfall, this kind of experiment with different areas of the metal. However, uniquely characterize the style is impossible. The musical and textual material was coined as a whole, all the ideas were, as they say, from the depths of the soul. In fact it is Melodic Death Thrash Doom Sympho Metall. This is unlike the music Nokturnal Mortum 90s.

3.Can you update us more on what was going on in between the years you left Nokturnal Mortem and what made you decide to form another band?
As I said earlier, after I left NM, had a lot of work involved in the arrangements, records, participation in various projects, such as the creation of musicals in the rock processing. This could not impose its imprint on the musical ideas in my work. I always maintained a good relationship with NM and other famous musicians, allowing the works of many well-known groups. That, I think, first of all influenced by my desire to realize their ideas and create Twilightfall.

4.What are some of the lyrical topics and subjects you explore with your music?
I think, in any direction, there are elements of music lyrics. This reflects the mood of the author and artists. In this album, there's a lot of fragments that transmit lyrical mood. I, as a musician, was formed through the blues and hard rock, and in these areas lyricism sound particularly stressed. Doom-metal, too lyrical, and this style is reflected in our work.

5.Can you tell us a little bit more about the name 'Twilightfall' and also is it related to the Nokturnal Mortem album of the same name?
Indeed, the name of the group in some way connected with the album NM Twilightfall. I love this album, I was involved in its creation and in part I can say that the title of my project is the memory of working with NM.

6.have you been able to do any live shows with the newer band or are  there any plans for any live shows in the future?
Many times we have participated in various festivals with the participation of Ukrainian groups. This is mainly on the territory of Ukraine. Last charity concert was held in Kharkov 13.07 in 2014 to support the soldiers, liberating our country from invaders. We are proud to have contributed to the struggle for the independence of Ukraine. In the future we hope to carry on touring Europe.

7.The new album will be coming out on Svarga Music, how did you get in contact with this label?
We are familiar with Svarga long time, this label has released many albums of artists, among them my friends Munruthel (ex Nokturnal Mortum) and Khors. Svarga professional approach to all matters relating to the production of discs, advertising and information promoting Ukrainian metal bands.

8.On a worldwide level how has the reaction been to your music by extreme metal fans that have heard the band so far?
Only positive reviews. This is good. Music publications, students talk about some of the revolution in style. Everyone likes the presence in our album and traditions Melodic Death Metal, Doom, Thrash, Heavy, Progressive. Estesstvenno add here the roots of Blues and Hard Rock. I believe that music should not be one-sided, monotone. It tires the audience, making the overall picture of the material is not interesting.

9.Where do you see the band heading into musically during the future?
At the moment we are working on a new album. It will be a little different, more agile and emotional stuff. However, in many ways it is often combined with the previous one. Preparing to publish information site group planned to record a clip. All this, I hope in the near future.

10.What are some of the bands or musical styles that have been an influence on the band and also what are you listening to nowadays?
Now you can endlessly talk about the bands and styles that have influenced the group. Each participant Twilightfall has extensive experience in musical performance, everyone has their favourite bands. I can name In Flames, Arch Enemy, Dissection, At The Gates, Children Of Bodom, Dark Tranquillity, Redemption, and many others. I think many will agree with me that these commands take a worthy place in metal music.

11.What are some of your non musical interests?
I love to fish. This is a package that allows a break from the worries, the water has to be creative, calms the nerves. Still, as any musician, I love beer.

12.Before we wrap up this interview, do you have any final words or thoughts
I am pleased that our debut album in one degree or another touched the souls of the listeners. In future we hope to continue our work and please unusual musical discoveries of our fans. From myself, I wish you peace, happiness, success in work, in life and energy in the shower!

Posted by OccultBlackMetal at 2:25 PM No comments: 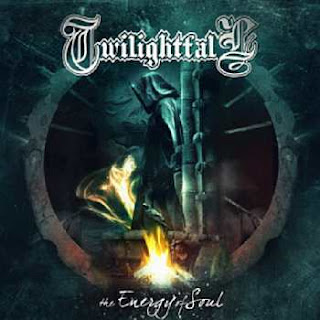 Most  of  the  music  is  heavily  influenced  by  the  Swedish  and  Finnish  melodic  death  metal  scene's  but  done  with  a  more  blackened  atmosphere  and  staying  away  from t he happier  sides  of  those  musical  genres  and  there  is  also  a  great  amount  of  thrash  metal  elements  being  added  into  the  bands  musical  style  at  times  and  acoustic  guitars  can  also  be  heard  in  certain  sections  of  the  recording..

As  the  album  progresses  the  music  starts  to  alternate  more  between  slow,  mid  paced  and  fast  parts  and  the  guitar  solos  start  becoming  one  of  the  biggest  factor  in  all  of  the  tracks  on  the  recording  and  the  symphonic  elements  also  start  having  a  more  powerful  presence  in  the  bands  musical  sound  and  after  awhile  the  vocals  start  utilizing  more  death  metal  growls.

Twilightfall  creates  an  interesting  style  with  their  musical  sound  taking  the  Finnish  and  Swedish  styles  of  melodic  death  metal  and  combining  them  with  thrash,  neo-classical  and  a  touch  of  symphonic  black  metal  to  create  a  very  heavy  and  diverse  album,  the  production  sounds  very  professional  while  the  lyrics  cover  dark  and  metaphysical  themes.

Posted by OccultBlackMetal at 7:32 AM No comments: