1. Can you give us an update on what has been going on with the band since the recording and release of the new album?
We played 5 shows in Germany and Switzerland. Managing digital distribution and our new brand merch. The release party will be the 22 of June in Martigny.

2. You have a new album coming out in June, musically how does it differ from the stuff you have released in the past?
The diversity of the riffs is even more noticeable in this new album. Indeed, these are more sought-after and correspond as closely as possible to the style we want to make appear.
We have also the sound quality that we want.

3. What are some of the lyrical topics and subjects you have explored so far with the music?
In this album the lyrics are talking about how and why the humankind is destroying itself. It talks about chaos and desolation. It’s a kind of story who follows the track number. It starts with the arrival of evil forces and ends with the end of the world.

4. What is the meaning and inspiration behind the name 'Tyrmfar'?
It’s a secret ;)

5. Can you tell us a little bit more about the artwork that is presented on the new album cover?
We asked our friend from Venezuela, John Quevedo Janssens, to draw the artwork for our new album. We send him a description of what we wanted and what the albums talks about and he did this awesome painting for us. We’re really satisfied about that.

6. What are some of the best shows that the band has played over the years and also how would you describe your stage performance?
Last year we played on the second stage of the Metaldays. It was such a great experience. We also played at the mighty Z7 in Pratteln.
On stage we’re all full of energy, headbanging the most we can and trying to give our best performance on each show. For all of us it’s always exciting to play a show, wherever it is.

7. Do you have any touring or show plans once the new album is released?
We have 3 shows planned in Germany and 2 in Switzerland. Other shows will be soon confirmed for France, Germany and Italy. No touring yet.

8. Currently the band is signed to 'MTAF Records, can you tell us a little bit more about this label?
MTAF is the 2nd label of our friend Asterix. The first one, Asgaard Hass, being intended for black metal projects, so the 2nd label has been created to allow other bands in other kinds of metal to be under a label.

9. On a worldwide level how has the reaction been to your music by fans of black and death metal?
Pretty well. I mean, we’re not a big band but we sold our merch worldwide and we have good feeedbacks all around the world. For the new album, we have pre orders in England, Ireland, Denmark, Canada, Germany and Switzerland.

10. Where do you see the band heading into musically during the future?
We will continue to compose in the same vein as our last two albums because that is what makes Tyrmfar so strong. Trying to improve the diversity of the riffs, the quality of the lyrics and the structure of the songs.

11. What are some of the bands or musical styles that have had an influence on your music and what are you listening to nowadays?
Most of the people will tell you Amon Amarth but they are wrong. We are mainly influenced by bands like Kataklysm, At the Gates or Hypocrisy for the Death Metal parts of our music and inspired by Sargeist, Angantyr, Imperium Dekadenz… for the Black Metal passage.

12. What are some of your non musical interests?
We live in the South of Switzerland, in the mountains.. so we all like hiking and enjoy the wilderness with beers or some wine and good stuff. I think it’s part of our music influences too.

13. Before we wrap up this interview, do you have any final words or thoughts?
First thanks for the opportunity to write those few words and express ourselves.
We are extremely motivated and we already working on the next album. It will probably be recorded at the beginning of next year.
Cheers. 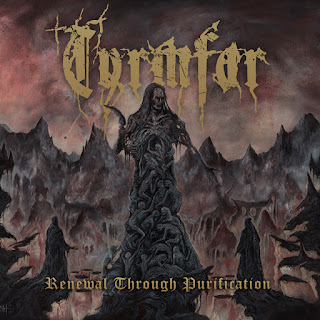 Tyrmfar  plays  a  musical  style  that  takes  melodic  black  and  brutal  death  metal  and  mixes  them  together  to  create  a  sound  of  their  own.  The  production  sounds  very  professional  while  the  lyrics  cover  darkness  and  terror  themes.