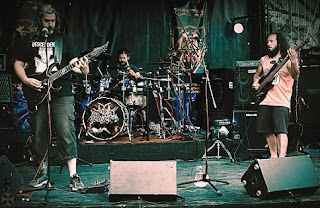 The band was formed after Allan filled in on Bass for a show with MetalTower and the three of us decided to have some fun playing some covers. However, we ended up writing some songs quite quickly instead and decided to to record them and released the EP.

2.Recently you have released an ep, how would you describe the musical sound that is presented on the recording?

Death metal with elements of black metal. The style progresses somewhat as the EP progresses, with more black metal elements forming the main thrust of the style where the last song is possibly a bit more progressive with some thash metal influence. The vocal delivery is mainly in the realms of death metal, although there are some more black metal vocal parts here and there.

3.The band formed out of the flames of 'MetalTower' and 'Nullifier', what was the decision behind leaving those bands and forming a new one?

Those bands still exist, although Nullifier is without a guitar player at the moment. None of us left those bands, more that we formed Sciolism as a side project as something to do while those bands were taking a break and other members went on long holidays.

The main theme of the album is the process of losing belief and shunning rigid ideology while embracing  unrestricted thought and freedom of the mind. The theme of the lyrics roughly follow on from each other as the EP progresses, building a consistent narrative throughout all of the songs.

5.What is the meaning and inspiration behind the name 'Sciolism'?

Sciolism is the act of pretentiously expressing opinions about subjects on which one has limited knowledge or superficial understanding .

So far we have played only one live show, which was just before the release of the EP in January this year. Leading up to this we spent all of our time writing, recording, rehearsing and mixing the EP. Stage performance is straight forward, no gimmicks or anything.

Yes, we are playing at "Under the Southern Cross"  very soon and are playing as a support act for the upcoming Belphegor show in Auckland in May.

We're not actively looking. There has been some interest, but nothing worthwhile for us.

9.On a worldwide level how has the feedback been to your music by fans of melodic black and death metal?

Pretty good, and more than what we've seen locally. That might change after playing more shows locally this year, we'll see.

10.When can we expect a full length and also where do you see the band heading into musically during the future?

Not sure at this stage, but we do have some new material ready to go. We're debating whether we should perhaps just do another EP or a split release in order to get a follow up release out faster.

As for influences, bands like Anata, Dissection, Voices and Thy Primordial. We listen to a range of different music, Dan listens to a lot of Ambient, Punk and Black Metal, Steve is into Power and Death Metal and Allan listens to Thrash/Death Metal and Prog.

Cheers for the interview, hopefully there will be a new Sciolism release soon. 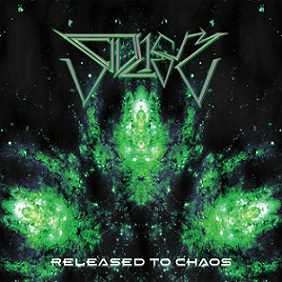 Sciolism  plays  a  musical  style t hat  takes  melodic  black  and  death  metal  and  mixes  them  together  to  create  a  heavy  recording,  the  production  sounds  very  professional  while  the  lyrics  cover  dark  and  philosophical  themes.