11.Are any of the band members involved with any other musical projects these days?
Yes! John is  very much involved in a black metal band from NYC Jotunheim fronted by our friend Arthur who was also Ambient Death's 2nd bass player. lol The NY metal scene is very incestual. lol
Also Jaimen is currently playing with The Gemini Method.
12.Where do you see the band heading into musically during the future?
Not sure! I would definitely like to experiment with some new sounds and new instruments. I always challenge myself in my abilities which helps me grow in my writing and it's very much noticeable if you listen to our albums in chronological order.
13.What are some of the bands or musical styles that have had an influence on your music and also what are you listening to nowadays?
Lyrically and musically I always admired the work of Dissection, Death, Paradise Lost, old Opeth. My non-metal influence always have been Dead Can Dance, Tom Waits, New Model Army to name a few. Right now I find myself listening to a lot of Septicflesh, Sopor Aeternus, Barren Earth, Arcana, Arcturus, etc.
14.What are some of your non musical interests?
Definitely water. I work on the water here in NY harbor and I'm very passionate about it just as much as my music.
Jaimen is one of the biggest graffiti artists in NYC and if you're from NYC you probably have seen his work without even knowing.
John has published a book 'From An Ill Mind' (available through Barnes&Noble website) which is a collection of his short poems. Besides writing he likes to spend his time at his local barber shop trimming his perfect beard like a Bonsai tree. lol
15.Before we wrap up this interview, do you have any final words or thoughts?
Sure. I would like to thank you for giving us a voice and everyone who takes their time to read this and enjoys our music. I also would like to encourage everyone to check out our video for Apotheosis Of The Hangman which was shot on the same stage where Albert Einstein made his speech in late 1800's and more recent Colin Powell. We also have a new video for City Of The Silent coming out any day now!

Posted by OccultBlackMetal at 6:33 PM No comments: 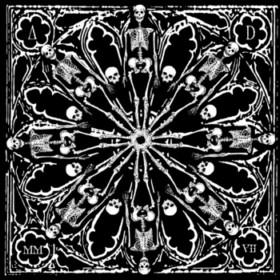 A  very  heavy  and  melodic  sound  starts  off  the  album  along  with  some  high  pitched  screams  that  bring  a  black  metal  feeling  to  the  recording  while  the  music  style  from  the  instruments  are  in  a  more  death  metal  direction  and  the  guitar  riffs  and  leads  incorporate  great  amounts  of  melody  into  their  musical  style.

Ambient  Death  have  a  very  diverse  sound  that  combines  melodic  black  and  death  metal  together  while  also  mixing  in  a  great  amount  of  heaviness,  the  production  sounds  very  powerful  for  being  a  self  released  recording  while  the  lyrics  cover  dark,  anti  religion  and  philosophical  themes.

Posted by OccultBlackMetal at 2:44 AM No comments: