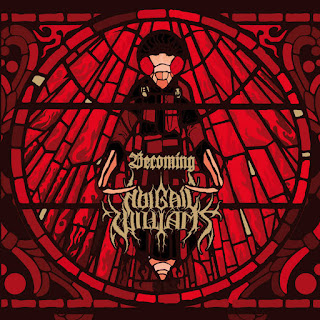 Abigail Williams are a band from New York that has had their previous recording reviewed before in this zine that plays a very mainstream form of atmospheric black metal and this is a review of their 2012 album "Becoming" which will be released by Candlelight Records.

Drums range from slow, mid paced to fast drumming with a good amount of blast beats being thrown into the music, while the keyboards have a very dark, progressive and atmospheric sound with some violins being thrown in at times, as for the bass playing it has a very dark tone with riffs that follow the riffing that is coming out of the guitars.

Rhythm guitars range from slow, mid paced to fast mainstream black metal riffs that also have some progressive, thrash and death metal influences with some dark sounding melodies and clean playing being thrown in at times and there are little to no guitar solos or leads present on this recording.

Vocals are mostly high pitched black metal screams mixed in with a small amount of deep growls and clean singing, while the lyrics cover dark themes, as for the production it has a very strong, powerful and professional sound to it.

In my opinion this is another good album from Abigail Williams and if you where a fan of their previous recordings, you will not be disappointed. RECOMMENDED TRACKS INCLUDE "Ascension Sickness" and "Bestial". RECOMMENDED BUY. 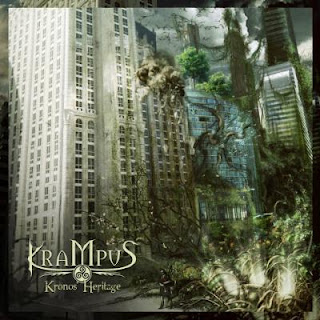 Krampus are a band from Italy that plays a mixture of folk metal mixed with melodic black/death and this is a review of their self released 2011 e.p "Kronos Heritage".

Drums range from slow to mid paced drumming with not much in the way of fast playing or blast beats, while the keyboards and folk instruments bring a very atmospheric and medievel feeling to the music, as for the bass playing it has a very dark tone with riffs that follow the riffing that is coming out of the guitars.

Rhythm guitars range from slow to mid paced riffs that combine folk metal with melodic death and black metal, while the lead guitars have a very melodic sound to the guitar solos and leads.

Vocals are a mixture of high pitched melodic black/death screams and growls mixed in with some clean singing, while the lyrics cover Moral Principles and Values In The Ancient Times, as for the production it has a very strong and powerful sound to it.

In my opinion Krampus are a very good melodic sounding folk/death/black metal band and if you are a fan of this style, you should check out this band. RECOMMENDED TRACK "Aftermath". RECOMMENDED BUY. 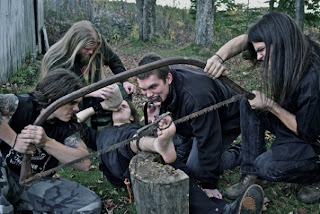 We are a folk metal band with strong black metal influences. We are talking here about the Modern Black Metal sound, not the old black metal and poorly produced sound we used to listen to in the 90s. We mix the catchy side of folk metal with the speed and ambiance of black metal. We also strive to create the stunning guitar sound of modern metal artist such as Children Of Bodem and Black Dahlia Murder to put us aside from other folk metal bands.

2. How would you describe the musical sound of the new album?
Brutal, heavy, fast and so fucking festive :)

3. How would you describe the lyrical content of the music?
The lyrics refer to everybody's life. We write about sad times, good times, all disguised in pagan themes and metaphors so that nobody really gets what we are actually writing
about hahaha... Some of the songs are actually WAY MORE depressing than they may sound like.

4. What is the meaning and inspiration behind the bands name?
Well... it just kinda sounded great and epic hahaha! Nothing special with any particular meaning.

5. What are some of the best shows that the band has played so far and how would you describe your stage performance?
The show at the Bar Octobre in Quebec City was particularly awesome... we managed to give a kick-ass performance with bodysurfing and stage diving despite having a few technical problems! The power-bar where our amps were plugged into burned down and we still managed to finish the show with honours, and we even caught the eye of a local manager! We also did some f***ing awesome shows in the Province of Quebec with our friends from Valcknacht and Valfreya... what a great tour it was!

6. Do you have any touring plans for the future?
Hahaha... We wish to tour for f***ing ever and ever! That's what metal is all about! A European tour would be awesome... isn't that the goal of every American metal band :D

7. On a worldwide level how has your music been received by folk/pagan metal fans?
Well... if we refer to the Youtube views... it is WAY MORE than what we expected! It's actually amazing how much attention we have received from European metalheads! We have over 23,000 views for ‘Beer, Metal, Trolls and Vomit!’ I mean if we compare ourselves to other Quebec metal bands we are among the most famous and well known for our Genre! It is such an honour!
Our label Maple Metal Records has just announced that they have released ‘Beer, Metal, Trolls and Vomit!’ for gameplay on RockBand 3 via the Xbox 360 & PS3 platforms. So look out for the song in the next few months via the Rock Band Network!

8. What direction do you see the music heading into on future releases? For sure faster riffs with more blastbeats and energy!
The epic side of our music will always be primordial, so I would say expect a folk metal album with REALLY STRONG modern black metal influences like Keep of Kalessin or Watain mixed up with accordion and flutes hahahahaha!

9. Are there any side projects besides this band or is this a full time line-up?
Not really, we concentrate all our energy on Nordheim!

10. What are some bands or musical styles that have influenced your music and also what are you listening to nowadays?
It really depends on each member of the band! Everyone has individual influences that they bring into the creative process.  I mean Fred is more into Melodic Metal such as Mors Principium Est and Varg. Benfok is into Cheesy Folk metal such as Alestorm and Ensiferum. Thom is nowadays into Symphonic metal such as Fleshgod Apocalypse and metalcore like Unearth. As for myself ( Warraxe ) I'm now in an old school mood such as Toxic Holocaust, Darkthrone, Nekromantheon ( you gotta check this out thrash metal fans) and other black-thrash metal bands! We all have individual influences in writing music and that's what makes this band so special and interesting!

11. What role does Paganism play in your music and how would you describe your views on this topic?
Eeeee... Absolutely nothing... it is just the fact that we play folk metal that has put us in the same barrel with paganism! I mean we are just some ordinary metalheads playing the music we love and we just don't give a f*** about Odin, Thor or other Scandinavian deities... Some of our lyrics mention Thor or Odin but it is not in eulogy or honour that we talk about them... Can't we just shred the shit out of our guitars while being drunk and not giving a shit about anything… hahahahahaha!

12. Outside of music what are some of your interests?
Beer, booze, lifting weights and naked girls... yeah...

13. Any final words or thoughts before we wrap up this interview?
? We just hope that we will be able to keep on doing the music we love with the people we like! I mean nothing is more worthy than being drunk with our bandmates and friends! Thanks to ALL our fans and keep on supporting NORDHEIM! NUKE THE CROSS!!! 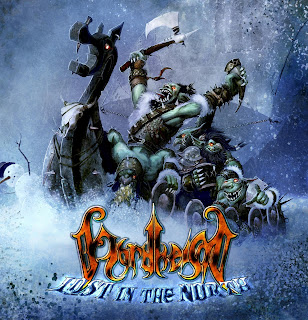