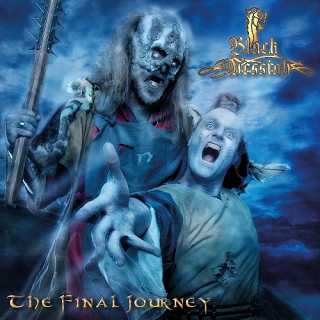 Black Messiah are a band from Germany that plays a very symphonic form of melodic black/folk metal and this is a review of their 2012 album "The Final Journey" which was released by AFM Records.

Rhythm guitars range from slow, mid paced to fast riffs that combine melodic black metal with folk metal, while the lead guitars are very melodic sounding pagan metal guitar solos and leads that also have a traditional/power metal feeling to them, as for the acoustic guitars which are utilized on a few of the songs they use finger picking to enhance the darkness of the darkness.

Vocals are a mixture of high pitched black metal screams mixed in with some clean singing folk metal vocals with one song using a female singer and a brief spoken word part being utilized on one song, while the lyrics cover Teutonic Mythology and Battles with a couple of songs being written in German, as for the production it has a very strong, powerful, heavy and professional sound to it.

In my opinion this is another great album from Black Messiah and if you are a fan of symphonic melodic black/folk metal, you should check out this band. RECOMMENDED TRACKS INCLUDE "Windloni" "Into The Unfanthomed Tower" "Mother Hel" and "Sailing Into Eternity". RECOMMENDED BUY.

Posted by OccultBlackMetal at 8:40 PM No comments: