Cwealm is a misanthropic one-man melodic black metal project founded by myself in 2014. The purpose from the beginning was twofold: to compose music that touches the inner core of the listener, through beauty and violence alike, and to spread a virulent hatred for mankind.

2.Recently you have released your first full length album, how would you describe the musical sound that is presented on the recording?

A bit simplified I’d describe it as Swedish black metal in the mid 90’s No Fashion vein. It’s more progressive than that, for sure, since the songs are quite varied and explore a plethora of themes. But still, that’s very much what it sounds like.

The lyrics focus mainly on death. In different ways, of course, and with various occult themes and anti-abrahamitic sentiments thrown in. The extermination of man, and the annihilation of the universe, are topics that run all through the album.

4.What is the meaning and inspiration behind the name 'Cwealm'?

Cwealm is Old English for death, that’s what I usually tell people. In fact Cwealm has many definitions depending on context: slaughter, torment, pestilence, contagion, etc. For example, ”Þurh deáþes cwealm” means ”through pain of death”. ”Ðú wást cwealm hátne in helle”, further, is Old English for ”thou knowest hot torment in hell”.

I record everything by myself except drums. The drums on this album, Odes to No Hereafter were handled (brilliantly I might add!) by Jocke Wallgren, courtesy of Amon Amarth. So I have no problem working with other musicians, but they will be session or guest musicians, not members of the band.

6. The album was released on 'Dusktone', can you tell us a little bit more about this label?

Well, it’s an Italian label releasing mainly black metal, doom metal and more experimental stuff. I’m proud to be a part of its roster, with many great acts such as Svartelder, Scuorn and Until Death Overtakes Me.

7.On a worldwide level how has the feedback been to your music by fans of black and death metal?

My album was released a week ago, so it’s hard to say, but the response so far has been very positive. I love the fact that folks from all over the world (from Brazil to Belarus!) has shown interest in Cwealm.

8.Where do you see yourself heading into as a musician in the future?

I’m going to write and record another album. But I haven’t even started writing yet, so that’s going to take a while. I don’t really plan for the future as a musician, I just let my inspiration take me where it leads me.

Musically, my inspiration has a lot of sources. I’ve been influenced by about 50 per cent metal and 50 per cent other stuff. Bands like Dissection, early At The Gates, the old Norwegian masters etc. are important of course but also old thrash and death metal, like Dark Angel or Gorguts. For non-metal, I can’t name specific bands, but have been listening to flamenco, classical music, folk, circus music, and it all has inspired me.

What I listen to nowadays? I guess the above gives you a decent hint.

10.How would you describe your views on Occultism?

I have a hard time using words to describe this meaningfully. It depends quite a lot on what you mean by occultism, but Cwealm is a partially occult band. So my advice would be to delve as deep as you can into the music and lyrics of Odes to No Hereafter, and some things will definitely become clear to you.

I’m interested in a wide array of different subjects, e.g. philosophy, psychology and history (which partly explains my BA in the History of Science and Ideas). Other than that I enjoy being with my daughter, working out, and making the world unpleasant for abrahamitic scum.

I’d like to thank all of you who have supported Cwealm thus far, and encourage anyone with a dark soul to purchase Odes to No Hereafter from Dusktone. Ubi mors ibi spes! 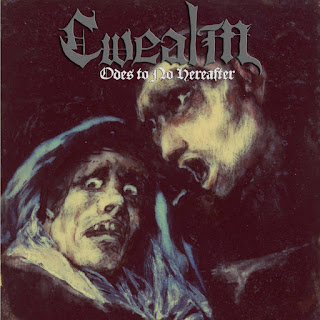 You  can  hear  a  great  amount  of  tremolo  picking  in  the  fast  riffs  and  all  of  the  musical  instruments  have  a  very  powerful  sound  to  them and  acoustic  guitars  can  also  be  heard  in  certain  sections  of  the  recording  which  also  bring  in  middle  eastern  style  scales  briefly  along  with  some  clean  singing  vocals.

Cwealm  plays  a  musical  style  that  takes  the  90's  Swedish  styles  of  melodic  black  and  death  metal  and  mixes  them  together  to  create  a  sound  of  his  own,  the  production  sounds  very  professional  while  the  lyrics  cover  death,  misanthropy,  occultism,  and  annihilation  themes.

Posted by OccultBlackMetal at 8:40 PM No comments: