1.For those that have never heard of you before, can you tell us a little bit about the band?
- First Dawn is a project initiated in 2012. The recording of the Final epoch album started in the summer of 2013 and was finished year later in the fall of 2014. Right now First Dawn exists purely as a studio project so no live shows have been played or planned for the future.


2.In October you had released your first album, how would you describe the musical sound that is presented on the recording?
- In Final Epoch we tried to create a mix of synth soundscape with aggressive metal guitar riffing and drumming. First songs were slower paced ones like the Devastation and evolved from there  to maybe more traditional metal songs like Pilgrimage.

3.What are some of the lyrical topics and subjects the band explores with the music?
-The lyrics basically take place post apocalypse/scifi scenery where remnants of humans leave their ruined earth behind and head To the stars with hope of starting with a clean slate. Underlying theme which also repeats throughout the record is a pessimistic view where nothing is never learned from the past mistakes. The shame of the Devastation caused by the protagonist at the beginning of the story is forgotten in few thousand years and after that it's business as usual :)

4.What is the meaning and inspiration behind the name 'First Dawn'?
-The name First Dawn was proposed in one of our band get-togethers. Sounded cool so we used that.

5.What are some of the best shows that the band has played so far and also how would you describe your stage performance?
-First Dawn hasn't played any live shows.

6.Do you have any touring or show plans for the future?
-There are no plans for playing live with this band. However, we don't want to rule anything out. If something very special or interesting comes up we will definitely consider it.

8.On a worldwide level how has the feedback been to your music by fans of melodic black metal?
-The feedback has been mostly positive. The music for the Final epoch album was made and recorded because we felt these songs were good and deserve to be put out somehow. It has been extremely nice to see that lots of people have liked our music.

9.Where do you see the band heading into musically during the future?
-No new First dawn songs have yet been completed, but hopefully during this year I'll find time to put stuff together for the next FD release. My vision is, at least right now, that the music will be something like Devastation and To the stars (in Final Epoch), further combined with electrical synth based music and orchestral influences.

10.What are some of the bands or musical styles that have had an influence on your music and also what are you listening to nowadays?
-Band and records form many different genres had an influence on Final epoch album. There is obviously lots of metal bands. Finnish bands like Moonsorrow, Swallow the sun and Alghazanth as well as melodic black metal bands like Emperor and Darkspace, to name a few. Also, influences from from movie soundtracks like Blade runner and Terminator had a huge effect on the Final epoch sound.

11.What are some of your non musical interests?
-Well, movies, books and figuring out the world. I'm a fan of scifi and post apocalypse stuff in general, which reflects also strongly in Final epoch lyrics.

12.Before we wrap up this interview, do you have any final words or thoughts?
-Thanks for everyone who have taken time to listen our music. If you like it, spread the word and check out our Facebook.

Posted by OccultBlackMetal at 4:35 PM No comments: 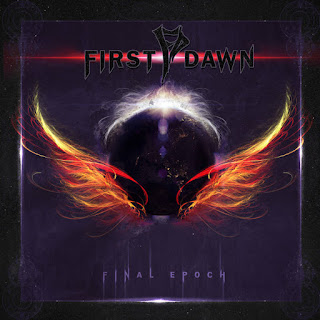 Posted by OccultBlackMetal at 9:05 AM No comments: