We just released the digital version of our new album "Charivari", the CD version will be released soon, and we will be playing in different cities in eastern canada starting june.

2.Recently you have released a new album, how would you describe the musical sound of the new recording and also how does it differ from the ep you had released in 2011?

Our new album is made of new songs and older songs we couldn't record in 2011 due to time limitations. The result is an album that covers the evolution of our sound from the beginning to today. We could say that Trobar took a more progressive turn last years, but our music is still a recipe with different musical ingredients : black and death metal, folk melodies, psychedelic ambiance, acoustic parts and progressive structures.

3.Your lyrics cover Celtic Mythology, how would you describe your interest in this topic?

We have some celtic elements in our music, but our lyrics are more inspired by Québec's legends and history. For example, we have a lot of legends talking about the devil coming to the surface to take the bad people with him in his trolley. In the last song of our album, "Pactés à mort", the devil comes to a tavern and tells the people that the one that will drink a whole barrel of his beer will have eternal life, and the ones that fail will burn with him in hell. This is a story we created, but we took some elements from our legends.

4.What is the meaning and inspiration behind the name 'Trobar'?

Trobar is an old french word describing the art of the minstrels. It has a common etymology with the french word troubadours.

When we started playing, there were not a lot of folk metal bands in our place, so we really enjoyed when people came to listen to another band of another music style and ended up really enjoying our music. One of those great shows was when we opened for "Mononc Serge et Anonymus" in Rimouski. It was a dream coming true when we opened for Korpiklaani, Moonsorrow, Tyr and Metsatöll in 2012. We also had the chance to play a couple of times with the excellent band Unexpect.

We will be playing in Québec on june 27, Montréal on june 28, and Rimouski in september. More shows are to be announced.

For now, we focus on our new album. We want to keep our independence but we stay open for any opportunities that could make our band progress.

We already are working on some new songs. In our opinion, these songs are a proof that we are still improving our sound and that the best days are in front of us.

Of course, we have been influenced by folk metal bands like Moonsorrow and Korpiklaani, but we also have influence from Québecois traditional music, more prog bands like Opeth, and 70s English and Québecois prog-rock bands like Jethro Tull, Harmonium, etc. We like to experiment with different kinds of music, for example fusion jazz, funk, various world music, etc.
The six of us listen to a large variety of musical styles, having in common metal music of course.

People in our band have very diverse interests. We have a physician, a radio operator, some artists (we made our artworks ourself). We are interested in literature, content creation, politics, geography, history, gaming, etc.

Thanks for your interest, and don’t forget to listen to our album available on Bandcamp, and to follow us on Facebook!

Posted by OccultBlackMetal at 3:38 PM No comments: 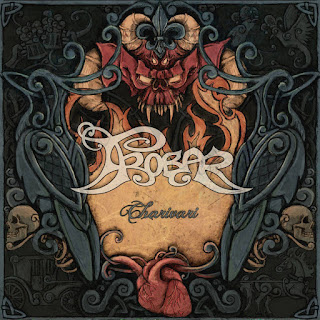 Nature  sounds  and  synths  start  off  the  album  giving  the  music  a  folk  music  feeling  along  with  acoustic  guitars  that  add  a  progressive  and  medieval  feeling  to  the  recording  and the  band  also  starts  to  add  in  more  folk  instruments.

Trobar  bring  a  more  progressive  and  darker  approach  to  their  folk  metal  sound  while  also  mixing  in  the  heaviness  of  black  and  death  metal,  the  production  is  very  professional  sounding  and  the  lyrics  are  written  in  French  and  cover  Celtic  Mythology.

Posted by OccultBlackMetal at 10:59 PM No comments: