1.For those that have never heard of you before, can you tell us a little bit about the band?
Star Insight is a melodic and symphonic metal band. The band was founded in 2005. The band has released four self-publish. Summer 2014 debut album, Messera, is published by Inverse Records. We have already released a music video “Emanuela” from the album. You can found it from Youtube.

The band's music combines many elements: symphonic sections, machinelike sounds, punk riffs, ambient and a little piece of power metal. Traditional roaring vocals complemented by fresh vocals. The song's lyrics are mostly fictional and themes are anything between heaven and earth.

For a start Star Insight was a side project (or a hobby of mine) but now, our activities are more serious. My role is to compose music. I play guitar in the band.

2.You have you first full length coming out in August, can you tell us a little bit more about the musical direction of the newer material and also how does it differ from the stuff you have released in the past?
2. We chose carefully nine best of the best, most different songs for this album and the idea was to keep it as compact as possible. Maybe the forthcoming albums are longer? If you ask me, older songs were a bit dull. So when I wrote new songs, I tried to make newer songs more interesting and long lasting.
3.The band calls themselves 'space black metal' can you tell us a little bit more about this label?
3. That´s actually a bit old description :) These days we call ourselves Symphonic/melodic metal band. We like to combine many musical styles: punk, ambient and electronic music. But “space metal” is music like The Kovenant :)
4.This is so far the bands first full length and while there where demo's, singles, and ep's what was the cause of waiting 9 years to release a full length?
4. Like I said, Star Insight was only a project for a long time. Maybe we needed those years to crow and became what we are now? We also needed good material for the album and money to make this project possible and they both took some time… We also wanted to make music videos beside the album.
5.What are some of the lyrical topics and subjects the band explores with the music?
5. There´s many topics... pain, anger, frustration, sadness.....Like most of the songs that comes from Finland :D We are that happy nation. I don’t know how to make music about unicorns, rainbows and bunnies. I hate happy music.
6.What is the meaning and inspiration behind the name 'Star Insight'?
6. My first idea was Star Inside. My friend Teemu Rantanen (former member of the band) suggested Insight instead of Inside because it looked better. I wanted to put "in" to bands name ´cause I just like it, example In Flames. First idea was to make so called "space metal" such as The Kovenant... so Star became from that space idea.
7.What are some of the best shows that the band has played so far and also how would you describe your stage performance?
. We have had some gigs but cannot say the best yet. We try to get better every time and be more aggressive...if possible. When you see us on stage you´ll know what I mean :) We are not standing quiet and still.
8.Do you have any touring or show plans once the album is released?
8. We don’t have any tour ideas yet for the autumn, but we have some gigs during this summer before the album is release. Hey, you can book us for the gig!
9.On a worldwide level how has the feedback been to your music by fans of extreme metal?
9. Mostly good. We have more and more fans around the world. We have had some bad feedback too, but when I read/hear those, I´ll make even better songs. It´s like "We´ll show you, assholes!!" :)
10.Are any of the band members involved with any other musical projects these days?
10. Pekka plays also in the band called "Arina". Aapo plays in "Ravenshine" and Jesse plays in "Stone Mammoth". I make music also by my own name for other bands too.
11.Where do you see the band heading into musically during the future?
11. More bigger, powerful sound and better, more varied songs. You’ll see!
12.What are some of the bands or musical styles that have had an influence on your music and also what are you listening to nowadays?
12. Here´s a few bands that I like and listen nowadays: Nightwish, Shade Empire, Tool, Samael, The Kovenant, Dimmu Borgir, Cradle Of Filth, The Offspring, Sybreed, Fear Factory,... and movie soundtracks. They all affect to the music I make.

13.What are some of your non musical interests?
13. I have a family, wife and kids, so I don’t have so much spare time after my job, Star Insight and other music hobbies, but I like watching movies and tv-series (after kids bedtime :D ) such as: Game of Thrones, True Blood, Vikings and The Walking Dead.
14.Before we wrap up this interview, do you have any final words or thoughts?
14. I hope that everyone will like our debyt album. Follow us on Facebook for recent news. I hope we can play in many different countries and see you guys on our gigs! 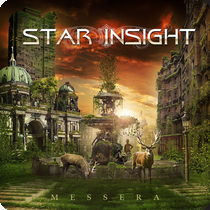 A  heavy  and  symphonic  metal  sound  starts  off  the  album  along  with  some  black  metal  vocals  and  you  can  also  hear  a  decent  amount  of  industrial  elements  being  added  into  their  symphonic  black  metal  sound  and  after  awhile  melodic  guitar  solos  and  leads  start  becoming  a  huge  part  of  the  recording  along  with  some  gothic  rock  elements.

Star  Insight  takes  a  symphonic  style  of  black  metal  that  is  heavily  influenced  by  The  Kovenant  and  takes  it  into  a  more  modern  metal  direction  while  also  being  heavily  influenced  by  industrial  music  to  create  their  own  sound,  the  production  sounds  very  professional  while  the  lyrics  cover  every  thing  between  heaven  and  earth.

Posted by OccultBlackMetal at 5:58 AM No comments: