Acoustic  guitar  playing  starts  off  the  compilation  before  going  into  a  heavier  direction  while  the  symphonic  elements  are  also  mixed  in  with  the  heavy  parts  off  the  songs  along  with  the  faster  sections  of  the  songs  also  bringing  in  a  great  amount  of  blast  beats  and  the  vocals a re  a  mixture  of  black  metal  screams  and  death  metal  growls.

Clean  male  and  female  vocals  can  also  be  heard  briefly while  some  of  the  tracks  are  very  long  and  epic  in  length  along  with  the  music  also  capturing  the  atmosphere  of a  science  fiction  movie  soundtrack  as  well  as  mixing  in  elements  of  orchestral  and  classical  music into the  more brutal  parts  of  the  songs.

On  this  compilation  Rapheumets  Well  brings  out  some  of  the  best  symphonic  and  progressive  black/death  metal  material,  the  production  sounds  very  professional  while  the  lyrics  cover  their  self  created  science  fiction  lore  which  focuses  on  the  fictitious  universe  of  the  Atai.

https://youtu.be/kPym5DiG700
Posted by OccultBlackMetal at 8:58 PM No comments: 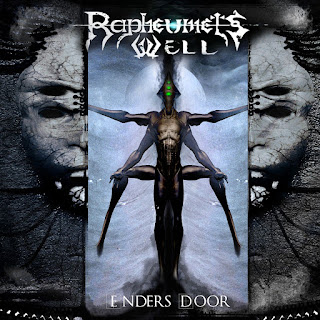 Rapheumets  Well  creates  another  recording  that  remains  true  to  the  progressive  and  symphonic  mixture  of  black  and  death  metal  from  previous  releases,  the  production  sounds  very  professional  while  the  lyrics  cover  science  fiction  themes.

We have been working on amplifying our stage performance and visuals as well as gearing up for tours.  Touring is our main mission now as we want to reach abroad, sharing our music internationally.  Recently we have even taken to acting lessons to help give us some more tools in our stage performance.

It has more emotion, more personal connections with it in contrast to the story in which it represents.  Being a science fantasy story, it is important to convey the story in such a way musically that the person feels the lore more than just giving the illusion. We have more technical riffs in on this album and faster burst of drumming, but all in all it is a more vibrant album than our first album "Dimensions".  Dimensions was portrayed a darker feel.  The Exile has a more demanding feel with a epic overtone that makes it more colorful in terms of sound textures.  Also adding a female opera singer and the complex leads of our newest guitarist makes it an more mature album in our musical evolution.

3.From 2007 to 2014 there was no music being released, can you tell us a little bit more about what was going on during that time span?

Well, it is very complex.  Merging 5 to 6 personal universes together for a single mission is quite a task and much like chemistry, certain elements can cause a disastrous reaction. Finding balance in attitudes and musical appreciation takes time though we are happy to say, we believe we found it. But yes, there is a myriad of actions that have taken place which has stunted our progress but time has given us a bit more wisdom to work with.

4.Your lyrics have a sci fi and fantasy theme concept to them, can you tell us a little bit more about the song writing?

Our story is very deep, maybe too much for a 8 to 10 song album.  We developed a basic understanding for a multiverse and a verse in which consciousness is a force similar to electromagnetism, gravity, and the strong and weak nuclear forces.  We developed this hierarchy of powerful beings, created to aid in the propagation of sentient life.  We talk a lot about the formation of each multiverse in its birth, evolution, and decay. Matter is woven from the.  Deviations in the stream allow for dimensions to exist like a bubble in a pond.  But  this extends in quite a depth.  Then comes the comsic drama.  Beings loose favor, entire planets are destroyed, entire planetary systems wiped out. You see, there are these beings called the Atai which are "near" immortals who are coined "the architects" or sentinels.  They are quite powerful and very odd beings who in some ways, aid in the evolution of the dimension. The elder beings Sainath, Soyumoth, Eyu Na, Tael Udwafael, along with five others are locked into a war and that is where our story starts on the first album.

The second album is abit more personal and takes place on a planet called Vranath Su and is from the perspective of a military commander who challenges a rouge Atai who begins mining people for s their organic fluids to feed a rare mineral which is built into a gate which can bend space and time, thus bringing forth the antagonist from the first story who was banished (well, it is a lot more complicated than thaat ha). The Main character Darmak defies his conquest and is tortured is a very insidious way.  He watches his family being murdered and he himself has his skin ripped from his bones many times a day (cursed with eternal life) in hopes that his very spirit is fragmented which is the ultimate death.  But, he ends up kicking some butt and blowing up the planet ha!!


5.According to the fb page the band also has an interest in ancient mythology, metaphysics and astronomy, can you tell us a little bit more about your interest in these topics?

Well, some of us are quite academic.  My self, I spent eight years in medical school in which I took anthropology classes, physics, and many of us have a affinity towards mythology.  in a subtle way, our music hints abit at the "ancient alien" concept though we do not prescribe purely to their shared beliefs or methods.  But, we do find value in science and the art equally which is used in creating our own science fantasy mythology.  Even my medical degree sheds light on Taoist philosophies and eastern constructs in which provokes thought. We like to be exploratory, educational, and entertaining with our topics in music.

6.Originally the band was known as 'Blue Man's God', what was the decision behind the name change and also the meaning and inspiration behind the name 'Rapheuments Well'?  Well, we came up with this name many years ago and before the band "Blue Man's Group" came out.  You can already see the problem here. Jokes persisted and people thought we were some how affiliated with Blue Man's Group (which I really like by the way).  Rapheumets Well is a name constructed in our own universe.  Here is the actual definition:  Rapheumet is the name of a deity personified as a trickster, “a master of portals and inter-dimensional travel” who “often creates chaos for unsuspecting voyagers”, and in the band’s name “Well” refers to gravity wells, “which like black holes are catalysts of change and gateways between the cosmic plains.”

Well, our most memorable has to be playing with Black Crown Initiate recently as well as Unleash the Archers.  Both bands inspired us.  Just seeing they dedication to their craft as well as their love for their fans.  We opened for these bands and the response was great.  We were able to learn alot which will serve us in our future endeavors.

Yes, we are already scheduled for a tour coming this July.  Past that, we are working closely with Test Your Metal Records and our label owner and manager Grant Truesdell in developing more tours internationally.

9.The new album was released on 'Test Your Metal Records', can you tell us a little bit more about this label?  Test Your Metal Records was founded by Grant Truesdell who is also the guitarist for the renown band Unleash the Archers on Napalm Records.  He has been absolutely amazing in giving us hope and guidance.  He really works with us and is crystal clear about the objectives. He actually cares for the musicians on his label.  Test Your Metal Records is a rising label in which we have already grown a loyalty torwards.  It is the labels mission that is important, which actually focuses on helping the band acquirer the tools for success.  it is a partnership of a sorts, a feedback system in which makes us work equally as hard and we appreciate that.  We firmly believe that big things will keep rolling from this label.

10.On a worldwide level how has the feedback been to your music by fans of black, death, symphonic and progressive metal?'

Well, so far it has been outstanding.  Our international fan base has grown and mostly positive feedback.
11.Are any of the band members currently involved with any other bands or musical projects these days?

Well, I am working with a band called Enthean from our area in whcih I am doing some drum work for.  They are phenomenal musicans and they are gaining some well deserved attention  Our gutarist Hunter Ross has a project called Carving the Architect which is amazing.  So, we doing a lot of "sharing" between the bands here.

12.Where do you see the band heading into musically during the future?  We have no limits so it is hard to say.  International tours, and developing a following both musically and for our story.  It is my hope that a video company may take notice or even a comic book company to make our story come to life.  This is our sole passion so we looking for this to be our predominant career.

13.What are some of the bands or musical styles that have had an influence on your music and also what are you listening to nowadays?

But, just as much we are inspired by our native bands such as Enthean, Everthrone, Crow Hollar, Neverfall, Occido, Kill the Host, Daedalus, Blood Written, Necrocosm, Skinn Jakkitt, Marrow of Earth, Black Demize, and Behind the Sun to list a few have been the foundation of the scene here in the south east and I feel they deserve the attention.
14.What are some of your non musical interests?
Well, we have some martial artists practitioners and a weapons instructor in the band as well as a acupuncturist.  We are from the mountains so we tend to engage in some camping, fire building, squirrl eating, you know, mountain hillbilly things.  We have actress in the band and we are all video game fanatics for the most part.  We enjoy trying to unravel the mysteries of the cosmos but more so we like Chinese buffets.

Well, we are very appreciative of your time and for you allowing us to speak.  We are humble musicians working hard for our passion, like so many other bands.  We are hoping to bring some attention to our area of the Carolinas as their is a lot of untapped potential here.

Posted by OccultBlackMetal at 6:37 PM No comments: 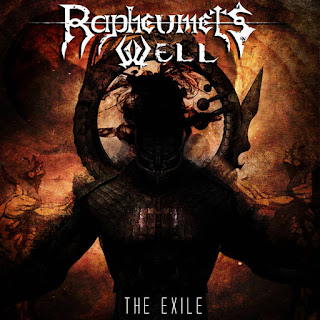 Classical  guitar playing  starts  off  the  album  and  after  a  few  seconds  starts  going  into  more  of  a  brutal a nd  fast  symphonic  direction  along  with  a  great  amount  of  blast  beats  and  death  metal  growls  and  you  can  also  hear  melodies  and  technical  elements  in  the  guitar  riffing  and  after  awhile  black  metal  screams  start  becoming  a  very  huge  part  of  the  recording.

Rapheumets  Well  plays  a  musical  style  that  takes  the  symphonic  styles  of  black  and  death  metal  and  mixes  them  together  to  ad  something  different  to  the  genre,  the  production  sounds  very  professional  while the  lyrics  are  a  concept  album  based  upon  their  own  sci  fi  and  fantasy  creations.

Posted by OccultBlackMetal at 7:21 PM No comments: