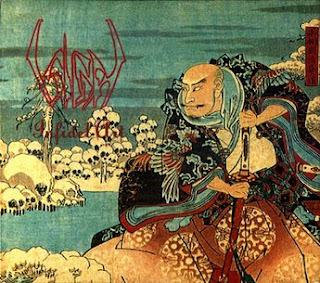 Sigh  played  a  style  of  black  metal  on  this  recording  that  was  very  original,  experimental,  avant g arde  and  symphonic  for  its  era  and  also  helped  influence  a  lot  of  later  bands  with  this  album,  the  production  sounds  very  professional  while  the  lyrics  cover  Shinto  Mythology,  Occultism,  Suffering,  Insanity  and  Death  themes.

Posted by OccultBlackMetal at 5:12 PM No comments: 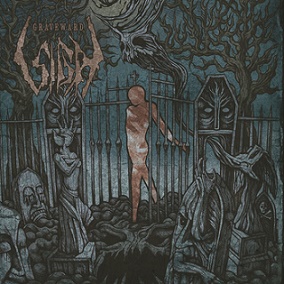 A  melodic  guitar  lead  which  also  dominates  throughout  the  album  and  symphonic  sounds  start  off  the  album  along  with  the  guitars  using  a  lot  of  old  school  metal  riffs  and  after  awhile  high  pitched  black  metal  screams  and  deep  growls  are  added  onto  the  recording  and  you  can  also  hear  a  decent  amount  of  clean  singing  vocals  in  certain  sections  of  the  recording.

Sigh  creates  another  album  that  is  still  very  heavily  rooted  in  black  metal  but  just  like  with  previous  efforts  the  music  also  remains  avant,  garde,  symphonic  and  original  sounding  while  the  band  has  gotten  back  a  lot  of  their  heaviness  over  the  years,  the  production  sounds  very  professional  while  the  lyrics  cover  horror  movie  themes.

http://www.earsplitcompound.com/site/2015/04/17/sigh-legendary-japanese-avant-extreme-metal-quintet-to-release-tenth-studio-album-via-candlelight-next-month-new-tunes-posted/
Posted by OccultBlackMetal at 4:37 AM No comments: 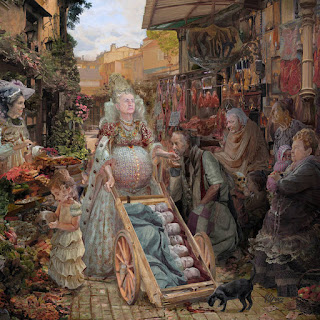 Sigh are a band from Japan that has one of their older albums reviewed before by this zine that plays a very symphonic and experimental form of black metal and this is a review of their 2012 album "In Somiphobia" which will be released by Candlelight Records.

Drums range from slow, mid paced to fast playing with some blast beats being thrown in at times as well as some tribal sounding percussion, while the keyboards bring a very symphonic, experimental and psychedelic feeling to the music mixed in with some violins and saxophones that bring out the Japenese culture in addition there are some avant garde noise effects, as for the bass playing it has a very dark tone with riffs that follow the riffing that is coming out of the guitars.

Vocals are a mixture of black metal screams, deep growls and clean singing male and female vocals with a brief spoken word part being utilized on one song, while the lyrics cover dark themes, as for the production it has a very strong, powerful, heavy and professional sound to it.

In my opinion this is another great album from Sigh and if you are a fan of this band you should enjoy this recording. RECOMMENDED TRACKS INCLUDE "Purgatorium" "The Transfiguration Fear Lucid Nightmares" "Far Beneath The In-Between" and "Amongst The Phantoms Of Abandoned Tumbrils". RECOMMENDED BUY.

https://www.decibelmagazine.com/2012/02/14/join-sigh-far-beneath-the-in-between/
Posted by OccultBlackMetal at 7:43 PM No comments: 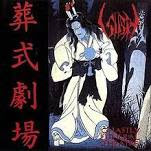 Sigh are an avant garde symphonic black metal band from Japan and this is a review of their classic 1997 album "Ghastly Funeral Theatre" which was released by Cacophonous Records.

Drums are mostly mid paced beats throughout the album with no fast playing or brutal blast beats, there is a small amount of saxophone on this album and the orchestra on this recording sounds very symphonic and avant garde with influences from 70's progressive rock, as for the bass playing it follows the riffs that are coming out of the guitars.

Rhythm guitars are a mixture between fast riffing mixed in with a small amount of black metal riffing that contains a lot of melody, while the lead guitars are very melodic and bring in a lot of 70's rock into the guitar solo's.

Vocals are mostly high pitched black metal screams with some deep growls mixed in with some clean singing male and female vocals, while the lyrics touch on the darker side of Shintoism which is an ancient Japanese religion,

In my opinion Sigh are a very talented band and this was one of their best albums, if you are a fan of symphonic/avant garde black metal chances are that you have already heard this band. RECOMMENDED TRACKS INCLUDE "Doman Seman" and "Shikigami". RECOMMENDED BUY.

Posted by OccultBlackMetal at 3:36 PM No comments: