The Wolves Of Avalon Interview

1.Can you give us an update on what has been going on with the band since
the recording and release of the new album?
We are trying to get together a video track for You Tube, and we also have
a Venom cover ‘Die Hard’ that we have as an extra track on a vinyl edition
if all works out well. There will also be a new Meads of Asphodel to write
in the next 6-8 months.
2. Recently you have released a new album, how would you describe the
musical sound that is presented on the new recording and also how does it
differ from your previous album and split?
The music is relatively the same. Mid-tempo pagan folk metal with violin,
mandolin and flutes. The new album is more polished, more subtle and less
abrasive that the first. You can tell it’s the same band, but with all
progressions, you can notice the difference of production and song
structuring.
2.The lyrics on the new recording are a concept album, can you tell us a
little bit more about it?
The album is about the great ancient British war leader, Boudicca. She was
a tribal queen of the Iceni, and lived approximately 2000 years ago. The
land was under the oppressive yoke of Rome
It was an age where the great Druid centre of Anglesey was totally
destroyed and most of the Druid culture wiped from the face of the Erath.
Boudicca rebelled and fought against this invader and although inflicting
terrible casualties ultimately lost her life and hopes in one final
battle.
3.I know that the band name comes from Celtic Paganism, can you tell us a
little bit more about your views on this topic?
I am more inclined to look upon the ancient pagan belief system than the
corrupt and rotten dogma of Christianity. The nature Gods of the ancients
have meaning for the lives that existed at the time, winter and summer,
water and crops, each providing the cycle of seasons that create the
essence of life for the farming tribes. I despise the concept of
worshiping a redeeming deity whose father had a preordained scheme of
original sin followed by penance on a cross, followed by complete
doctrinal nonsense. What’s that shit all about???
5.What are some of the best shows that the band has played so far and also
how would you describe your stage performance?
We have never played live so this question is hard to answer.
6.Do you have any touring or show plans for the new album?
No, this band has no plans to do any shows.
7.On the new album you have some well known musicians doing some guest
vocals, how did you get in contact with these musicians and also where you
satisfied with what they brought onto the album?
I have been in contact with Thurios and Varggoth for many years through
distro trades or general band respect. I am very honoured to have members
from Drudkh and Nokturnal Mortum doing guest vocals and as we all share a
deep belief in our lands lost identities and ancient ways. It has nothing
to do with politics or racist views as some idiots will no doubt groan
about. We are a band who speak of past events that have shaped out times.
8, You also did a cover of Enslaved's "Essence" what was the decision
behind doing  your own version of this song?
We actually did this track for an Enslaved tribute album that did not sell
very well as far as I can tell.  It felt right to put this track at the
end of this album as the atmosphere and overall feeling to the song is
well balanced.
9.On a worldwide level how has the feedback been to the new album by fans
of pagan and folk metal?
It is too early to say, but so far it has been very positive. Only time
will tell.
10.What is going on with some of the other musical projects these days
that some of the band members are a part off?
For me it is, The Meads of Asphodel. We are working on the next album now
and this should appear in mid-2015.
James Marinos is in other bands outside the metal realms but none to be
named.
11.Where do you see the band heading into musically during the future?
I would like to think we will progress along the same path of folk pagan
metal. Maybe get some other guests that we respect in the music world, and
try out more elusive old style instruments and vocal patterns.
12.What are some of the bands or musical styles that have had an influence
on your music and also what are you listening to nowadays?
I am listening to a great Polish band, Wedrujacy Wiatr, They are like the
great Russian bands, Walknut, or, Forest. Really good dense atmospheric
black metal.  Many bands have influences us as metal fans, From Hawkwind
to Bathory, Drudkh, Venom, Enslaved, too many to mention, but musically it
is  our style and I would hope you will not be able to compare the Wolves
of Avalon with any other band out there.
13.What are some of your non musical interests?
I read and absorb as much as I can about ancient history, theology and the
shit that goes on and has gone on in this world we wake up to every day.
James likewise, absorbs his own paganism and British landscapes. James
spends much time visiting our ancient landmarks and walking across the
northern hills.

14.Before we wrap up this interview, do you have any final words or thoughts?
Just to thank you for your time in asking these questions and that we all
in the Wolves of Avalon hope people will enjoy the music as much as we
enjoyed creating it.
I bid you well
Metatron

Posted by OccultBlackMetal at 5:30 AM No comments: 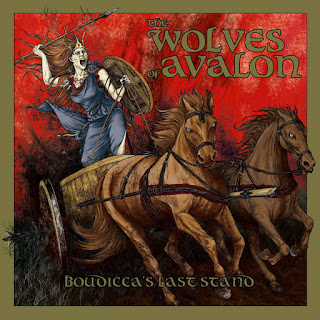 Keyboards  can  be  heard  in  certain  sections  along  with  some  clean  singing  female  and  male  vocals  and  the  heavier  parts  bring  in  the  pagan  sound  and  after  awhile  death  metal  growls  start  popping  in  at  times  and  the  guitar  leads  are  very  melodic  sounding  and  as  the  album  progresses  the  aggressive  vocals  start  bringing  in  more  elements  of  black  metal.

The  Wolves  Of  Avalon  creates  a  very  interesting  style  of  pagan  metal  that  takes  the  heaviness  of  black  and  death  metal  and  mixes  it  with  Celtic  folk  music  and   the  combination  sounds  very  great  and  epic  sounding,  the  production  sounds  very  professional  while  the  lyrics  cover  Celtic  Pagan  and  Boudicca  a  queen  who  took  a  stand  against  Rome  after  the  great  druid  sanctuary  of  Ynys  Mon  was  ruthlessly  destroyed.

Posted by OccultBlackMetal at 5:10 PM No comments: