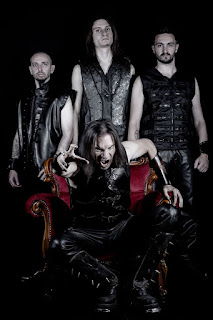 For those that have never heard of you before can you tell us a little bit about the band?

Recently you have released an album, how would you describe the musical sound that is presented on the recording?

With the album we aim at making a hybrid music between, on the one hand, an epic sound with orchestra and choirs and, and on the other hand, brutality brought by blasting drums, dark riffs and extreme vocals.

Some of your lyrics deal with Singularity and the writings of Kurzweil, can you tell us a little bit more about your interest in those topics?

The song “Singularity” is the point of view of the first enhanced human who becomes, in a certain way, a god among men. It deals with the topic of transhumanism. This theme fascinates me because it sounds like Sci Fi but it will be real very soon and it will raise ethical issues.


What is the meaning and inspiration behind the name 'Entropia Invictus'?

ENTROPIA INVICTUS mean in Latin “entropy inevitable/invincible”. Entropy is a thermodynamic term which measures a system’s chaos. And this chaos can only become bigger and bigger. We think that this idea of an unstoppable force always in progress fits with the band’s mindset.

What are some of the best shows that the band has played so far and also how would you describe your stage performance?

The best show that we played was perhaps during the Rock Metal Camp Fest in France. Our music is very theatrical so we try to create a staging that respect nuances because our set is composed of brutal and speed parts but also quiet and melancholy ones.

Do you have any touring or show plans for the future?

On May 9th we will play with your compatriot of Fleshgod Apocalypse in France. We are honored to do the opening for the kings of this style.

On a worldwide level, how has the feedback been to your music by fans of symphonic black metal?

The feedback is great. “Human Pantocrator” has been preordered in many country (Japan, Germany, Italy…) and comments about our video “I will overcome” are very positive.

Are any of the band members currently involved with any other bands or musical projects these days?

None of us is involved with another project, we are focused on ENTROPIA INVICTUS for now.

Where do you see the band heading into musically during the future?

What are some of the bands or musical styles that have had an influence on your music and also what are you listening to nowadays?

Septicflesh, Carach Angren, Behemoth have an influence on our music but also movies music, classical music. Nowadays I’m listening to “King” of Fleshgod Apocalypse, for me it’s a perfect balance between classical music and death metal.

The literature is one of my non musical interests. I read a lot of books of Sci Fi, Fantasy, Thriller, Philosophy, Psychology. I read one or two books per week.
I also go very often to the cinema to watch many kind of films, from blockbuster to art film.

Before we wrap up this interview, do you have any final words or thoughts?

Thanks for this interview. I hope you will be pleased to listen to our last album “Human Pantocrator” as much as we are pleased to play it.

Posted by OccultBlackMetal at 6:39 PM No comments: 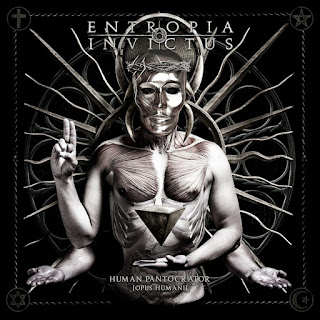 Entropia  Invictus  plays  a  musical  style  that  takes  symphonic  black  metal  and  mixes  it  with  death  metal  to  create  a  sound  of their  own,  the  production  sounds  very  professional  while  the  lyrics  cover  futurism  and  anti  religion  themes.

https://www.youtube.com/watch?v=wI1kiFiC_kg&feature=youtu.be&utm_source=sendinblue&utm_campaign=ENTROPIA_INVICTUS__Human_Pantocrator_EN&utm_medium=email
Posted by OccultBlackMetal at 7:34 PM No comments: