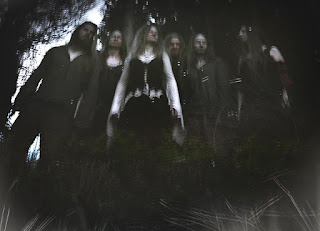 Well not much really. We recorded back in april, then we planned the release and on the 3rd we release it during a magnificent release party in Copenhagen.
A small trip to play in Estonia in between that but otherwise it has been pretty quiet.

Overall it should still sound like us, but in a more mature fashion. The songwriting on the last album could sometimes be fairly chaotic and a lot of stuff is happening at the same time, but on Tusmørke we have tried to control the chaos, and give more room to each other. Allowing the individual "voices" to have, and fill, their own spaces in the composition and work and weave better together as a whole.

3.This is the first album to be released in 4 years, can you tell us a little bit more about what has been going on during that time frame?

Intet Menneskebarn was so well received that it allowed us a lot of live gigs, which in turn allowed us to practice and hone our skills on stage. That album brought us far, and it especially took off after we won the danish wacken metal battle, and got third place at the wacken festival itself. Besides having the honor of playing Wacken, it opened up for more gigs and the bigger metal festivals in Denmark, including taking second largest stage at Copenhell, and stand in front of thousands at the belgian fantasy festival "Trolls & Legends". All amazing experiences.
We also spent some of the time writing new material of course, and trying it out on stage.

4.Your lyrics deal with a lot f Nordic Mythology, can you tell us a little bti more about your interest in this topic?

We all come from some form of background in viking reenactment and authentic medieval/viking music so there is a natural interest for the subject among us in the band, but the lyrics actually deal more with inspiration from folklore stories and the Nordic Nature and old believes. Only the song Mørke can refer to a later kind of Odin Figure from East Denmark. Most of the lyrics on this album Is very dark: death, sorrow, anxiety, dark Scandinavian nature-creatures who interacts with human lives, old folk remedies, people who turns in to creatures etc. are some of the topics.

5.What is the meaning and inspiration behind the name 'Huldre'?

Huldre is the name of a creature in scandinavian folklore. Described chiefly as a very beautiful female, with a tale and a hollow back, who will lure men to their deaths in the forest or bogs. We figured that was a pretty good metaphor the music that we create

Wacken, Copenhell and Trolls & Legends must surely rank high due to the sheer amount of people and the experience of playing at pro festivals. Beyond that, anywhere where we are greeted and treated well, and people are happy to see us, are good gigs.
Our stage performances are wild and joyfuld. Mosh pits and dancing goes hand i hand, and you can always tell that we love to play this music.

We have a special show coming up on the 26th of november at Gimle in Roskilde, together with bands from all over Scandinavia; Audn, Bergtatt, Fejd and Hamferd.
Other than that, we are working on setting up some good stuff for the coming year so stay tuned for that.

8.The new album was released on Gateway Music, can you tell us a little bit more about this label?

Gateway is not really a label in the traditional sense. Its connected to the "Danish Musicians Union" and the TL:DR: version is that its a "label" that you can more or less hire to handle the practicalities of releasing an album yourselves. Physical as well as digital distribution is handled by them, but otherswise we handle everything ourselves.

9.On a worldwide level how has the feedback been to your music by fans of folk metal?

Really good so far. We haven't really seen any bad reviews and it appears that a lot of people appreciate our sound and approach to folk metal.

There is always something going on, you know. Our drummer is perpetually busy with a band like Virelai and Asynje, which also contains 2 other members of the band. Most of the band is also in Gny, which is a medieval band. So yeah, a lot of stuff is happening.

Thats impossible to say. We go wherever the music takes us.

12.What are some of the band or musical styles that have had an influence on your music and also what are you listening to nowadays?

Nothing really. Or all of it. Our band is run on consensus and that goes for the compositions as well. Especially the compositions. So the music becomes a product of 6 individuals approach to music which means 6 individual paths of inspiration and music.

ooh. A lot. Varying from nerdy stuff (games of all kinds) to trees, and nature. Long walks on the beach in the moonlight while singing a serenade to the nearest tree


Thanks for having us and thanks for the nice review. Folk on :o)

Posted by OccultBlackMetal at 5:09 AM No comments: