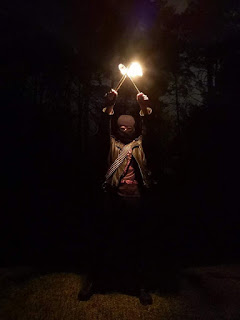 .For those that have never heard of you before, can you tell us a little bit about the musical project?

Golden Blood came to life in early 2020. I was writing the debut album for Order of Ištar at that time and the songs came out a lot thrashier and heavier than I thought, so Golden Blood was born to give home to these songs.

2.Recently you have released an ep, can you tell us a little bit more about the musical style you went for on the recording?

I didn’t have a specific genre or style in mind. I spent my early teens listening to mostly punk and hardcore and I think you can still hear that in the songs. They turned out quite catchy and don’t need a huge build up or get lost in repetitive structures.

3.What are some of the lyrical topics and subjects you have explored so far with the music?

The title track of the debut EP deals with sex & drugs and Nightfall captures the feeling of being out drunk with your crowd. So everyday life. Golden Blood is not about deep and meaningful lyrics, it’s about fun and pleasure.

4.What is the meaning and inspiration behind the name 'Golden Blood'?

The Indonesian artist Deggeha is responsible for that. Mother Mary is torturing a demon and then has a drugged feast with her son in the other picture. There is no deeper meaning or anything open to interpretation in it. You get what you see. That applies to the music as well.

6.With this project you record everything by yourself, are you open to working with other musicians or do you prefer to work solo?

For the writing process I prefer to work alone The album will be recorded with a drummer and a couple of guest musicians. My solo guitar abilities have definitely reached their limit. And if I find enough time and the right people, I’d love to hit the stage.

7.The ep was released on 'Witching Hour Productions', how did you get in contact with this label?

I’ve been knowing them for a while because of their work for Vader and Helheim and their huge distro. So I gave it a shot and contacted Bart and he was immediately interested in my stuff. The upcoming album will also be released by them and I’m really grateful for their work.

8.On a worldwide level how has the reaction been to your music by fans of black and thrash metal?

Mainly positive. Of course you always have people complaining about it, that it’s not true enough, the sound isn’t right and whatever. But that’s how it is, fuck ‘em.

9.Are you also involved with any other bands or musical projects?

I’m writing the debut albums for Order of Ištar and Rheingold and the first demo for Ad Victoriam right now. I’m also still working on new stuff for Der Toten Lebend Schein. All of these are more or less black metal projects. My focus is on the Golden Blood album though.

10.When can we expect a full length and also where do you see yourself heading into as a musician during the future?

The drum recordings will begin as soon as the quarantine restrictions here in Europe are eased. I plan to finish the album in summer. There are plans of playing live, but I cannot promise anything right now.

Midnight, Deströyer 666 or Inculter are a huge influence. But also bands like Helloween, Mystic Prophecy, Primal Fear or the 90s punk bands on Fatwreck Chords. Lately I’ve been listening to a lot of Savage Grace, Sortilége and Glacier. I don’t really observe the scene right now, so mostly I just discover gems from the 80s I didn’t know about.

12.Does Satanism or Occultism play any role in your music?

Yes. Both are pillars of our existence, so they are also the inspiration for everything I do.

Bandcamp
Posted by OccultBlackMetal at 1:02 AM No comments: 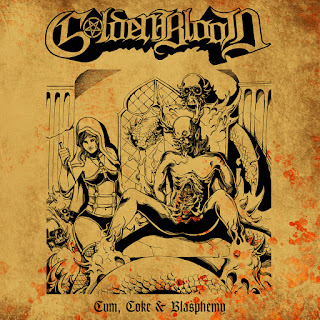 https://witchinghourproductions.bandcamp.com/album/cum-coke-blasphemy
Posted by OccultBlackMetal at 11:30 PM No comments: