1.For those that have never heard of you before can you tell us a little bit about the band?
Indoctrine is a metal band from Seinäjoki, Finland. Our music could be described as melodic death metal though our approach to the genre involves more black metal elements than most bands’ do. Indoctrine was founded in early 2012.


2.In 2013 you put out both a demo and ep, can you tell us a little bit more about the musical sound of both recordings and also how do they differ fromeach other?
Both of our albums were recorded at the same studio, so the recording process went down pretty much the same way. Between the two recordings, we acquired some new hardware and paid more attention to the sound in general, which can hopefully be heard in favor of ‘Unto the Fall’.


3.Can you tell us a little bit more about the lyrical topics the band explores with the music?
Most of our lyrical aspects are influenced by religions in general. Some have interpreted our lyrics as anti-religious or anti-christian, but I (Matti) consider my writings to be more criticizing than offending.


4.What is the meaning and inspiration behind the name 'Indoctrine'?
We wanted to come up with a name that appears suitable for our musical style, reflects our lyrical themes and first of all, points to our band when looked up in search engines. The name is supposed to mean anti-doctrine in some grammatically incorrect-ish way.


5.What are some of the best shows that the band has played so far and also how would you describe your stage performance?
All the shows have been great so far! But to mention a few: Bar15 in Seinäjoki, El Gringo in Vaasa, O’Hara’s in Tampere and Selviytyjät Private Metal Fest in Jalasjärvi.


6.Do you have any touring or show plans scheduled for the new year?
We have a couple of gigs coming up. The one that we are the most excited about is our performance on the 8th of February as a support act for Finntroll in Rytmikorjaamo, Seinäjoki. Also, we will pop in Hyvinkää on the 28th of February.


7.On a worldwide level how has the feedback been to your music by fans of melodic death metal?
Actually,  we haven’t received much feedback from melo-death fans in particular. Now that you asked, I think we should find out their opinion! Feedback from reviewers has been mostly surprisingly positive.


8.According to the Metal Archives page some of the band members also participate in other musical projects, can you tell us a little bit more about them?
Juho and Anssi play in a death metal band called Defiled Icon which has been around since 2010 or so. Defiled Icon is mostly groovy / mid-tempo death metal. Despite the name, lyrics are in Finnish.
Juho is also a part of Deathkin, a black metal band located in Tampere. Since he’s been in the band for less than a year now, his contribution to the band’s compositions is yet unheard in current recordings. Deathkin is very dynamic black metal band as it’s music vary between fast, technical and atmospheric parts. The band has a bunch of new songs ready and is planning to enter the studio during this spring.
Tomi plays also in a band called Trespassenger which was founded back in 2000. They play modern metal seasoned with alternative rock and grunge.


9.When can we expect a full length and what direction will it be taking music wise?
Most likely we will keep pretty much same direction we have on Unto the Fall. From the beginning our mission has been to make music that merges melodic death metal into black and thrash metal in a melodic way. We think we succeeded doing that on Unto the Fall.


10.What are some bands or musical styles that have had an influence on your music and also what are you listening to nowadays?
Matti: I myself have always been a fan of good old swedish melodeath: At the Gates, Dark Tranquillity, you name it!
Juho: I would say bands like At the Gates, Primordial, Exodus, The Haunted and Dark Funeral have had some sort of an influence in my compositions.


11.Do you have any non musical interests?
As in hobbies other than music? If so, our group in general has interests towards photography and video games for instance.


12.Before we wrap up this interview, do you have any final words or thoughts?
Everyone reading this: follow our Facebook page, listen to us on Bandcamp, look up our videos on YouTube and vote us to play in SteelFest 2014 (the button saying ‘Äänestä tätä’ meaning ‘Vote this’): http://demoni.steelfest.fi/Band.aspx?band=23
Greetings, Anssi/ Indoctrine

Posted by OccultBlackMetal at 7:30 PM No comments: 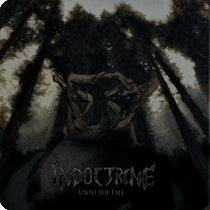 Song  lyrics  cover  dark  and  philosophical  themes,  while  the  production  has  a  very  strong,  powerful,  heavy  and  professional  sound  where  you  can  hear  all  of  the  musical  instruments  that  are  present  on  this  recording.

Posted by OccultBlackMetal at 7:48 PM No comments: