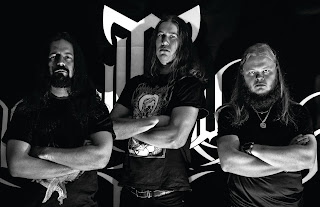 As you know, our debut album will be released in February 8th, and the band's activity is currently centered on that. We're rehearsing songs, planning a new album to be recorded some time in the future, as well as recording one song later in February. Currently we don't have a bassist, so we're looking for one.

2.You have an album coming out in February, how would you describe the musical sound that is presented on the recording and also how does it differ from the demo you had released in 2013?

Celestial Decadence balances dark and aggressive elements of death and black metal with more philosphical and introspective aspects. It's definitely a continuation of the same sound as heard on the demo, though the new album is more intense and aggressive on the whole, and the calmer and more melodic parts are more subtle and strongly embedded into the overall atmosphere.

3.the band has been around since 2009 but so far have only released a demo and a full length, can you tell us a little bit more about the gaps in between releases?

When we founded the band in 2009, we were still only learning to play our instruments. Though we did record some material between 2009 and 2013, it wasn't good enough to warrant a proper release. Recording is expensive and time-consuming, and it's not for the shortage of material or rehearsing that we don't release more material. We're determined to release music quite frequently in the future, though - it's one of my major goals with this band to release a whole bunch of (great) albums.

The lyrics explore various existential and religious themes. It's about the decay of faith in the modern world, and the lyrics portray different forms of faithful insanity, be it savagely violent, intellectually pathetic, or warlike and dangerous in an ordered way. Celestial Decadence refers to the lavisciousness of religion and the decadent monuments build in its celebration, as well as the degeneration and loss of meaning of faith. Religion, Abrahamic particularly, is becoming increasingly anachronistic in our age, and we are left less and less excuses for our barbarism, and more incentive for rational and humanistic ways of governing our world.

5.What is the meaning and inspiration behind the name 'Illusions Dead?

It simply means disillusionment. Incidentally, it fits the concept of Celestial Decadence quite conveniently - if you look at it from a religious point of view.

In my opinion, the best show we've played was at Lepakkomies in August, together with Cauldron of Hate and God Disease. The audience was fantastic, and it was a real joy.

When performing our music, I want to express the passion I have for the music we play and the themes that go with the music. Some bands are really good with entertaining banter between the songs, but we don't do that much.

No. If an opportunity arises, we are willing.

No, but we are open to possibilities  if the opportunity presents itself.

We received a very positive review from Metal Observer, and some people who have received the promo have even told me personally that they liked the album very much, so I'd say the reception has been great so far!

I am involved in an international death/doom band called Gloaming. We made an album last year called Keep Close the Watchfires. The others aren't currently in any bands other than Illusions Dead.

Constant evolution. Finding and capitalising our strengths, exploring styles and expressing ourselves musically. I always want to make the kind of music that I wish there was more of, and I also deeply enjoy playing the sort of music that inspires me personally. Our style will evolve constantly, but that genuineness and inspiration will never change.

Actually, we're influenced by a rather massive amount of bands, including Gorgoroth, Dissection, Insomnium, as well as some NYDM like Immolation, just to mention some major influences. It's a coctail of different styles that we combine into an entity of its own. I'd say that it comes very intuitively to us. Lately I've been on a big At the Gates kick, especially the first two albums. I've also binged on the first two Todtgelichter albums, which are really good German black metal. That band had a very interesting ability to invoke passion, drama and intensity with their music. It's extremely emotional, and yet still a deadly barrage of black metal. It's similar to what I'm listening right now, actually, which is the new Der Weg einer Freiheit album - also German black metal. Great stuff!

Reading, writing, good food and drink in the company of good friends.

Thanks for letting us share our music, and thanks for the interview as well!

https://www.youtube.com/watch?v=BRdmov1KjIg
Posted by OccultBlackMetal at 1:49 PM No comments: 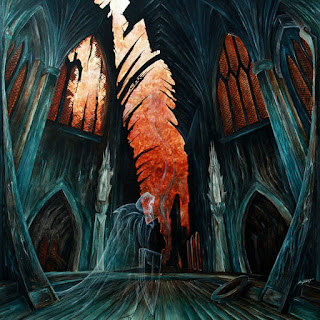 Illusions  Dead  plays a  musical  style  that  takes  melodic  black  metal  and  mixes  it  in  with  blackened  death  metal  to  create  a  style  of t heir  own,  the  production  sounds  very  professional  for  being  a  self  released  recording  while  the  lyrics  cover  death,  anti  religion,  fantasy  and  history  themes.