1. Can you tell us a little bit about the band for those that have never heard of you before?
We're from a town called Rouyn-Noranda in northern Quebec which is Canada's Metal Capital. We've been together for 8 years now and got 2 albums; Vitium Intus, 2006 and Them, 2009. Available through Century Media Distro. We've been active on Canada's metal scene since 2006 and are about to invade the U.S.

2. How would you describe your musical sound?
We are a Blackened Death Metal band. We have a melodic black metal side as well as a technical death metal side. We've always been fan of both styles as long as it is extreme! We've been working with the Man behind Despised Icon and Beneath the Massacre's sound: Yannick St-Amand. He as always been a death metal sound man but he bought that sound to us which gave a life to our music and we think people deserve to have a good productions in their ears.

3. What is the meaning behind the band's name?
The Cryptik Howling is that voice inside all of us, telling you everything is wrong. It is that demon whispering at your ear. It is that part of you which is trying to take over control of yourself. It is our voice...

4. What are some of the best live shows that the band has done so far and how would you describe your stage performance?
There was the Black Metal Mayhem in Montreal in the beginning of 2009. The FME festival in Rouyn-Noranda and we also played at the Trois-Rivières MetalFest IX which is Quebec's biggest metal event.
Here are 2 links to memorable shows:
Vitium Intus album launch in Rouyn-Noranda, june 10th 2006; http://www.youtube.com/watch?v=aHBkXOqr_4I
Trois-Rivières MetalFest IX in Trois-Rivières, november 14th 2009; http://www.youtube.com/watch?v=aY8dmtaHe9k

5. Do you have any touring plans for the future?
Yes, we didn't played a lot of shows for the first part of 2010 due to drummers issues but we will be able to tour Quebec and Ontario this fall. We are constantly looking for shows. We are looking foward to tour Canada and the U.S. in 2011.

6. I noticed that the new album came out from Cyrogenic Records, how has the support been from that label so far and what are some other bands that are on this label?
Cryogenic Records is a friend of us. He is the promoter in Rouyn-Noranda as well as the label owner of the place. His support was of a good help to us. He helped us out to release our 2 first album through his distributors. But now we are on our own and we are looking for a label which could give us a greater support.

7. Do you have any current side projects, if so who are they and what kind of music do they play?
Emmanuel Audet on bass got a band called Black Empire, it is raw extreme black metal, I love it. But it is so damn true that they don't even have a myspace.

8. How would you describe the lyrical content of the music?
We've been using themes of horrors, philosophy, superstitions, occultism, etc.. We are talking about humanity's madness, the very true nature of evil which is inside of each and everyone of us. Humanity have always been claiming the presence of Evil but never understood that IT is this Evil presence.

9. How has the feedback been to your music so far by extreme metal fans worldwide?
The feedback is greater than expected in the beginning. For V.I. we had a good feedback but for Them it is amazing. Unfortunately I don't have all the time I'd like to spend on the promotion of the band. That's why we would need a label to give us some back up.

10. What are some bands or musical styles that have influenced your sound and what are you listening to nowadays?
We have offenly been compared to Dimmu Borgir which was our first common influence in the beginning but we use to listen to everything extreme from Death to Black Metal. nowadays we are listening to Behemoth, Belphegor, Marduk, Satyricon, Dark Funeral, etc...

11. Does the band have any interest in Occultism, Satanism or any forms of philosophy?
We have a lot of philosophic discussions together but we are not into a specific spiritual journey together

12. How would you describe the extreme metal scene in the part of Canada that you live in?
Rouyn-Noranda is Canada's Metal Capital. It is located far in the Northern Quebec and has 50 000 people but there is between 300 to 500 people sowing up at EVERY metal show !!

13. What are some of your interests outside of music?
We don't have a lot of interest outside music, we live for metal !

14. Any final words or thoughts?
Thanks a lot for this interview. I'd like to invite to our new myspace at
www.myspace.com/cryptikhowling
We hope to see you all in tour soon !
Stay Metal !
Posted by OccultBlackMetal at 5:43 AM No comments: 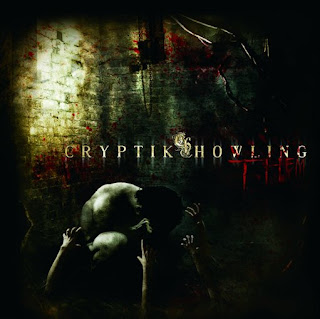 Cryptik Howling are a melodic and  symphonic black metal band from Canada and this is a review of their 2009 album "Them" which was released by Cyrogenic Records.

Drums alternate between slow to mid paced drumming with some fast playing and blast beats being utilized at times, while the keyboards are very symphonic sounding and have a movie soundtrack feel, as for the bass playing it has a dark tone that follows the riffs that are coming out of the guitars.

Rhythm guitars are mostly mid paced to fast black metal riffing that is very melodic and has a small amount of a death metal edge to them, while the lead guitars are very melodic sounding solos that are heavily influenced by some of the better known symphonic black metal bands.

Vocals are mostly high pitched black metal screams with some deep death metal growls being used on occasion, while the lyrics touch on philosophy and hatred with a small amount of ritualistic subjects, as for the production it sounds very professional and you can hear all of the instruments that are present on this album.

In my opinion Cryptik Howling are a good band and even though this is not the most original album this band seems to understand the best elements of symphonic black metal and this sounds more like those bands before they sold out, if you are a fan of early symphonic/melodic black metal you should check this band out. RECOMMENDED TRACKS INCLUDE "Grievous" "Ritual" "The Dark Figure" and "Ruins". RECOMMENDED BUY.

Posted by OccultBlackMetal at 1:06 PM No comments: