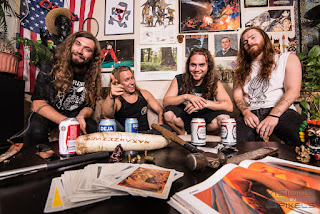 
We play our own songs and prefer to write them together as a collective, but sometimes apart also. Our songs typically have lots of parts and at sometime end…usually. Geoff gets an itchy mouth when he eats apples and 3/4 of the band are not circumcised


2.So far you have released 2 full length's and an ep, how would you describe the musical sound that is presented on the recordings and also how do they differ from each other?


There is some sort of cohesiveness between all of the albums, something that makes them all very “Bushwhacker”. The first album is very thrash rooted with an added psychedelic twist. Fish guy is something of a bridge between the gap of the 1st and 2nd full lengths. Still maintaining a psychedelic edge, Fish Guy ventures into a more extreme and technical sound. The latest record, The False Dilemma is a lot more aggressive and dark, showcasing the impact the move from Yukon to Vancouver had on the band, now being immersed in a thriving metal scene.


Lyrically this album explores the relationships between individual inner struggles/conflicts and how they are a microcosm of society’s conflicts at large.


4.Originally the band was known as 'Minotaur' what was the cause of the new change and also the meaning and inspiration behind the name ‘Bushwhacker'?


At the age of 15 when we first started the band, we strived to have a very fierce metal sounding name and “Minotaur” seemed to do the trick. Soon realizing that there are 100’s of metal bands all over the world with that same name, we figured a change was necessary. “Bushwhacker” not only represents our home of the Yukon, but reflects our mentality of going against the grain and forging ones own path.


Recently we have opened up for bigger acts such as Kylesa and Cult of Luna here in Vancouver and can safely say that those have been a couple of our biggest shows to date. One of our most memorable shows was the Atlin Music Festival in northern BC prior to us moving south to Vancouver. Being the only metal band to ever play a major folk music festival on a big stage in front of hippies and families we remember it as a very fun and interesting experience.


We have our record release show here in Vancouver at the Astoria with locals ASTRAKHAN, THE HALLOWED CATHARSIS & SEER onMarch 5th. Following that there is talk of doing a stint of western Canadian dates. Aside from that we have no big touring plans until the summer of 2017 as we have plans to be back in the studio very very soon.


With the music industry constantly changing it would depend on any given label and what they are offering. As of this time we have not received any serious offers.


8.On a worldwide level how has the feedback been to your music by fans of extreme and prog metal?


People in both Russia and Norway have purchased albums so that has got to count for something.


We are currently writing new material that is bringing out the psychedelic and progressive rock elements in a much more refined way.


Ranging from classic metal heroes to avant garde mystics and riff wizards, we also have the guts to say that we have a soft spot for tastefully done country, pop, and electronic types of music. We think keeping an open mind to all types of music really keeps the creativity fresh and original. Some of our all time favourites to mention are:


Some of our non musical interests include:

Philosophy, Science, Psychology, and the Occult.


12.Before we wrap up this interview do you have any final words or thoughts?


We are out of milk, so coffee is going to fucking suck tomorrow.
https://bushwhackeryukon.bandcamp.com/album/the-false-dilemma

Posted by OccultBlackMetal at 2:57 PM No comments: 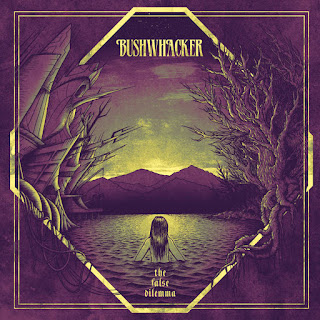 Spoken  word  samples  start  off  the  album  before  going  into  a  more  heavier  and  progressive  metal  direction t hat  also  introduces  black  metal  screams  onto  the  recording  and  all  of  the  musical instruments  have  a  very  powerful  sound  to  them  while  the  leads  and  solo  also  bring  more  of  a  melodic  style  to  the  recording.

Bushwhacker  plays  a  musical  style  that  takes  prog  metal  and  mixes  it  with  melodic  black  and  death  metal  to  create  something  very  original,  the  production  sounds  very  professional  for  being  as  self  released  recording  while  the  lyrics  cover  the  mind,  reality,  war,  mankind  and  the  apocalypse.