1,For those that have never heard of you before, can you tell us a little bit about the band?

Bethledeign was started by guitarists Phil King and Dan Lazaroff in 2001, joined shortly thereafter by Ron Sirott on drums. They filled out a proper lineup and released the EP An Iliad of Woes in 2003, it featured material in the vein of melodic Swedish death metal with elements of black metal. After a couple lineup changes (Dave Schmidt coming in on vocals and Chris Fleming on bass), a three song demo was recorded in 2004, but never properly released. Those songs were much darker and more mature sounding, treading more solidly into death metal territory. Phil moved out of state shortly after it was recorded, and I (Tony Petrocelly) auditioned and took his place. As we started writing material, I brought a much more straightforward, less melodic approach. We wound up with five new songs which we started recording, but the band split up before the sessions were complete.

2.Your first full length is coming out in December, musically how does it differ from the stuff you have released in the past?

Structure-wise, aside from some small adjustments I made to them, they are the same songs as they were back in the day; the big difference is just that they're properly recorded. The lineup is different, and so the new players bring their own style to the songs which really bring them to life. I played guitar on the album, but took over bass and vocal duties as well. Gus Barr from the Arizona death metal band Lago helped out with lead guitar, and Giulio Galati from Hideous Divinity drummed on the album; their contributions are absolutely incredible.

3.The band has been split up since 2005 with the band members focusing on other projects, what was the decision behind reforming the band?

The intent of creating my main band Construct of Lethe was to have a way to record and release the songs I'd written for previous bands. Bethledeign sadly shared the same fate as a couple other bands--I'd write an album, and the band would split up before we could record. Construct of Lethe became its own entity and started heading in a very different direction though, so I felt releasing old material under that name would just serve to confuse people. I've always wanted to release the Bethledeign songs, my love for them never waned. I had some downtime in between recording bands in my studio, so I got a hold of Phil to ask for his blessing to re-record the songs he had written, in addition to just the songs I had a part in writing...just something to do for fun to kill time. He not only encouraged that, he told me to release it as Bethledeign, which I hadn't even considered, that was really the start of it getting serious.

4.What are some of the lyrical topics and subjects the band explores with the newer music and also how would you describe your progress as songwriters over the years?

Dave Schmidt was the lyricist for this group of songs, his lyrics tend to be very anti-religious, with a focus on themes of demonology, christian esoterica, suicide, chaos and death. It's actually pretty interesting to delve back into these early lyrics of his, because as he wrote more and more for Xaoc (the band he and I started to continue on with the material we were writing when Bethledeign broke up) and on into Construct of Lethe, his words got much more learned and inscrutable, not to mention impossibly macabre. His lyrics on this album, just like our music, are a snapshot of a time that served as a crucial stepping stone in our development as musicians.

5.What is the meaning and inspiration behind the name 'Bethledeign'?

I know that Bethledeign is an anagram for "The Bleeding." Whether or not that was intentional, or what the meaning is, I honestly don't know...I joined the band after it was named. It feels like it means something and it sounds cool, so it works for me.

Kishor Haulenbeek painted it. I don't remember how I came to see his work, but when I first saw it I was blown away. I reached out to him and we talked about art and artists for quite a while; I told him I didn't want a stereotypical metal album cover, so no trite gore/satan/creepy landscape crap. We agreed to use the title Iconography of Suffering literally; he came up with the specific idea and sketched it up, I thought it was brilliant. If you follow from the figure's right hand up and over to his left, you see a crucifixion nail, medieval torture tools, up through modern day capital punishment...suffering through the ages.

7.Are the band members open to doing live shows again in the future?

It's fun to think about, but at the end of the day, this is a passion project. We all live so far apart from one another and have so much going on in our lives that even though the spirits are willing, it's just not feasible.

8.The new album is coming out on 'Edgewood Arsenal Records,' can you tell us a little bit more about this label?

I created Edgewood Arsenal Records as a way to get my projects out in the open. Our first 4 releases were pressed on CD (Construct of Lethe, Pain Tank, Grethor, Turbo Shokk), but subsequent releases will likely be digital only. It's an incredible amount of work creating an album--from writing it to recording it, mixing, creating the art/layout, promotion, etc...and that's on top of paying for it all out of pocket. It's really a losing game if you do it for any reason other than the love of creation.

9.On a worldwide level how has the reaction been to your music by fans of extreme metal?

Bethledeign made a decent-sized dent in the local scene back in the day, but that was before getting national/international exposure was an easy, realistic thing. As for this new material, we're trying to get the word out as we speak, but so far the reaction has gladly been nothing but positive. I know that releasing an album like this flies in the face of what's going on in the metal world at large, but I'm hoping that it resonates with people who are maybe sick of bands trying to be the most brutal, most tech, most guttural, fastest, etc.

I've got a thrash band that recorded an EP that's getting close to release, I'll be working on the 2nd (already written) Bethledeign album in 2020, as well as a remix/re-release of Construct of Lethe's debut album Corpsegod. Gus has Lago as well as a death metal band called Detritus, both incredible bands. Giulio stays busy with the god-tier Hideous Divinity.

11.Is there any plans for future releases?

There's an 8 song album we wrote under the name Xaoc after Bethledeign originally broke up, I intend to record that and release it as the 2nd Bethledeign album in 2020.

The rhythm playing of James Hetfield and Scott Ian are probably the biggest direct inspiration for my guitar playing technique, but not necessarily writing. People tend to say my riff writing is most similar to Morbid Angel, and while it isn't really intentional, it makes sense because they are one of my all time favorites. As for what I'm listening to now, honestly it's a lot of Rollins Band, Hall and Oates, Jeff Buckley and Elton John. Not much metal because that's what I'm soaking in year-round in the studio.

I built a studio in my house, Trepan Studios, which I opened up to outside bands a couple years ago; it's what takes up the vast majority of my free time, so even when I'm not playing it, I'm recording/mixing/mastering it for other bands. I've been drawing as long as I can remember, so illustration always has a spot in my heart, though I don't do it much anymore. Something I did for the first time last year that really surprised me was a 10 mile mountain hike. I wasn't expecting to like it, but I really did. I have never been a real outdoorsy person, but there was something about it that really struck me.

Thanks for the interest in Bethledeign, I wish it was a less convoluted story to tell, haha. I'm really happy to finally get these songs out there, and hope others dig what we've done. Thanks again!

SoundClick
Posted by OccultBlackMetal at 8:54 PM No comments: 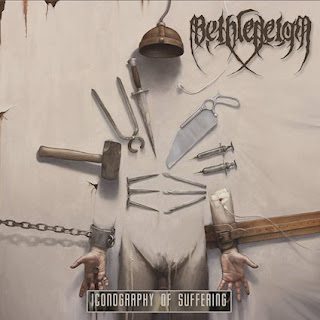 Bethledeign  plays  a  style  of  blackened  death  metal  that  is  very  brutal  and  melodic  sounding.  The  production  sounds  very  professional  for  being  a  self  released  recording  while  the  lyrics  cover  evil  and  chaos  themes.

https://www.metal-archives.com/bands/Bethledeign/12654
Posted by OccultBlackMetal at 3:07 PM No comments: