1.Can you give us an update on what has been going on with the band since the recording and release of the new album?
Since we finished the recording of ‘The Ghost Eater’ we have been focusing on bringing our live performance up to speed. Besides rehearsing the songs, I was also planning the album release and sorting out any band logistics that are part of any band’s album release! Now that the album is finally out, we’ve been focusing more on rehearsals and looking into booking some shows.

2.Recently you have released a new album what are some of the things you feel you have done different musically with this release not you where not able to do on pat recordings?
This album is different to our previous album ‘Frame of Mind’ as I have approached the song-writing in a different way and have explored other areas of the metal genre. In this album you will hear a few more progressive and technical elements which were not so evident in our previous release. On the other hand, this time around we have not included orchestral elements in our songs as we have done in the past, as I feel they wouldn’t fit well in these songs.

3.The band took a 2 year hiatus can you tell us a little bit more about it what?
The band went on hiatus 2 years ago and the future of the band was a bit uncertain. The other members at the time are not part of the band now and so the line-up had to be built again. This took some time and during that time I also focused on writing music for a new album.

4.What are some of the lyrical topics and subjects the band explores with the newer music?
The lyrical concept behind the songs is largely represented through the name of the album ‘The Ghost Eater’. The main essence is about facing your fears and not letting one’s ghosts get the better of him or her. To rise above everything bringing you down and take control of your fears, in simple terms. Each song interprets this meaning in its own way while also letting listeners interpret their meaning in their own way.

5.What is the meaning and inspiration behind the name 'Stormcast'?
The name came about when we were young and I guess we thought the name sounded cool at the time haha! While that is largely true, I’m happy we chose that name at the time as I like to think that the band’s music is made up of a small ‘chaos’ (or a storm!) in itself and we want to cast that onto others and make them feel what our music makes us feel.

6.Can you tell us a little bit more about the artwork that is presented on the new album cover?
We worked with this very talented artist called Lenore (Ani Artworks) who designed the artwork of the whole album. The artwork is based on the name ‘The Ghost Eater’ and I wanted to represent that through some dynamic imagery. I wanted it to be bold and impactful, dark but elegant. Lenore perfectly grasped the concept I was going for and made the artwork ‘match’ the aesthetic of the music in such a great way. I’m extremely pleased with how it turned out!

7.What are some of the best shows that the band has played over the years and also how would you describe your stage performance?
Anyone who has ever seen us live knows that we put on a great live performance and we give it our all every time – and that’s true. I hate seeing a band playing live and seeing them look bored and not feeling their own music, it’s such a huge anti-climax and a shame really. We always try our best to put on a good show because, at the end of the day, it’s a SHOW! Without a doubt, our best show we played is MetalDays festival in 2013 in Slovenia. Although it was at 12:30 noon and raining, the energy we got from playing on a huge stage at a big festival was indescribable and our performance that day was most probably our best to date. Another notable gig was our album release show – the venue was packed and we had a great time celebrating our release…good times!

8.Do you have any touring or show plans for the new album?
For the moment we aren’t focusing on booking a tour in the near future but will most certainly start booking a few UK shows. Touring isn’t completely out of the picture, I’d just like to get some live experience with the new line-up first before we can take this to an audience outside of where we are based. Things will be a bit more clean in the next few months!

9.Currently the band is unsigned but has worked with a label before in the past, would you be open to working with another label again in the future?
Only if the opportunity is completely worth it. A DIY band can do a lot for itself nowadays with the use endless tools the internet offers if they put the work and effort into it. With certain labels the benefits are obvious and worth considering, but at the moment I am happy to be a DIY band.

10.On a worldwide level how has the reaction been to your newer music by fans of black and extreme metal?
We’ve gained some good following from scattered places around the world and receive messages supporting us which is a lovely feeling and we appreciate it hugely. I haven’t picked up on a certain influx of attention from black metal fans specifically, as I don’t really consider our music to have many black metal elements, but fans of different metal genres have a expressed a liking to our music which I think is great as we can appeal to various types of fans.

11.Where do you see the band heading into musically during the future?
It’s really hard to say at this point as we are solely focusing on ‘The Ghost Eater’ and haven’t written any material for the future yet. One thing is for certain, the musical direction will not be entirely the same as our previous work as I like to explore different influences when writing music…nobody knows really!

12.What are some of the bands or musical styles that have had an influence on your newer music and also what are you listening to nowadays?
When someone asks me what kind of music does Stormcast play I answer, “Well, something between the style of Opeth, Rotting Christ, Gojira and Porcupine Tree…but not exactly!”. Those bands have been a huge inspiration for me over the past years and it was inevitable they would influence my songwriting…I have been listening to a bit more ‘proggier’ styles over the past couple of years and it has creeped in to my songwriting, but the recent album still does contain that main ‘Stormcast’ sound to it. I like exploring other music as well though, I’ve been listening to the alt-rock band Arcane Roots a lot for the past year or so, they’re a UK band and incorporated a lot of cool electronic elements on their last record – extremely creative stuff, highly recommended to anyone.

13.What are some of your non musical interests?
I watch a lot of movies and Netflix series! I’m currently watching the series Vikings which is pretty good. Apart from that I’m interested in Digital Marketing and is also what I do in my day job…I also like to exercise often and cook quite a lot…and travelling to new places whenever I get the chance!

14.Before we wrap up this interview, do you have any final words or thoughts?
I’d just like to say thank you to everyone who has supported Stormcast up to now, it’s been a huge help and encouragement for the band to continue strong and make great music. Also thank you to you for taking the time to have a chat about the band and our album! I hope you enjoy it! 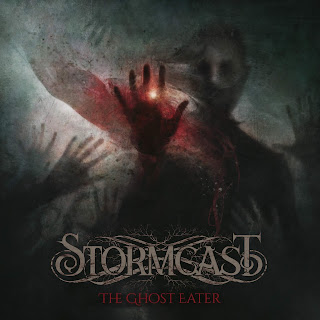 Stormcast  plays  a  musical  style  that  takes  the  melodic  and  atmospheric  sides  of  black  and  death  metal  and  mixes  them  together  to  create  a  sound  of  their  own,  the  production  sounds  very  professional  while  the  lyrics  cover  feelings,  corruption,  nature  and  anger  themes.

https://www.facebook.com/stormcastband/
Posted by OccultBlackMetal at 8:40 PM No comments: