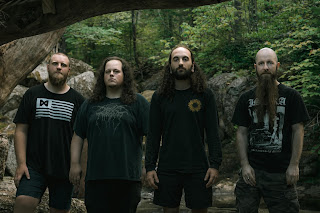 We’re Ancient Thrones from the east coast of Canada in Halifax, Nova Scotia. We play our own brand of blackened death metal with a desire for drowning our listeners in cosmic anguish. If you push play, prepare for a grand sonic journey into the depths of the void that is purgatory.

2.You have your first full length coming out in November, musically how does it differ from your previous ep?

Under our old name Abysseral Throne we had released an EP called “Storming the Black Gate”, which we cherish as a learning process for the band. The band today is vastly different with new members and no more clean singing. Dylan our guitarist and main songwriter has a lot more ideas and boundaries he’s looking to push than we did previously. With the line-up change came the desire to showcase more extreme music to match my blackened shrieks and guttural growls.

3.This is also your first released in 4 years, can you tell us a little bit more about what has been going on during that time frame?

To be honest, a lot of things that were out of our hands prevented this release from coming sooner. Putting out this record has been a slow process, but good things take time, so they say. We wrote the album skeleton in 3 months, then I really planned and took my time with the lyrics. I moved across the country for a little bit to clear my head and to isolate myself to finish the lyrics and story. It was very therapeutic for me to take a break from the heavy subject matter. Once I returned to Halifax, we began recording in the winter of 2019. It’s been grueling to get to where we are today, but we’re excited for everyone to finally hear the record on November 6th!

4.The lyrics on the new recording are also a concept album, can you tell us a little bit more about the story you have covered with this release?

It’s a story of pain and loss and overcoming yourself to move forward in life. Sometimes we are in the way of our own happiness and we must dissolve our own attachment to pain to see the light. There’s a lot of metaphors lying within each song, but narratively it’s the journey of a dead man finding peace with his reality and how he’s able to reach acceptance. I was in a very hard place in my life while I was writing the lyrics, and stuck right in the middle of a painful grieving process myself, so I really wanted the record to follow the 5 stages of grief most people go through to find that acceptance. If it helps just one person going through a tough time, I’ve done my job as a writer.

5.What is the meaning and inspiration behind the name 'Ancient Thrones'?

I went through a few different names before landing on Ancient Thrones. Abyssal Throne, Abysmal Throne. We knew we wanted to keep our initials and not distance ourselves completely from Abysseral Throne. Shortly after I was listening to one of my favorite songs from Wolves in the Throne Room called “Astral Blood” and one of the lyrics mentions “Ancient Thrones”. It was just the sign I needed.

I really wanted a strong visual landscape for the record with no logos or words, and I wanted something that could exist in the universe outside the album, like a glance of what could be happening in our world, while the character of the record is dead. The veiled woman in the water represents the grief we feel, but also represents the character of death in the album. I wanted this figure in a place that was not only beautiful and vibrant but one I had a personal connection to. We shot the cover near a waterfall called Crooked Creek, just outside my hometown in New Brunswick and our friend Mallory geared up and got in that freezing cold river. The emerald green water also plays a strong metaphorical role in the record.

We love to demolish our audience with crushing guitars, blazing drums, and well thought out tones. I love to see people's faces when we’re done playing, especially when people are surprised that I’m able to drum and do vocals at the same time. We’ve shared the stage with Beyond Creation, The Faceless, Rings of Saturn. Some of the best shows we play are right here in our city, in front of the always hungry east coast crowds.

8.Currently you are unsigned, are you looking for a label or received any interest?

We’d love to talk to a label and we’ve never had any real serious talks before. I feel like it’s only a matter of time before someone hears what we’re doing and wants to work with us. We’re definitely open to having a discussion with the right person.

Reception for the record so far has been stellar, and I’m glad people are making their own interpretations of the material. We really like to dance on the edge of both black metal and death metal, so it’s fun seeing fans trying to lock down our sound.

With COVID-19, it’s hard to say right now. I hope we’ll be back to touring soon. What I can tell you is we are working on our follow-up record right now, and we should be back in the studio next year if all goes as planned.

Skeletonwitch and that blackened thrash sound has been very influential to me, as well as Wolves in the Throne Room, more so for the atmosphere they create. I find I’m able to pull a lot from the listening experience they create. I’ve been listening to the new Phoebe Bridger’s record, “Punisher” on repeat, I think she brings a beautiful darkness for her listener to inhabit while she also mends the soul with her tender voice. I also just got really into Vale of Pnath, who like us have a blackened sound but it’s mixed with a more tech-death style, which is a totally deadly combination.

We’re Ancient Thrones from Canada and we’re here to bring you cosmic anguish. Our new concept record “The Veil” is arriving on November 6th to all digital streaming platforms and is also for sale on our Bandcamp  https://ancientthrones.bandcamp.com/.. You can pre-order it now. If you’re a fan of metal in any variety, take the journey with us and welcome the void of oblivion into your soul. Thank you for having us and for these well thought out questions, it was a pleasure speaking with you.

Posted by OccultBlackMetal at 2:56 PM No comments: 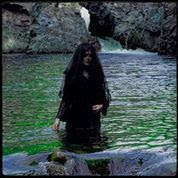