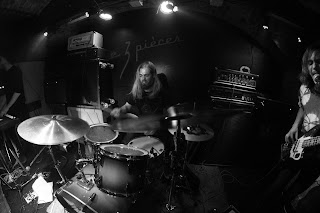 We recorded this album 2 years ago, we are currently composing new songs.
Now we are a four-piece band, it changes a lot of things, so we are working with this new line up and booking couple of good gigs for the next months

There is also something really cool, we are working on with friends on a new concept for us, two bands writing an album together.

It's hard to precisely describe, it's a huge evolution on many aspects, but we think about it as a continuity of the first album. We also made a big work to find new sounds and textures. All those researches led us to different atmospheres.


3.What are some of the lyrical topics and subjects the band explores with the newer music?

The lyrics were written the same way on this album than they were on the first. It's always related to personal subjects, like an introspection treated in a metaphoric way.
The topics evolve in the same time than we do.

4.What is the meaning and inspiration behind the name 'Greyfell'?

The name Greyfell comes from the Nordic mythology, it's one of the different universe that we draw inspiration from.


Our trip to Tel Aviv and Jerusalem was a great adventure. Playing at the Motocultor festival this summer was massive. We also had a lot of good memories during some « wild » tours across Europe.
And about the stage performance, I think you’d better ask this question to someone in the crowd :)

6.DO you have any touring or show plans for the new album?

We are working on a couple of mini tours in France for the release of the album.
We are talking about booking a European one this summer.

7.The new album was released on 'Argonauta Records' and 'Atypeek Music', are you happy with the duo support that they have given you so far?

Yes, it is new for us, we are very happy to release this album with two labels, It's great to have this collaboration supporting us, and it really makes this release happening in a good spirit.

8.On a worldwide level how has the feedback been to your music by fans of stoner, doom and black metal?

Our first album was relatively confidential.
This one has just been released so we have to wait a little more to have feedbacks.
I think we cross over different styles and inspirations so that many people can get in our music, whatever the scene or the predilection kind of music they like. Some people might think we are not enough in one style or another, but that is the way we like it.

That's sure that we will go on experimenting and digging all the time about what we create as a band. That's the way we do music. We will continue to multiply influences to stay in a constant evolution.

There are a lot of bands and musical scenes that influence us. It can be Kraut Rock, Death Metal or D-beat Punk, it depends of the mood. we listen to a lot of bands and I guess that they all have a part of influence in our music. This week I only listened to Leftover Crack and Booba’s latest album.

We are active within the Soza collective, who presents and broadcasts different forms of art and expression. We try to mix up every disciplines in a same way of apprehending things, the same spirit in different medias. It's a big part in our lives when we are not playing music.

We hope you will enjoy our new album.
Support your local scene.
We have a lot of friends who release music stuff through the Soza collective like The Sharkettes, MNNQNS, Elephants or Servo, go listen to them and support

Can't wait to tattoo my face myself with a sewing needle to make my mom cry.
Keep in touch in 2018 for the new stuff we are working on.

Posted by OccultBlackMetal at 9:27 PM No comments: 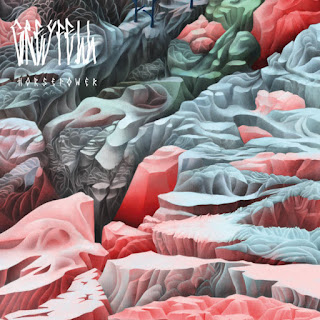 Atmospheric  drones  start  off  the  album  along  with  some  powerful  sounding  bass  guitars  a  few  seconds  later  while  the  riffs  also  use  a  great  amount  of  stoner  style  melodies  along  with  the  clean  vocals  bringing  in  more  of  a  traditional  doom  metal  feeling  as  well  as  the  songs  also  mixing  in  a  great  amount  of  psychedelic  elements.

Greyfell  plays  a  musical  styles  that  takes  black,  stoner.  doom  metal,  psychedelic  and  hardcore  and  mixes  them  together  to  create  a  sound  of  their  own,  the  production  sounds  very  professional  while  the  lyrics  cover  dark  themes.