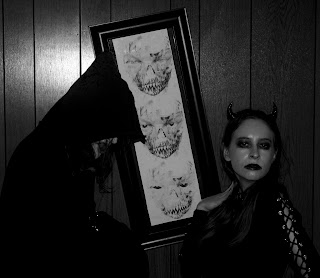 1.For those that have never heard of you before, can you tell us a little bit about the band?
Yes, we are a duo. Lord of Horns creates and records all of the music and Legion sings in various styles. We both contribute with lyrics and Legion focuses on our visual marketing.

2.Recently you have released a demo, can you tell us a little bit more about the musical style you went for on the recording?
We chose 3 songs that we felt displayed our talents and influences the best. It has a good mix of goth, black metal, ambient, and industrial. We were able to prominently display Legion's vocal capabilities, which is a key factor of our music.

3.You refer to your music as 'savage goth', can you tell us a little bit more about this term?
I came up with the term to describe our sound. We are a little too soft for metal and way too hard for traditional goth. I wanted a term that represented our sound as soon as you heard it. Metal in general and especially black metal is known to be savage sounding. Goth is more dreary and slower paced, but we use elements of each to attain our sound. I didn't want to go by 'goth metal' because that's still not exactly what we are doing. I really wanted something that represented our black metal influences, so I chose the word savage.

4.What are some of the lyrical topics and subjects the band explores with the music?
We have a range of topics that we enjoy writing about. They include, but not limited to, serial killers, dark fantasy/ mysticism, psychological torture, classic horror tropes, etc.

5.What is the meaning and inspiration behind the name 'Dark Reverence'?
We revere all that is dark, we live in a harsh world and we feel dark themes are more realistic and representative of life. For this project, we wanted to incorporate many different types of dark music that we each are influenced by. Some people like goth, or industrial, or thrash metal. We like it all, so long as it's dark sounding. It's also another take away from our black metal influences. Many bands are Dark this or Dark that. So, the name works well to promote our sound.

6.Currently there are only 2 members in the band, are you open to expanding your line up or do you prefer to remain a duo?
For the time, we are happy with how we work. We would love to share the stage with other musicians, but we don't want to compromise on our craft. I think if we are ever signed by a major record label, studio musicians would work best for us.

7.What are some of the best shows that the band has played so far and also how would you describe your stage performance?
So far we only had one show with a good turn out. We started slow and didn't promote much. Now we are promoting constantly. Our last show was the best, we opened for the Vampirefreak's monthly Cybertron event last month. For being an unknown opening band, we played for about 60 people, half of which we personally sold tickets to. Our stage performance is rather reserved. We wear hoods and have mysterious presences. That's the aesthetic we are going for.

8.Do you have any touring or show plans for the future?
We have 2 shows coming up next weekend. One is in Ardmore, PA at the Rusty Nail. That's a metal show. The night after we will be in Mystic Islands, NJ at the last Castle Corridors event. That's a goth dance event. In the summer we just got accepted to perform at Steampunk Fest. Before then, however, we want to do some weekend touring around the northeast region of the US to spread our name. We are thinking that would go from March-May

9.Currently you are unsigned, are you looking for a label or have received any interest?
We are still only 4 months old, so no interest has come to us. We aren't really looking for a label right now. We want to gain exposure first to make ourselves more marketable for bigger labels.

10.On a worldwide level how has the reaction been to your music by fans of black and goth metal?
We received a good amount of positive feedback by fans of those types of music. These are people I am friending on facebook and promoting to all over the world.

11.When can we expect a full length and also where do you see the band heading into musically during the future?
We want to do a few more demos first and then focus on getting a record or distribution deal. Once we have that we would be game to do a full length release.

12.What are some of the bands or musical styles that have had an influence on your music and also what are you listening to nowadays?
Legion enjoys traditional goth, industrial, and tribal; bands like Depeche Mode, Eisbrecher, Dead Can Dance, are just a few. I like a lot of styles from blues to hard rock, metal of all kinds, punk and goth. We continue to listen to much of the same as we always have.

13.How would you describe your views on Occultism?
We embrace occultism. I am a nordic pagan and Legion is spiritual, but unaffiliated with religion.

14.What are some of your non musical interests?
We like being out in nature and creating art. We enjoy going out to goth clubs and metal concerts.

15.Before we wrap up this interview, do you have any final words or thoughts?
It was a pleasure to take part in this interview and we thank you for taking interest in our project!

https://www.facebook.com/darkreverenceband/
Posted by OccultBlackMetal at 6:44 PM No comments: