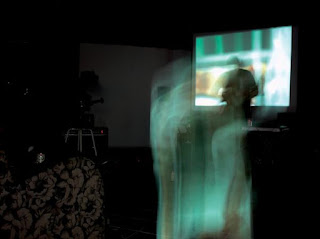 1. Can you give us a brief history of the band!
Ben and I have known each other for about a year and a half now and have been playing music together in an Ambient/Instrumental band called NORTHERN VALENTINE. We started BRCR awhile back to explore our fascination with dark ambient/drone/doom/black metal and it has become an obsession for us.

2. What releases have you put out so far!
We are currently working on recording and mixing our first full length album tentatively called, "PRAYERS FROM THE ROTTING SOIL"

3. When can we expect new material!
The Album should be done sometime in March and will most likely be released by GEARS OF SAND RECORDINGS

4. Are there any plans for a tour!
We haven't talked about it yet! We both have many other things going on(family, work, and hordes of other projects)but things are going so well and this has been so amazing so far, I certainly wouldn't rule it out!

5. What are some of the best shows you have played so far!
This has been a studio only project so far but we are playing two shows in March and hopefully many more as time goes on. We will be booking as much as possible!

6. How would you describe your sound to someone who has never heard you before!

7. What are some of your main influences music wise or non music wise, I can hear a bit of Abruptum and Black Pentacost in your sound!

We are both really into Abruptum and black metal in general. WOLVES IN THE THRONE ROOM, MOSS, NADJA, ASVA,NEUROSIS, NAPALM DEATH, LIGHT OF SHIPWRECK,PRURIENT,DARKTHRONE,CRASS, are some bands that I think have directly influenced us. I'm not familiar with Black Pentacost but I'm gonna check them out as soon as I'm done writing this up! As far as non-musical influences I always have my head in a book, reading is a huge part of my life. I also have a huge affinity for the outdoors.

8. What rule does Satanism, Occultism, Left Hand Path or Anti-Christianity play in your music and life!
Satanism, the occult, ect. have been fascinating to me since I was a young kid. I'm sure they are an influence on our music as well, but for the most part this band draws its influence from natural disasters and ecological devastation and the awe that comes from the realization that you are not at the top of the food chain, and not the center of the fucking universe.

9. What are some good books or films that you would recommend!
As I said earlier I am a huge reader. I just finished a fantastic book by ROBERT KULL called, "Solitude:Seeking Wisdom In Extremes." The author spend a year in solitude in the Patagonia wilderness. Intense, brutal stuff, very fucking metal! I love books on Arctic Exploration. "In the land of the white death" by Valerian Albanov and "Noose of Laurels" by Wally Herbert are two of my favorites. Basically, if it's good writing I'm into it, mysteries, politics, spirituality, nature writing, philosophy, history. If its good, its good. Lets see, films.. I recently saw and loved "No Country for old men" and "In The Year Of The Pig"(documentary about the Vietnam war)

10. What are you listening to these days and what good bands that you would recommend!
There is no shortage of great stuff. I've currently been listening to a lot of OM, ASVA, NADJA, MOSS,BLACK FLAG,CASKET ARCHITECTS. Some great experimental stuff, HUMANS ARE THE WORST INVENTION, BELLTONE SUICIDE. Some great ambient stuff as well, ANDREW WEATHERS, MY EMPTY PHANTOM, anything on GEARS OF SAND, FDH, OR SILBER RECORDS.

11. How would you describe the music scene in the East Coast and what are some good bands that you would recommend!
The scene out here is probably about the same as it is anywhere. You got some really great, dedicated, inspired and interesting people that I'm so glad to know and be involved with and of course, you have tons of jerks. I would recommend checking out anything on the above mentions record labels, GEARS OF SAND, FDH and SILBER RECORDS.

12. Any final words!yes! Thank you so much for the interview, it means a lot to us. BLACK ROLLER CROP ROTATION is going to be very very busy in 2009 so please get in touch with us. We are really nice people. Thanks again! -Jeffrey

13.Thanks for the interview!

https://myspace.com/blackrollercroprotation
Posted by OccultBlackMetal at 3:20 PM No comments: