1. Can you give us an update on what is going on with the band these days?


We have just put out our first album, 'Voyage from Vinland' as well as our first music video for our song 'Pints Held High'. We are writing, rehearsing and playing shows more than we ever have before. We've had the opportunity to play our local area with some larger bands this year. Also, the 2nd album is coming along quite nicely!


2. How would you describe the musical sound that is presented on the new album?


The sounds you might hear on 'Voyage from Vinland' range from folk, celtic, symphonic, thrash, traditional, ambient, death metal, black metal and everything in between. Most importantly, it is Bolero.


3. What are some of the lyrical topics and subjects the band explores with the music?


Our lyrical approach on this album varies from song to song depending on the mood and atmosphere of the music. On Send of the War Summons, the lyrics were written about a savage attack on a settlement and being through the perspective of those at the spear point and the assailants simultaneously. On the other hand, A Silence Prolonging (the albums' acoustic song) depicts the psychological and physical falling of a great conqueror as his victories only fuel his willingness to die. We never intended on it in the first place, but the album ended up becoming a story from start to finish.


We decided on our band name (and I should state right now that everything that we do in this band is deliberate and thought out well in advance) after Maurice Ravel's 'Bolero'. We decided the name personified everything we wanted this band to strive for musically and logistically. These traits include direction, flow, change and diversity.


It seems that every show we play becomes the new 'best' for the band in general. The songs feel smoother than ever to play live. Some of the best shows of the past year though might include our CD release party for Voyage from Vinland. This was one raucious party. The beer flowed as much as the hair did. Good times all around. Another notable one was the last time we played with TYR and Crimson Shadows. I would describe our stage performance as being a party in fast forward. Lots of energy, movement and alcohol fueled positive atmosphere. We love our fans.


6. Do you have any touring plans for the new release?


We are taking what we're getting at this point! Right now we do have some plans to cover Central and North Ontario change as well as a few jaunts into Quebec in September for the hell of it. We have some larger shows planned for the Autumn, but of course that is all I can say about that at this point.


7. Currently you are unsigned are you looking for a label and if so, what kind of label do you feel that would be a perfect fit for the band?


At this point in the band's development, we are passively seeking label representation and are open to any offers that may come along. We have an excellent manager and an excellent publicist right now and are very happy with the growth we are seeing.


8. I have been noticing for the last few months that there has been more bands coming out of Canada playing the folk metal style and that is something I have not seen in the U.S even though when bands of that genre play down here there is a decent crowd, do you feel Canada adopts the European culture alot better than the Americans?


I really think it depends on what regions of Canada and the United States you are looking at when it comes to the influence of European culture. For us, the majority of this resides in Quebec (particularly Montreal).


9. Are there any side projects besides this band or is this a full time line up?


At this point, we all have jobs and this band is the only musical project we are all involved in.


10. On a worldwide level how has your music been received by folk metal fans?


Overwhelmingly positive. It is always awesome to hear a supportive fan in person talking about how much they enjoyed your album or your set, but when you begin seeing 10/10 reviews from Italy and Finland, it begins to stir some different vibes of satisfaction. Other than that, we cannot complain with the great feedback we've been getting not only from the folk and epic metal fans, but fans of music in general.


11. What direction do you see your music heading into on future releases?

Definitely more intelligently written music from hereon in. We want to keep the same epic and major scale melody feel as that is a huge part of our sound. We might see longer songs, more clean singing, who knows?!


12. What are some, bands or musical styles that have influenced your music and also what are you listening to nowadays?


13. What role does Paganism play in your music and how would you describe your views on this topic?


It does not play any part in our music besides in the lyrical themes and only from an outsiders view. None of us are religious nor do we feel we have any need for it. I think Paganism is a term used too loosely and ignorantly nowadays, especially when it comes to being used to describe this sort of music. But from that sort of standpoint, we are relatively neutral and uncaring.


14. outside of music what are some of your interests?


We all obviously have different interests outside of music which include cars, videogames, bonfires, roadtrips, drinking. All the good things this life has to offer!


15. Any final words or thoughts before we wrap up this interview?


Thank you very much for the opportunity and best regards!

Posted by OccultBlackMetal at 11:24 AM No comments: 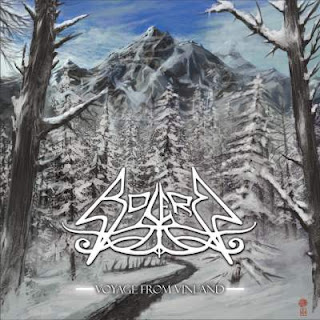 Bolero are a band from Toronto, Ontario, Canada that mixes Celtic folk metal with melodic black metal and death metal and this is a review of their self released 2011 album "Voyage From Vinland".


Drums range from slow, mid paced to fast drumming with some blast beats being thrown in at times, while the keyboards and flutes being a very atmospheric, symphonic and Celtic folk music feel to the music, as for the bass playing it has a very strong and powerful tone with riffs that dominate throughout the recording.

Rhythm guitars range from slow, mid paced to fast riffing that combines influences from Celtic Music, folk metal, melodic black metal and death metal with a great amount of melodies being thrown in the music, while the lead guitars are very melodic sounding heavy metal guitar solos and leads, as for the acoustic guitars when they are utilized they being a very medieval sounding Celtic folk music feel to the music.

Vocals combine high pitched screams that are influenced by both black metal and melodic death metal with deep growls and clean singing male and female vocals, while the lyrics cover Celtic Mythology, Paganism and War, as for the production it has a very powerful, heavy and professional sound and you can hear all of the musical instruments that are present on this recording.

In my opinion Bolero are a very good Celtic folk/black/melodic death metal band and if you are a fan of this style, you should check out this band. RECOMMENDED TRACKS INCLUDE "Send Of The War Summons" "When Legends Die" "O' Hail To The Northlander" and "Way To Forgotten Lands". RECOMMENDED BUY.

http://www.youtube.com/watch?v=dlaCcVvVfVY
Posted by OccultBlackMetal at 12:30 AM No comments: