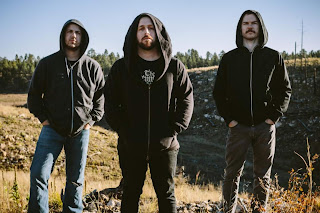 Of course! We’ve been a 3 piece (Myself, Tyler, and Ryan) for just about our entire time as a band. (Drummers have been hard for us to come by, minus a few talented studio musicians) We started in early 2017 with the main intent being that we felt our local scene was lacking in the specific style we aim for, so we sought out to change that.

2.Recently you have released a new mini album, musically how does it differ from your previous full length?

I’d say it’s a good bit different while still keeping to our roots. We got a lot of “deathcore” comparison on our first album, which wasn’t the intent lol, but this new release hasn’t seen as much of that, so we’re happy. The orchestration is much more epic this time around (thanks to Francesco from Fleshgod Apocalypse), the riffs and progressions are catchier (in our opinions), and the song structures are a little more mature than our first album.

3.The lyrics on both of the recordings have a concept to them, can you tell us a little bit more about the story that you cover on both albums?

To keep it as short as I can, our music has revolved around this story that Tyler (who is an English major) has been writing since we formed the band. Our first album begins with our main character, Oranys, waking in a field on an almost Earth-like wilderness planet, with no other intelligent life. This place is a purgatory of sorts known as “Ov Lustra”. Oranys was exiled here as a punishment, along with his loved one, Azure, who actually ends up dying. Oranys first has no memories or recollection of who or where he is, and the journey across Ov Lustra that follows is what our first album entails. His search for answers, which brings back his memories and details what he must do next. This new release, Tempestas, follows directly after the first album, detailing our characters feelings of loss/rage after recovering his memories and recalling the reason for his exile and Azure’s death, as well as his route for escape from Ov Lustra. It’s a rather in depth story that Tyler is actually writing entire books about, so I don’t want to give away too much right here.

4.Originally the band was known as 'Sun Speaker', what was the cause of the name change and also the meaning and inspiration behind the name 'Ov Lustra'?

We received a cease & desist letter from an artist who trademarked the Sun Speaker name after our first album released. We did what we could to try to retain the name, but did not succeed. So, we decided to try to keep things somewhat familiar to our followers and went with “Ov Lustra” because it was the title of our first album and an important location in our concept story.

The artwork on the new cover was perfect for this release as we wanted to try to give a glimpse into what we envisioned some of the landscape of Ov Lustra would look like.

Well, due to our struggle with finding live drummers, we have actually only performed live once as a group, however, it was a great show and we had amazing support from our local scene. We do have plans of making more live appearances though.

At the moment, no. But, we are in talks with a new drummer, so that could change soon.

8.On a worldwide level how has the reaction been to your music by fans of black, death and symphonic metal?

We’ve actually gotten a better reaction than we initially anticipated when we started, which is amazing and humbling. We’ve received mostly all positive feedback, with the exception of a few haters, but that’s all good with us. We just like creating music for those that care to listen.

I’m glad you ask. We toned down some of our “deathcore” elements in Tempestas in favor of more blackened progressions and riffs. Moving forward we plan to further move our sound to a more black metal focus, while still retaining some of the death metal riffs and such we are known for at the moment.

Overall, I’d say our biggest influences for this group have been Behemoth, The Black Dahlia Murder, Fleshgod Apocalypse, and Fallujah. I’ve been on a major Dark Funeral/Hate binge the last couple months though

11.Does Occultism play any role in your music?

To a degree, yes. It’s not apparent at face value, but a lot of the detail/premise behind our story is our own fictional rendition of Christianity’s early history. We put our own spin on the creation of man, Adam and Eve, God, and more. We do so in a VERY cryptic way, which honestly only reading the actual story would make more noticeable. However, we do plan to eventually publish these stories, so there is hope yet to discover our secrets yourself!

Outside of the band, Im also an audio engineer and graphic designer. Music is part of my daily life. But when I need a break I work on designing stuff, photography, and the like; which is actually my day job. I’m just an overall creative person.

I’d just like to let any readers know how grateful we are for the support we have received thus far. You all have been so good to us and we hope to keep pushing out music you will enjoy.

Posted by OccultBlackMetal at 5:08 PM No comments: 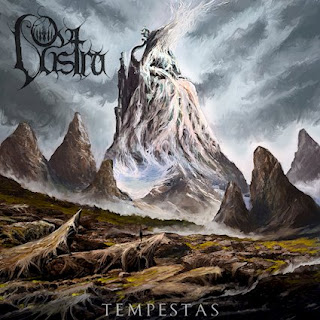 Clean  playing  can  also  be  heard  in  certain  sections  of  the  recording  along  with  all  of  the  musical  instruments  having  a  very  powerful  sound  to  them.  Choir  vocals  can  also  be  heard  in  some  parts  of  the  music  while  one  track  also  introduces  stringed  instruments  onto  the  recording  and  as  the  album  progresses  some  of t he  mid  tempo  sections  add  in  slam  style  breakdowns  and  the  last  4  tracks  are  orchestral  instrumentals.  The  production  sounds  very  professional  while  the  lyrics are  a  concept  album  involving  a  character known  as  'The  Speaker'  and  his  journey.

https://ovlustrablacklion.bandcamp.com/album/tempestas
Posted by OccultBlackMetal at 10:22 PM No comments: