1.For those that have never heard of you before, can you tell us a little bit aboutthe musical project?

Deathronic is a Studio / Solo Project, I composed some tracks few years ago, and wanted to release those songs through an album. Deathronic Project experiments with Symphonic Black Death Metal by combining several influences such as electronic music, oriental…


2.In 2013 you had released an ep, how would you describe the musical sound that is presented on the recording?

I have many influences spanning over various Metal periods, from Old School heavy Metal, to 90’s Death Metal, Modern Black Metal, etc. With “Duality Chaos”, I wanted to express my seamless view of Metal, where all the styles are permitted, without focusing on one specific trend of style. The track Bloody Lust for example, has a heavy metal influence while Kalila Wa Dimna is more symphonic. I also experiment clean vocals in the track Anno 1423 which can be considered more gothic or doom.


Regarding the recording process of “Duality Chaos”, it took place at the Parlour Studios, in Kettering, UK, and it was produced by Neil Haynes. The vocals were recorded at the Audio Sound Art Studio in Berlin and engineered by Laurentx Etxemendi (Former Gojira’s Live Sound Engineer.). "Duality Chaos" was mixed & mastered by Fredrik Nordström and Henrik Udd at Studio Fredman, the famous Gothenburg Sound!


3.What are some of the lyrical topics and subjects you explore with your music?

The Concept behind Duality Chaos is human violence. The idea is to denounce how humans are still, today, bestial beings. The unending conflicts and wars are a perfect example of this. Mankind continues to kill for irrational reasons. I think that the origin of that violence is the internal duality of human beings (the struggle between Good and Evil). Many of the worst atrocities are perpetrated in the name of subjective notions of good or bad… A duality that gives birth to chaos…We still see every day, unsupportable choking images of  bloody wars, killed children… that violence cycle is still the cancer of Humanity… and this is not the progress!

4.What is the meaning and inspiration behind the 'Deathronic'?

Well, The name “Deathronic” is, first of all, an homage to Chuck Schuldiner, an artist who influenced several generations with his masterpiece project « Death ». The other part of the name refers to my electronic music influences, which I wanted to introduce into my compositions.


5.With this musical project you play all the instruments, do you ever plan on expanding the line up or ever doing shows?

I have a side band project “Heavyction” (Industrial Death Trash Metal) and we are currently preparing an EP and also live shows during which we could play, may be, Deathronic’s Songs…

6.The ep was released on Mighty Music, can you tell us a little bit more about this label?


My collaboration with Mighty Music a Danish Label, started after the producing process of the Mini Album. They really realize a good job promoting Duality Chaos!
I would like to thank here all the Mighty Team.

7.The album cover was designed by Seth Siro Anton of Septic Flesh, can you tell us a little bit more about the artwork who brought onto your album?

…Seth Siro Anton is a great artist and he is really supporting debut project like Deathronic. It was an honor for me to have my album’s cover made by him. The Artwork, he created, describes very well the album theme.. and also the atmosphere I wanted to transmit.


8.On a worldwide level how has the feedback been to your music by fans of the symphonic, melodic and extreme genres of metal?

I was very pleased with the positive feedback and the several encouraging press articles I received… especially with this being my debut release. The songs Kalila wa Dimna & Disharmonia Part II … was nominated in the Independent Music Awards (Metal Song Category). I was really surprised and pleased by this nomination.

9.When can we expect a full length album and also where do you see t=yourself heading into as a musician in the future?

Well, I’m currently focusing on my side Project “Heavyction” but I’m also working on next Deathronic’s release, the next album, a full length one. Several songs are ready but I will take the necessary time to release it.

Philosophy (especially Derrida’s Trend of thinking), Economics, Technology (I'm working in the field of Information Technology), History, Ecology… and I use some of those interests to build artistic concepts, for example on ”Anno 1423” Music Video that describes a projection of a post apocalyptic environment …

Posted by OccultBlackMetal at 11:56 PM No comments: 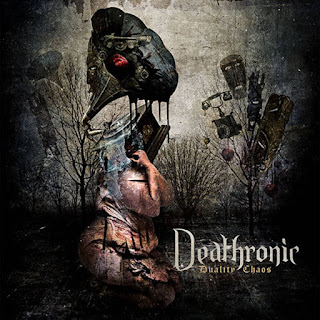 Deathronic  plays  a  musical  style  that  takes  the  symphonic  side  of  black  metal  and  mixes  it  with  melodic  death,  goth,  doom  metal,  and  a  touch  of  electronic  and  oriental  music  to  create  a  musical  style  of  his  own,  the  production  sounds  very  professional  while  the  lyrics  cover  human  violence  themes.

Posted by OccultBlackMetal at 8:46 PM No comments: