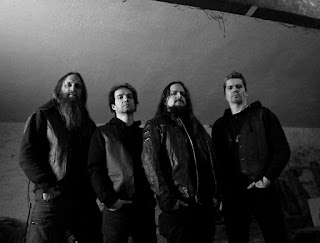 
1.For those that have never heard of you before, can you tell us a little bit about the band?
Our Band is called Ontborg and an all the members are based in South Tyrol, which is situated in the North of Italy. Three of us were part of “Voices Of Decay” for 20 years, and after the split-up we decided to found this new band to take a different direction. Harald on bass guitar completes the lineup, he played with Graveworm for many years and is the same age as we are, so the band chemistry works fantastically.

2.Recently you have released your first full length, can you tell us a little bit more about the musical style you went for on the recording?
With this album we would like to pay homage to the sound of the albums we grew up with. We wanted to record a straightforward album, with the spirit of bands like dismember, benediction and dissection. Besides the rawness we tried to keep the songs melodic at the same time, so we think it`s a mix between old school death metal and blackened melodies.

3.The band formed out of the ashes of 'Voices Of Decay', what was the decision behind breaking up the band and forming a new one?
We all felt it was time for change in every way after this long time. We wanted to purify the sound, going back to our roots and restart with new energy and passion.

4.What are some of the lyrical topics and subjects you have explored so far with the music?
Most of the lyrics don‘t have a special story or background, the focus by writing the lyrics was more set on how they translate the dark feeling and atmosphere of the song.

5.What is the meaning and inspiration behind the name 'Ontborg'?
Ontborg is an imaginary name, composed by two swedish words: “ont” means pain and “borg” means castle. The idea behind that, was to convey the feeling of gloom.

6.Can you tell us a little bit more about the artwork that is presented on the new album cover?
The cover artwork was created by the very talented Juanjo Castellano from Spain. Figuring out how creating the cover was a matter of minutes. We send him 3 covers we liked, mentioned things we don’t like in general on covers, and he came back with that awesome painting! We changed nothing, it was just perfect for our music and he nailed our taste right away.

7.What are some of the best shows that the band has played so far and also how would you describe your stage performance?
To be honest, with Ontborg we didn`t play any show until now. With Voices Of Decay we were on stage for many times and we had a lot of shows to remember. Now we decided to record the album first. On the release day of the album we have our first gig, after that some shows are already confirmed and we are looking forward to perform our songs live on stage. We think we are, like with Voices Of Decay, a very energetic band on stage.

8.Do you have any touring or show plans for the future?
As said before, some gigs are already confirmed, like the “Rock im Ring” Festival in Italy with Bands like Enter Shikari, Eskimo Callboy and Rise Of The Northstar. We ware looking forward to play as much as possible, maybe there will also be the possibility to do a small tour.

9.Currently you are unsigned, are you looking for a label or have received any interest?
For this album we didn`t look for a records label. We wanted to do all by our self. But for the next album it would be interesting and maybe there will be the possibility if this album is well received.

10.On a worldwide level how has the reaction been to your music by fans of melodic black and death metal?
We're getting the first reviews these days, so we are very curious how our sound will be received in the different countries. We must to remember that we are playing a kind of death metal sound that was popular 20 years ago, so we can't say what the reactions will be.

11.Where do you see the band heading into musically during the future?
We have no concrete plans for the next release at this moment. For sure we will stay true to this old school sound, but still try to improve the songwriting and not to repeat ourselves.

12.What are some of the bands or musical styles that have had an influence on your music and also what are you listening to nowadays?
Our influences are clear to hear, Unleashed, Dismember, Necrophobic, Entombed, Dissection, all the great bands with a Scandinavian sound and unique spirit from the late nineties. Beside these influences every band member hears very different sounds today.

13.What are some of your non musical interests?
Also the non-musical interests of the band members are very different. Lukas runs a recording studio besides his work, Christoph writes books, and Harald is self-employed.


14.Before we wrap up this interview, do you have any final words or thoughts?
Thanks for the interview and interest, and we are looking forward to see some of you somewhere live in front of the stage! 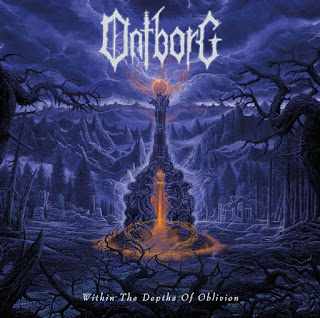 Posted by OccultBlackMetal at 9:17 PM No comments: