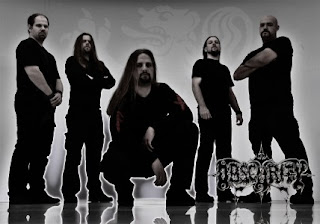 Well, the new album “Obscurity” hit stores now half a year ago and so we have some busy times at the moment. The hard work creating the album gives away to the fun part in terms of going out on the roads for live-activities, having interviews and all that stuff. Especially our very successful European tour in October/November 2012 with Kampfar, Helrunar and Velnias was a big blast. We just came back from a festival gig (Ragnarök 2013) in Germany which was as exciting as it can be. We pick out concerts and festivals very carefully just to be able to provide fans the best shows we can offer. Meaning things are going pretty well for us and we are looking forward to the things coming in the future.

2. How would you describe the musical sound of the new album and how it differs from previous releases?

Well, we already said even in the very early days (15 years ago), we play Battle Metal. That´s exactly the style of the new album “Obscurity”. One can say it´s a mix of Death/Black/Viking Metal with pagan and martial lyrics. The music doesn´t differ that much from the previous two albums. Of course we have some shifts, but you always get a true Obscurity album when you buy one. We always try to put in new elements, speaking of lyrical style and so on. It´s a good mix of our very own music style with fresh, new elements and great sound. We remain true to our sound and push it forward to a higher level. Nevertheless the album got some originals to offer. If you need some good Battle Metal to get you a kick in the butt or that gives you the power to kick butts, well, then Obscurity is the first choice, hehe.

3. What are some of the lyrical topics and subjects the band explores with the new release?

As we try to tell tales with our lyrics rather than put just some catchy phrases together, you will learn some things about the Christian church as an institution (In nomine patris), you´ll get a sing-along anthem called “Obscurity” (yeah, after fifteen years we dared to sing about ourselves and our army of fans). There´s a tale about the ancient germans and their path (Germanenblut), you can listen to the fearless warscream of some northmen which will invade your shores with their longships (Strandhogg).  Another song is about a warrior who walks the path of life alone, fights against the struggles life can offer, it is also an homage to Quorthon, the Bathory mastermind (Ensamvarg). You can dive into the times of the four eschatological disasters which are the prelude to the doom of the gods in northern mythology (Blutmondzeit, Jörmungandr, Weltenbrand and Fimbulwinter). These four songs are a mini-concept and if you are into the northern mythology you will like it. Then again we have a true sing-along anthem, a martial no-retreat-order/death-or-glory march (Kein Rückzug). The last song comes as a surprise since it features softer, darker sounds, yet without lacking heaviness and gloomas. It deals with a warrior´s final journey to Valhalla (So endet meine Zeit).

One cannot really put us into a very special or even single metal genre like just Black Metal or just Death Metal or just Thrash Metal or just Pagan Metal and so forth. We offer our very own style with a lot of different genre elements. We never intended to stick just to one genre because all members of Obscurity have their own favorites and tastes and we thought that would be too boring to us and the listeners. We believe in that right on from the beginning and as our music is not precisely definable but rather a bit of twilight between a couple of genres, we have chosen the name Obscurity. And now fifteen years later, things attested that we were right so many years ago.

We had quite a bunch of shows which are unforgettable experiences to us. I just want to name a few here. At the Ultima Ratio festival in 2008 we had the first slot to play at 12.00 am which isn´t always a good slot but at that day over 3.500 fans screamed out loud for us for about 15 minutes before we entered the stage. I still have a video with the sound of the audience. All three Ragnarök festival shows are very special. In 2010 and 2013 we set up shows with pyrotechnics and such stuff. We almost set the whole Ragnarök festival on fire… but the audience went totally crazy and that released incredible power to us on stage. In 2010 we entered the stage at around 2:30 in the night. Normally there are only few people still in front of the stage but at that day it seemed that almost everyone was waiting for us. So what followed was a very, very intense party for us and the fans. Furthermore is our European Tour in 2013 a memorable experience in our lives.  It is really a tour to remember.

We are very lucky to have some special shows and encounters during our career and we are grateful for those experiences we will never forget. We have to thank our fans for having such blasts again and again. Thank you wherever you are, guys!

We have scheduled some selected festivals and headliner-shows for 2013 but another tour so quick after the one in 2012 isn´t planned yet. Of course we are talking about a tour and have some stuff in mind but it´s nothing settled yet.

7. Currently the band is signed to TrollZorn Records, how did you get in contact with this label and how would you describe the support they have given you so far?

In 2007 we considered if we want to continue our work with Massacre Records. The Massacre guys did a good job for us but we felt that we maybe will have to move in a different direction. At that time we met Kai and Stefan from Trollzorn at a festival. They had a merchandise booth there (they have also a mailorder site) and saw our performance. After the show they came to us and wanted a couple of shirts and such stuff for their mailorder business. We kept in touch and a couple of months and conversations later they asked if we were interested in working them. That´s one of the famous lucky incidents you need in life. We became partners in crime, friends and have a successful and pleasant cooperation since those days.

They always supported us very bravely. We don´t have any restrictions and can do whatever we want, because TrollZorn knows that we always give the best and same goes for them.

8. On a worldwide level how has the feedback been to the new album by fans of Viking Metal?

So far we got a lot of excellent reviews and recognition from both the magazines and fans from around the world. It still astonishes us, as we never thought that a band with German lyrics would even hit the attention of people from Indonesia, Saudi Arabia and Ghana for example. Ok, there´s Rammstein with German lyrics but we aren´t Rammstein, hehe. Anyways, again we can be grateful to have dedicated supporters all around the world. This is extremely exciting and we wish to visit all those guys with a cool live-performance. Unfortunately that is not possible.

Hmmm, in the same direction as it´s heading since a couple of years now. We don´t have to change things radically just for the sake of seeming progressive. We like the music and the way we create our stuff. We still have great fun on our path and people enjoy our work more and more. There´s no need of big changes. Of course we wanna have evolution or better improvement to our music, as we add different new elements to our sound, music and lyrics, but I think if you will buy an Obscurity album in the future, you will always know what you get. Pure Obscurity! Iron Maiden doesn´t invent themselves for over twenty years now. If you buy their albums you may be disappointed until a certain point but you must admit it´s still Iron Maiden. Yeah, yeah, I know we aren´t Iron Maiden and I don´t really want to compare us with those heroes of Heavy Metal, but the principle is the same.

10. What are some bands or musical styles that have influenced your newer music and also what are you listening to nowadays?

Actually we never had any strong ideals which influenced our music. We are five guys with different metal styles. There are intersections in tastes, but those really didn´t find their way into our music. Let´s say there are some bands which we adore and we try to bring the same power on stage like them.

There are a couple of bands which are still prominent in our music systems. Bands like Unleashed, Dismember, Hypocrisy, Anthrax, Maiden, Slayer, Primordial, Enslaved, Bathory, Immortal and so on. We are a bit older now and we definitely listen to new bands, as well, but we are kind of old-school buddies.

11. How would you describe your views on Paganism?

Ahh, that´s a hard question because it´s always hard to give a proper answer which covers this vast topic. It is not only about being dismissive against the Christian church or other religions and to wear kiddy T-shirts with the print “Odin not Jesus”. If you have troubles with world religions, that´s ok for me, as long as you respect people with different cultures and religious background. None can prove you are right and blame you for that, but you can´t prove it either. You need to have a strong faith in yourself and your way to interact socially with other persons. All the rest about old gods, the old mythologies and so on are well-known and I think you don´t need me to explain that for the seemed like hundred´s time.

Some of us are very deep into history, like myself. We are very busy with our jobs, our families and kids, we watch a lot of movies, travelling around to learn more of foreign cultures and people, I love Star Wars and the rest of us loves beer. That´s it, hehe!

13. Any final words or thoughts before we wrap up this interview?

Thank you for having Obscurity on this interview. It´s an honor and I hope we can arrange a live show anytime in your neighborhood, hehe. I hope the readers didn´t fell asleep already and you enjoyed the interview as much as I did.
Remain true to yourself and Metal on!
Thanks a lot!
Ziu/Obscurity

Posted by OccultBlackMetal at 12:53 PM No comments: 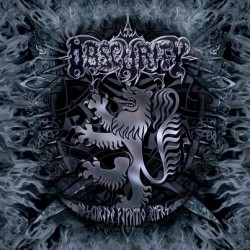 Rhythm  guitars  range  from  slow,  mid  paced  to  fast  riffs  that  combine  melodic  black  metal  with  death  metal  together  to  create  a  sound  of  their  own,  while  the  lead  guitars  are  very  melodic  sounding  death  metal  guitar  solos  and  leads  that  utilize  some  traditional  metal  influences  at  times,  as  for  the  classical  guitars  when  they  are  utilized  they  use  finger  picking  and  full  chords  to  being  a  medieval  feeling  to  the  album.

Posted by OccultBlackMetal at 3:28 PM No comments: