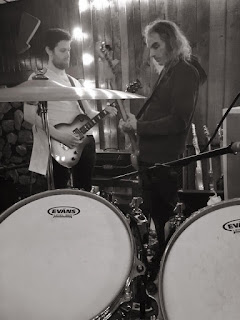 1.For those that have never heard of you before, can you tell us a little bit about the band?
Enhailer first formed in 2014 in Akron, Ohio.  The bassist (Michael Gilpatrick) and drummer (myself) originally came from another band together that went on hiatus, so we decided to start a new project.   The first couple of years, we had a hard time maintaining a consistent lineup with other members, but over the past year or so we have been able to lock in a really good band of guys whom enjoy hanging out and playing together a lot which is important.

2.How would you describe the musical sound that is presented on the recordings?
There isn't really a direct way to answer that question because our sound has changed somewhat over the different recordings--between the demo, our first LP, and now this EP.  The one thing that people seem to consistently touch on in reviews is a progressive doom sound.

3.Originally the band was instrumental but the new ep has vocals, what was the decision behind going into this direction?
The last LP did have some vocals on it, but they were sparse.  We always wanted to try experimenting with vocals as another instrument rather than a lead position in the band, but we never had a member who really wanted to try doing it.  When Matt joined, he had the chops, so we let him run with it.

4.What are some of the lyrical topics and subjects the band explores with the music?
We like to explore Kittens and cats, satan, weed, you know, the important stuff.

5.What is the meaning and inspiration behind the name 'Enhailer'?
We were totally joking around one day, not being serious at all, while trying to come with band names.  It kind of came out of a cloud of pot smoke honestly...

6.What are some of the best shows that the band has played so far and also how would you describe your stage performance?
We've been lucky enough to play with Eyehategod ,Goatwhore , today is the day, Childbite, Ringworm and others.  Our stage performance is fucking amazing.  We have lasers and smoke machines and wild animals running around.

7.Do you have any touring or show plans for the future?
We are going to play a lot of shows over the winter and then we are going to tour in the summer.  Watch our Facebook page and other social media pages for updates coming soon on specific dates.

8.Currently the band is signed to 'Black Seed Productions', can you tell us a little bit more about this label?
I was shopping around for labels to collaborate with on our first album and I vaguely knew of Shy Kennedy of Blackseed records, based out of Pittsburgh, through some other friends.  I took a chance and sent her a message.  She's been nothing but awesome ever since.

9.On a worldwide level how has the feedback been to your music by fans of stoner, sludge and black metal?
It's been better than we ever expected. We have already mailed packages to France, Poland, Germany ect..  The whole thing has been a lot of work but it's a labor of love.  We released three albums in three years including the demo.

10.What is going on with some of the other bands or musical projects these days that some of the band members are a part of?
We are not currently a part of any other projects that Im aware of, because we are entirely consumed by this one.

11.When can we expect a full length and also where do you see the band heading into musically during the future?
We are currently working on a full length, as for our future musical explorations its hard to say. This band seems to keep reinventing its sound. Its still evolving, we love to expiriemnt with different sounds not commonly found in heavy music and yet try to find a way to weave them in with really big, heavy  parts

12.What are some of the bands or musical styles that have had an influence on your music and also what are you listening to nowadays?
We all have a pretty wide range of tastes, however for me personally in regards to Enhailer, Frank Zappa in particular has been a huge influence. Also, everything from Mastodon to Hank Williams, Sr.  As for what am I listening to, I'm really digging Sumac, which is Aaron Turner from Isis

13.What are some of your non musical interests?
I'm into woodworking a lot, painting and daydreaming lol

14.Before we wrap up this interview, do you have any final words or thoughts?
We really look forward to getting this album out on the live stage and sharing with folks.
Thanks to you and everyone else who has helped us get the word out in anyway!
P.S. Fuck Trump!

Posted by OccultBlackMetal at 7:49 PM No comments: 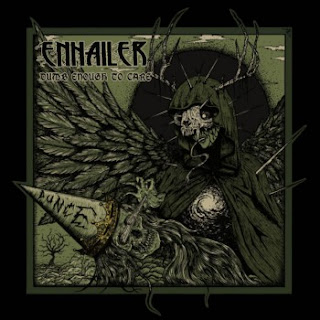 Enhailer  plays  a  musical  style  that  takes  progressive,  stoner,  doom  and  black  metal  and  mixes  them  together  to  create  a  sound  of  their  own,  the  production  sounds  very  professional  while  the  lyrics  cover  dark  themes.

https://enhailer.bandcamp.com/album/dumb-enough-to-care
Posted by OccultBlackMetal at 7:44 PM No comments: