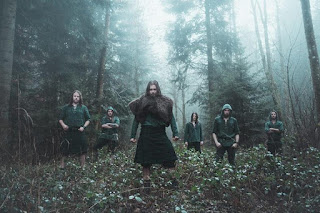 1.For those that have never heard of you before, can you tell us a little bit about the band? We are an Epic Folk Metal band from Lausanne, Switzerland. We are 6 musicians and we all have a big experience of stage in others bands. We exist for 2 years now.

2.Recently you have released an ep, can you tell us a little bit more about the musical style you went for on the recording? As we are influenced by a lot of bands and styles, we tried to mix our main inspirations to create our own universe. We did a mix between the “drinking songs” part of folk metal and the “epicness” side.

3. A lot of your lyrics are influenced by both Nordic Mythology and the writings of J.R.R Tolkien, can you tell us a little bit more about your interest in these topics? In Norvhar all of us have read books of Tolkien and many more fantasy authors.We also have a quite good knowledge of Nordic mythology, so it appeared as a natural way to us to use both of those thematics.

4. Originally the band was called 'Harmoniks', what was the cause of the name change and also the meaning and inspiration behind the name "Norvhar'? We decided to change because Harmoniks has been running for around 10 years. There were no former members in the band anymore, and we chose to change name before our 1st EP, as a “new beginning”. The meaning of “Norvhar” is quite simple actually : we had another band years ago which was called “Nordreign”, and we used the “NOR” particle. We also would like to keep something from Harmoniks so we kept the “HAR”. And finally we thought about the “visual” part of the band’s logo, so we chose to add a “V” in the middle.

5. Can you tell us a little bit more about the artwork that is presented on the ep cover? It’s been created and drawn by the swiss designer Agnès Keller, who is a good friend of us. We explained her the ideas and the concept behind “Kauna” and she did this beautiful artwork! This artwork presents the place where the story of Kauna is happening: an old and dark forest, filled with creatures.

6. What are some of the best shows that the band has played so far and also how would you describe your stage performance? We played as open act for Finntroll some months ago, it was a really nice show and a killer crowd! By the past we also opened for bands such Tyr, Moonsorrow, Black Messiah. But as far as we are on stage, despite the size of the venue or the number of people in front of us, we do the best show we can. It’s important for us because we have seen too many gigs as spectators with bands playing with sad faces because there were not as many people as they wanted etc.. Our stage performances as always full of fun and smiles, we love to play for people and we try to bring the best ambiance !

7. Do you have any touring or show plans for the future? We will be playing at Lid Ar Morrigan Fest in May, it’s a very nice festival near Nantes. We’ll also play in Lenzburg in June with Morgarten and more. The second half of 2019 will be more interesting.

8. Currently you are unsigned, are you looking for a label or have received any interest? We have been contacted by a few companies, but for the moment we are not looking for collaboration. We would like to remain the “masters” of our work, and maybe in the future we’ll be looking for a worldwide distributor.

9. On a worldwide level how has the reaction been to your music by fans of folk metal? Very positive! We received reviews and feedbacks from all over the world. We’ve sent CDs to fans in Canada, USA, Mexico, Germany and France for example, and we are also distributed in Japan by a store in Osaka.

10. What is going on with some of the other bands or musical projects these days that some of the band members are a part of? Some of us are playing in other swiss acts like AM:PM, Peace Is Just A Break, Darkrise, Murge, Mathilde, and our drummer is touring with even more bands. We are very active! We also have founded an association, called SONS OF YMIR, to promote local and international folk metal bands by organizing shows and festivals. We did the 1st edition the 16th of February and we invited Celtachor from Ireland.

11.When can we expect a full length and also where do you see the band heading into musically during the future? Actually we have already begun the composing process for the upcoming album, I think we’ll release it in 2020. We don’t want to wait too long, because we would like to climb the ladder a little bit ;)

12.What are some of the bands or musical styles that have had an influence on your music and also what are you listening to nowadays? I personally am a huge fan of the old folk metal scene, with acts like Moonsorrow or Finntroll or Ensiferum etc and I am pretty sure that the others feel the same. On a more recent point we all like the work of Equilibrium, especially the “epic” touch they add. The list is very long!

13.What are some of your non musical interests? We all work beside Norvhar, and we practice together our biggest passion : drinking beers and writing epic stuff. But we also are normal human being, so we love different kind of activities of course.

14.Before we wrap up this interview, do you have any final words or thoughts?  Dwarves will win.

Posted by OccultBlackMetal at 9:36 PM No comments: 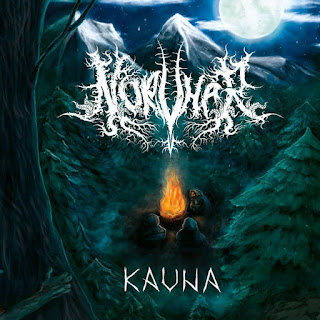 Atmospheric  yet  epic  sounding  keyboards  start  off  the  ep  along  with  some  spoken  word  parts  a  few  seconds  later  before  going  into  a  heavier  direction  on  the  following  track.  When  acoustic  guitars  are  utilized  they  also  give  the  music  more  of  a  folk  music  feeling  along  with  some  death  metal  growls also  being  utilized  at times.

https://norvhar.bandcamp.com/
Posted by OccultBlackMetal at 8:53 PM No comments: