1.For those that have never heard of you before, can you tell us a little bit about the band?
It is a female-fronted symphonic metal band from Gothenburg, created in 2013 by Olivia Strömblad, french vocalist, guitarist and keyboardist.We tried a couple of musicians before finding Alexander, who recorded drums on half of the Maze Of Melancholy album. Then Johan entered the band. He wrote the bass parts for most the songs as well as the main guitar riffs on Surface and Time To Realize. After two years in the band, Alexander leaves Fading Azalea to focus on his other band. Kristoffer Jonassen, black metal drummer (ex-Irrbloss) takes over the drums. Putting the band together is always the hardest bit, we wanted different things with music, and Johan left the band in the end of 2016. Kristoffer left short after the Maze Of Melancholy release to focus on other projects. Now it's only Olivia left, composing for the band's next album and working to build a new, stabile line-up. In a place like Gothenburg, realm of melodic death metal, very few want to join a band with clean female singing, which makes it hard to build a band. Not even Epica wants to play here!

2.Recently you have released an album, how would you describe the musical sound that is presented on the recording?
The music alternates between melodic guitar riffs, harder parts enhanced by drums that has its roots in black metal, beautiful and melancholic orchestral parts, multi-faced vocals that switch between dark low clean vocals, high-pitched opera singing, powerful hard-rock vocals and grunts. Tracks like Surface or Time To Realize had us compared to Metallica and Megadeth. On the whole album, the songs differ a lot from each other.

3.The band has been around since 2013 but waited until 2017 to release an album, can you tell us a little bit more about the earlier years?
The earlier years were spent looking for members to play and write music with. Originally my plan was to do vocals only and compose keyboard for the album, so I took a guitarist to compose on my vocals. My first musicians were really busy, making the band quite unproductive. After 2 years, I decided to write and record the guitars myself. Then the album progress went quickly, slightly more than 1 year.

4.What are some of the lyrical topics and subjects the band explores with the music?
There are a lot of moral reflections. They are about our behaviour in the western society, towards each other, ourselves or nature (Dying Paradise is about the environmental issue). In The Name Of Justice and Heart of Darkness are on the angry and bitter side. Then the songs fall deeper into melancholy, with dark thoughts we all can come through on our unsuccessful days (Fall Of The Mask, Here I Am Again), since we in the western society have big expectations about how life is supposed to be and to become. But L'ombre Derrière l'âme (Shadow Behind The Soul) is a philosophical reflection that resume quite well what the whole album is about, appealing us to get stronger through acceptance. Burning To Ashes is about death and mourning.

5.What is the meaning and inspiration behind the name 'Fading Azalea'?
It's a fading flower. We people are like flowers, we want to bloom and find happiness, fulfill our dreams. If we don't, we fade. Since most of the topics are dark and melancholic, Fading Azalea was a better name than Blooming Azalea! Then there is also a pony with the french name "Azalee" which means so much to me, but please don't mention that, haha!

6.What are some of the best shows that the band has played so far and also how would you describe your stage performance?
We had a nice show at the Emergenza contest earlier this year, with two guests, on bass and guitar. There were a lot of people and many voted for us, so the show seemed appreciated! There is no soundcheck for the gigs organized by Emergenza, so we had problems hearing the backing tracks and each other, but we did good despite the conditions.

7.Do you have any touring or show plans for the future?
That's for sure, if I can put together a decent and stabile line up.

8.On the new album you had a few guests, can you tell us a little bit more about who they are and also their contributions to the recording?
We have Rafael Basso on growl on "In The Name Of Justice". He also sings the tenor and bass part on Where I Belong final choir. He is vocalist and guitarist for the band Unlit Face. That was before the time I discover I could growl too hehe. After Johan left the band, Gianluca Di Francisca recorded the 4 last pieces left in his studio in Italy, which are Dying Paradise, Burning To Ashes, Heart Of Darkness and Flames Of Death. He did a wonderful guitar solo for Heart Of Darkness too. He works on his solo project Gianlux. Our first drummer, Alexander, now member of the metal band Temper Fi recorded the first half of the album (Surface, Time To Realize, Here I Am Again, I Lost My Way, Where I Belong) and Kristoffer recorded the rest.

10.On a worldwide level how has the feedback been to your music by fans of symphonic and extreme metal?
It's been mostly positive and beyond expectation for a first album. The vocals were appreciated, as well as Olivia's shredding guitar solo on the Surface video which increased a lot the interest for the band. Some would complain that the songs are too different, I only see it positively since I like variation, it's the way it was meant to be.

11.Where do you see the band heading into musically during the future/
I think there will be more opera vocals. Otherwise we will continue into melodic metal, with that mixture of black and death metal. But you never know, we are looking for new members which might bring some new influences to the music!

12.What are some of the bands or musical styles that have had an influence on your music and also what are you listening to nowadays?
Epica and old melodic In Flames are my absolute favourites, they have clearly influenced me when it comes to composing. Opera and classical music are other influences. As for Surface and Time To Realize, there is clearly that Metallica touch, since those were the two pieces where Johan, our previous bass player, wrote the main guitar riffs. Nowadays, I listen mostly to symphonic metal with opera vocals like the early Amberian Dawn, Nightwish or Beneath My Sins. Dimmu Borgir and Green Carnation too are in my top 5.

13.What are some of your non musical interests?
I love traveling to snowy places, mostly those where I can practice skiing and snowboarding. I recently visited Alaska, Svalbard and Greenland. Snow and ice makes me happy, I'm a like polar bear in the soul! This is what inspired the last song of the album, Where I Belong. It's about the melancholy I feel every time when i come home from one of those trips, leaving the beauty of the cold behind me for a couple of months which feel like an eternity. This song is heartfelt...
Other things I enjoy is growing my own vegetables, a good retro video game with Mario and Yoshi or watching X-Files. But music does not leave much time for that.

14.Before we wrap up this interview, do you have any final words or thoughts?
Fading Azalea will release a single for the song "Fall Of The Mask" on May,1st. It is the first version of the song, recorded in studio, with Alexander on drums. I am also working on a music video for Where I Belong, with some scenes taken from the Greenland and Svalbard sceneries. Besides, any fan of rock and ambient music with great orchestral parts should discover my side project with Norway called Hall Of Mountains, where I contribute with vocals.
Thank you for your interest! You're welcome to contact me if you have further questions.
Olivia Strömblad & Fading Azalea

Posted by OccultBlackMetal at 9:21 AM No comments: 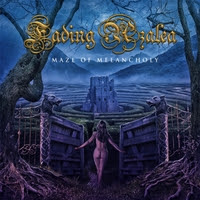 Fading  Azalea  plays  a  musical  style  that  is  mostly  rooted  in  symphonic  metal  while  also  mixing  in  the  heaviness  of  black  and  melodic  death  metal  to  create  a  sound  of  their  own,  the  production  sounds  very  professional  for  being  a  self  released  recording  while  the  lyrics cover  dark and  poetic  themes.

Posted by OccultBlackMetal at 8:14 PM No comments: